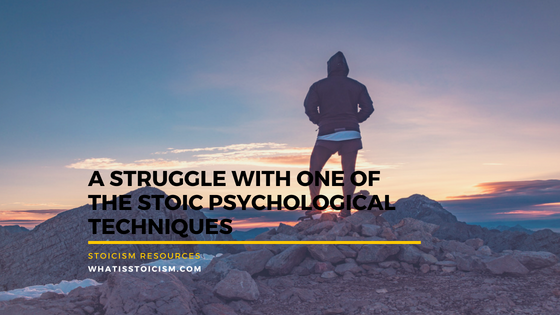 I first became aware of Stoicism after hearing people like Tim Ferriss and Ryan Holiday describe the practical benefits of the philosophy. However it wasn’t until I came across Derek Sivers notes on A Guide To The Good Life that I was really urged to explore it in more detail. On reading William Irvine’s book, Derek found his own beliefs and behaviours already lined up well with the Stoic life. His notes made it apparent that might be the case for me too.

To confirm that, I read Irvine’s book myself and was hooked. I went back and revisited any of Tim and Ryan’s Stoic-related content I could find. This led on to reading the ancient Stoics Marcus Aurelius, Epictetus and Seneca. And when you’ve consumed the material, you get excited to implement the practical elements of Stoicism in daily life.

Part Two of A Guide To The Good Life covers such practical elements. There Irvine outlines five Stoic Psychological Techniques that really exhibit how instantly adoptable the philosophy is. The five techniques are as follows –

All these Stoic psychological techniques have greatly helped me adopt a more Stoic mindset. From acts of self-denial like forgoing certain luxuries to daily journaling on my progress, it’s all been worthwhile.

What I do struggle with at times however is negative visualisation. It’s not that I find the technique difficult, but strangely that I find it too easy. My mind automatically does it way too often when I’m facing a challenge, which ends up being counterproductive.

Not just counterproductive with respect to the technique, but with respect to daily life. I worry so much about some upcoming event that it distracts me from doing things I should be focused on at the present time. In a Stoic double-failure I’m usually worrying about something that’s not within my control.

Hopefully I can make it clearer with an example. This isn’t the only situation this occurs for but it’s certainly one of them.

As a naturally introverted person I’ve often found it difficult to be in large groups for extended periods of time. Despite this, I’ve been on quite a few holidays with groups of friends that I’ve enjoyed. But after the first couple of days I’m drained from all the interaction and feeling self-conscious if there’s people there that I don’t know well.

Usually excursions like this are booked months in advance. What tends to happen after the initial excitement of booking is that I gradually get more anxious as the departure date approaches. With no prompting, my brain increases the frequency of negative visualisation ‘sessions’ and they only relate to being with this group of people. No matter how much I tell myself “that’s enough, brain – it’ll be fine”, the thoughts creep back in soon after.

In the days leading up to the start of the trip, it’ll be the first thing on my mind when I wake up and continue to bug me throughout the day. Some things even end up feeling pointless – I can’t concentrate on enjoying some other activity when I’m so worried about this trip. What am I worried about? Sometimes it’s hard to even put a finger on it. In general I think it’s the inevitable self-conscious feeling from being in a group. It gets to the point where I want to make up an excuse not to go. Then I wonder why I’m weird – everyone else can’t wait to go.

Then I go on the trip and it’s fine. More often than not it’s even better than fine, it’s really enjoyable. I come back feeling refreshed – I don’t have to worry about that trip anymore! I start taking joy in simple things that I wasn’t before – this tea tastes so much better minus the worry about that trip!

It’s probably classic social anxiety and originates from one or two bad experiences much earlier in life, when it’s even harder to be an introvert. Being branded as quiet or shy by one or two people at that stage can impose a feeling of inadequacy. The feeling builds and your own mind reinforces it – they’re right, I am quiet and shy, why am I so weird!

Later you realise that being an introvert isn’t a negative thing, it’s just a different personality type and you shouldn’t beat yourself up for exhibiting some of the traits. Stoicism has helped me with that a lot. Particularly the Stoic notion that placing too much value on the criticism (or indeed the praise) of others isn’t a good idea. As Marcus Aurelius wrote in Meditations –

During these periods of negative visualisation anxiety, I get frustrated. However I can’t help but feel if they’re actually alerting me to the things I need to do most.

“What we fear doing most is usually what we most need to do.”
– Tim Ferriss

Maybe if I keep pushing myself into situations that worry me like this then I can overpower the previous negative experiences. Maybe they’ll be replaced with positive ones and I’ll be drawing from those when I think about the next thing. Maybe that will dull the voice in my head that gets too loud as events approach.

Although the Stoic psychological techniques that William Irvine describes may never extinguish anxiety and worry, I do believe they can diminish them. And ultimately it’s better having them in your toolbox than not.

Exercise: Do An Anonymous Act Of Kindness (With 25 Ideas For Inspiration)