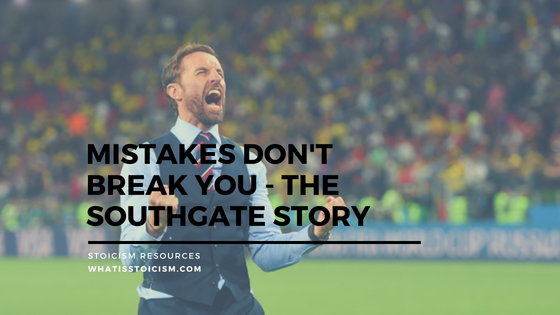 Being human, we all know how easy it is to make mistakes. We make them every day. Most of the time they’re small and inconsequential and no one else sees them, like dropping a glass on the floor. Or maybe they’re slightly more embarrassing and we try to fix what we’ve done without anyone finding out, like putting the wrong type of fuel in your vehicle.

For people competing in team sports, even if it’s nowhere near the top levels of professional competition, it’s pretty much impossible to hide your mistakes. Doing something wrong at a crucial time and ultimately letting your team down, even if you tried with the best of intentions, is always seen. You can’t close your eyes and hope it goes away. The ground won’t swallow you up as much as you want it to. It’s a lonely place to be.

No amount of arms round the shoulder or token “hard luck” gestures make it feel better if you’ve just missed the last-minute field goal, a decisive free-throw or the critical penalty in a shootout. Although it’s often useful to draw support from teammates, summoning resilience from within at these times is actually much better and more versatile – if your response to such situations where you’ll be facing a lot of scrutiny doesn’t rely on others, you can apply it to other, non-sporting adversities.

It sounds simpler than it is of course but the key is seeing obstacles not as things which inhibit success, but as things which create success. A failure in one moment can be used as the springboard to a success, potentially a much greater one, in the future. This is the basis of Ryan Holiday’s Stoicism-inspired book The Obstacle Is The Way and probably why it has proven so popular in professional sporting circles.

That probably all sounds fairly abstract at the moment but let’s look at a real example from the world of football/soccer.

Picture this. Your team is in the semi-final of a big competition against one of your fiercest historical rivals and the match has gone to a penalty shootout after ending 1-1. With the shootout now at the sudden-death stage you are the eleventh player to take a penalty. The ten players preceding you have all scored. If you miss, and the next taker for your opponent scores, your team loses. Your team crashes out of the competition and your opponents, your gloating, hated opponents, advance to the final. You miss. The next taker for your opponent scores.

In 1996 this happened to Gareth Southgate. The competition was the European Championship and with Southgate’s miss, England fell to their arch nemesis Germany. With the defeat, England’s best chance of reaching a final in 30 years disappeared. What appeared for a 25-year-old Southgate was a huge burden to shoulder.

Sensible consideration would conclude that the game could’ve and should’ve been won in other ways and that other mistakes were the reason that it even made it to a penalty shootout. It’s inevitably the dramatic last acts that get remembered however.

This was certainly the case in the immediate aftermath of Southgate’s saved kick. Keeping the defender’s failure at the forefront of their minds, up to two thousand England fans took to rioting and trashed Trafalgar Square. The penalty miss more than the actual defeat was the focus for a whole nation. It even inspired a song.

Meanwhile the typically humble Southgate was feeling the strain. “No matter how much the other players try to console me, I’m still left with the feeling that I let everybody down,” he said in a post-match interview. A heavy burden to bear under the intense scrutiny of the media and angry fans. A little later he was able to see the funny side and appeared in a mocking Pizza Hut ad alongside Stuart Pearce and Chris Waddle, who themselves missed important penalties for England in the 1990 World Cup, however the pain and introspection remained.

A new, unexpected obstacle to face. How would he react?

“I’ve learned a million things from that day and the years that followed it,” said Southgate recently.

Twenty two years on, the 47-year-old is now England’s manager. The role itself has been a poisoned chalice in recent years. Due to chronic under performance of the team since that 1996 tournament, almost every manager to take the job has left it with a worse reputation than when they started. This is where the story gets heartwarming.

The once maligned Gareth Southgate is now the toast of a nation.

Beyond all expectation, the man held responsible for eliminating England from a European Championship semi final has guided them to the semi final of the 2018 World Cup. But for an agonisingly narrow defeat to Croatia, Southgate almost delivered an elusive appearance in the final – which would have been England’s first since winning the competition back in 1966.

Regardless of the outcome, over the course of the 2018 tournament, Southgate proceeded to win over every England fan, most of whom were less than enthused when he was appointed two years ago, with his mixture of calm consideration and controlled passion.

It’s also been clear to see how he has passed on the lessons from 1996 to his players. For twenty years England have crumbled under the weight of heavy expectation, however this arguably lower-profile group of players have gone through the obstacles in their way with a resilience and humility not seen in an England team for a long time, and vastly exceeded what was expected of them.

Southgate’s men even beat Colombia in a penalty shootout to reach the quarter final – only the second time they have emerged victorious from nine shootouts in major tournaments. The all-too-familiar obstacle became the way. The coach’s instructions were clear in his pre-penalty team talk, which was picked up by TV – “We have prepared for this, we’re ready.”

England focused on what they could control – their preparation. Knowing this was already taken care of in the days before the game gave them the freedom to allow the cards to fall as they may.

Drawing from 1996 again, the resilience Southgate has instilled in his squad has consequently given them a freedom to perform not seen for a long time. “When something goes wrong in your life it doesn’t finish you and you should become braver, knowing that you’ve got to go for things in life and don’t regret because you didn’t try to be as good as you might be,” he told the media during the World Cup when inevitably asked about his penalty all those years ago.

When you make a public mistake it will hurt at first, that’s unavoidable. But it doesn’t finish you. You become stronger and braver. A little later you realise you’ve now gone through that experience, so you can cope with it if it happens again. Your resilience has increased. You can pass on wisdom to people in the same situation, make them stronger too. You focus more on the things within your control, because really, that’s all any of us need to worry about.

Although England couldn’t reach the final this time round, they restored the pride of a nation in a previously uninspiring team, and with their semi-final exit they now have that added experience that will make them even hungrier to tackle obstacles in future.

On the way to their 2014 Super Bowl victory, Michael Lombardi and Bill Belichick of the New England Patriots distributed copies of The Obstacle Is the Way to their staff and players. Gareth Southgate is providing the same lessons by example.

Tags: The Obstacle Is The Way

Social Media: The Never-Ending Battlefield At Our Fingertips