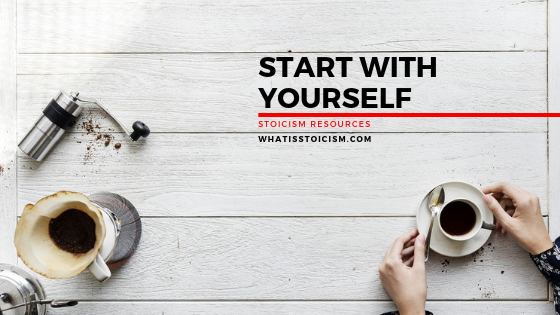 Thank you for reading this. Everyone who posts anything online hopes that someone will read it, I’m no different. Why post it otherwise? From the quick-fire Facebook status to the long-crafted Medium story, it all craves eyes.

I try to write about my thoughts and feelings, about things I’ve read, sometimes about my problems. All so I can understand them better. It’s a process – a slow trickle leaving my mind a bit clearer and more palatable compared to how it entered. Like making a pot of drip coffee, the filter examines everything that passes through, discards the unwanted and passes on what might be useful. It slowly collects until there’s enough to serve. Some people like coffee, some don’t, that’s fine.

Like the sixth rule of Jordan B. Peterson’s 12 Rules for Life, I’m trying to “set my house in perfect order “ before I even think about criticising the world. In other words, if I can change myself for the better I will indirectly change a little bit of the world for the better instead of trying to do it directly through unqualified criticism. The very first step in this, according to Peterson, is to “stop doing what you know to be wrong.” Sounds simple, but then why should it be complicated? If everyone’s efforts are directed inwards, and continue to be so, surely that can only have a positive effect on the world.

Marcus Aurelius also alluded to such introspection in his Meditations: “Whenever you are about to find fault with someone, ask yourself the following question: What fault of mine most nearly resembles the one I am about to criticise?” We can learn from others’ mistakes as well as our own. Why should I criticise someone else when I already have enough faults of my own and am open to the same criticism?

We gossip about other people and yet get offended if we find out other people have gossiped about us. I have a somewhat karmic view of this – the more you talk about others, the more others will talk about you. And how can you complain when they do? Again I can relate to Marcus Aurelius when he expressed his amazement that we all love ourselves more than other people, but care more about their opinions than our own.

In Marcus, there is no greater example of writing for yourself. His Meditations was originally his own private journal and it has gone on to become arguably one of the most important philosophy books of all time due to the lessons that others can learn from it. He constantly sought self-improvement in his writing and he has prompted the same in countless others over the last two thousand years.

But when I want to write for self-improvement, how do I know what to write about? That process starts with self-monitoring. As Donald Robertson explains in How to Think Like a Roman Emperor, if you want to conquer bad habits or destructive emotions like anger, you need to keep watch over yourself. How else can we expect to make positive changes if we don’t realise when we’re doing something we know to be wrong? After spotting the warning signs, one of the key tools for recovery is cognitive distancing – reminding ourselves that events don’t make us angry (or sad, or frustrated, etc.) but our judgements about them do.

This is something I can write about, for myself.

When I have to speak in front of a group of people, particularly in a formal setting such as a meeting, I sometimes get racked with social anxiety to the brink of a panic attack. The trigger that elicits the worst response seems to be the phrase, “Let’s go round the table so everyone can introduce themselves.”

Impending doom. I immediately know all eyes will soon be on me. My heart thumps so hard I can feel it in my ears and all the moisture in my throat evaporates. The closer it gets to my turn, the deeper the shade of crimson my face turns. It’s then in the lap of the conference room gods as to whether any noise will come out when I open my mouth.

I try to ask myself before these types of meetings, what is the worst that could happen? And even if I succumb to nerves and become a babbling, red-faced, puddle of sweat, is that such a bad thing? It might feel like it at the time, but it could be worse. As Mr Chow says in The Hangover, “But did you die?”

Not to overwork the analogy, but when you make coffee for someone else you make it the best way you know how – the way you would make it for yourself. The recipient can then add milk and sugar if they wish but what you’ve provided is a product of your own much-practised skill, honed making the beverage as well as you can for your own benefit. The more you improve, the better your offering to others is.

In explaining another of his rules, Jordan B. Peterson urges, “Strengthen the individual. Start with yourself.” Combining this sentiment with the advice in his Essay Writing Guide, it’s possible to see how powerful writing for yourself can be. The guide makes the point that writing is the best tool we have to help us think about important issues. Writing “extends your memory, facilitates editing, and clarifies your thinking.”

That point bears repeating – when you write for yourself, your thoughts become clearer. The very act of having to articulate thoughts with written words necessitates clarity. And in doing this, it’s possible to see them in a different perspective. Quite literally in the case of one of the cognitive distancing techniques that Donald Robertson describes – writing your thoughts on a whiteboard and looking at them “over there”, literally from a distance.

I recommend trying it if you have something on your mind. It feels like you’re stepping outside yourself for a moment, surveying your thoughts from afar and seeing the bigger picture. It’s almost like you’re viewing someone else’s problem and can ponder it objectively. Epictetus had good advice for viewing your own problems objectively – consider how you would react if a friend had the same problem:

“When a friend breaks a glass, we are quick to say, ‘Oh, bad luck.’ It’s only reasonable then, that when a glass of your own breaks, you accept it in the same patient spirit.”

In writing for myself, I am writing to myself. I am constantly reminding myself not to let my judgements hamper me, not to be ruled by fear. No one else can understand my own need for these reminders as well as I can. I can’t reasonably expect anyone else to care as much about me as I do myself, even those close to me. Everyone has their own self to worry about first and foremost, that is natural and normal.

But that doesn’t mean writing for oneself won’t help people in a similar frame of mind. Some of the best leadership is indirect. Leadership by example, when people don’t feel like they’re being preached to by someone who blindly believes they know better, is impactful yet unimposing. By simply working on your own improvement you can inspire other people to do the same. From your example they can take what’s relevant to themselves and discard what isn’t. I believe this is what Epictetus meant when he said, “Don’t explain your philosophy, embody it.” Show, don’t tell.

My favourite Stoic example of this principle in practice is Cato the Younger. As a military leader he practised hardship to prepare himself (only himself) for tough times, but this resonated with his subordinates and they learned by his example. Rob Goodman and Jimmy Soni summarise the respect Cato earned from his men in their book Rome’s Last Citizen: “For a senator-in-waiting, Cato’s unpretentious willingness to share hardship was mildly shocking. It won his men’s affection in a way that no Stoic lecture could have.”

Strengthen the individual. Start with yourself.

If I can be a little more direct than Cato for just a moment – if you don’t currently write, start. If you do, continue. Whether you’re putting it online or keeping it in a drawer, typing it up or scribbling it down, write about what matters to you. Put everything through your filter and clean it up. Make coffee for someone.

Thank you for reading this. I wrote it for myself. I hope it helps you.

Adapting Your Thinking with an Ancient Stoic Practice