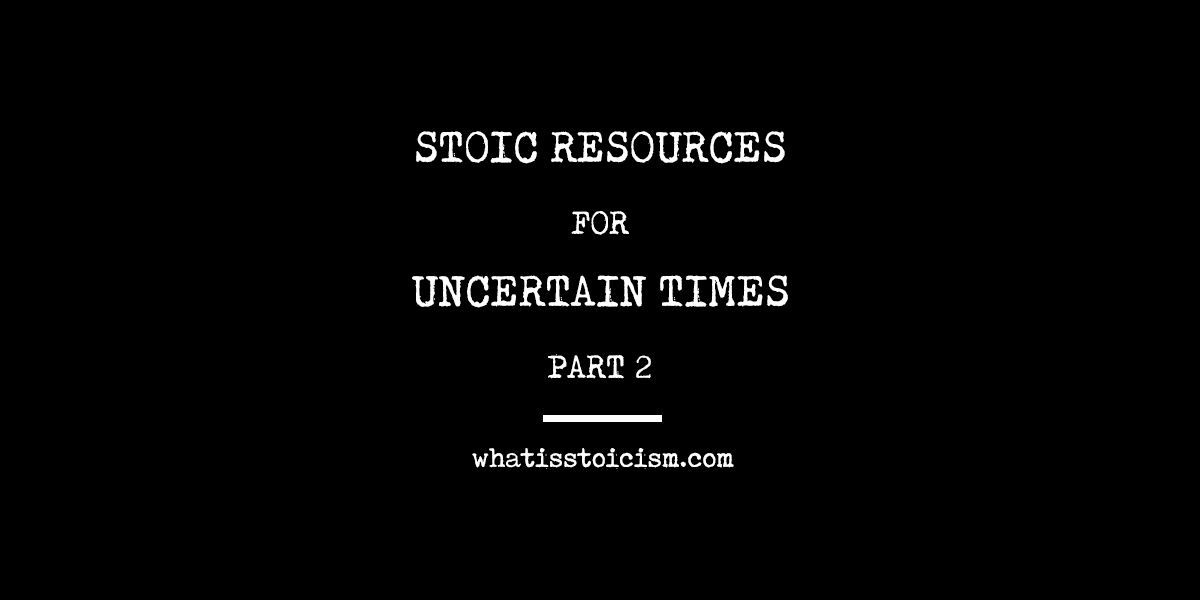 In March 2020, I published a post entitled Stoic Resources For Uncertain Times which focused on how the Stoic virtues could be applied in the midst of a pandemic.

In June 2020, following the death of George Floyd and the timely worldwide calls for action against racism, things still feel uncertain. We’re uncertain about the outcome of protests. We’re uncertain whether lasting positive change will be affected. We’re uncertain, but optimistic and motivated.

To do our part, it’s important that we start by seeking to better educate ourselves about the struggles of others even if it feels like they’re far removed from our own lives. It’s the Stoic thing to do:

“It makes no difference whether a person lives here or there, provided that, wherever he lives, he lives as a citizen of the world.”

In a similar format to the post from March, I’d like to share some of the useful resources I’ve found for these uncertain times (and beyond) as they relate to the Stoic virtues.

(Definitions courtesy of this article by Donald Robertson).

Stoic Definition: The knowledge of what is good and bad; the disposition by which we judge what is to be done and what is not to be done.

How To Apply Wisdom Now:

Take the time to listen. Focus on listening carefully and getting educated to understand the issues that need to be fixed.

“The reason why we have two ears and only one mouth is that we may listen the more and talk the less.”

Share your own words when you’ve heard many more. Here are some examples of people who have done the same:

Stoic Definition: Moderation of the soul concerning the desires and pleasures that normally occur in it; harmony and good discipline in the soul in respect of normal pleasures and pains.

“A setback has often cleared the way for greater prosperity. Many things have fallen only to rise to more exalted heights.”

How To Apply Self-Discipline Now:

Stoic Definition: The state of the soul which is unmoved by fear; self-restraint in the soul about what is fearful and terrible; boldness in obedience to wisdom; being intrepid in the face of death; force of fortitude in respect of virtue.

“Just as nature takes every obstacle, every impediment, and works around it — turns it to its purposes, incorporates it into itself — so, too, a rational being can turn each setback into raw material and use it to achieve its goal.”

How To Apply Courage Now:

Stoic Definition: The state that distributes to each person according to what is deserved; the state on account of which its possessor chooses what appears to him to be just.

How To Apply Justice Now:

This is perhaps the key virtue for these times. Here’s what the Stoics said:

Exercise: Write Your Meditations Book One