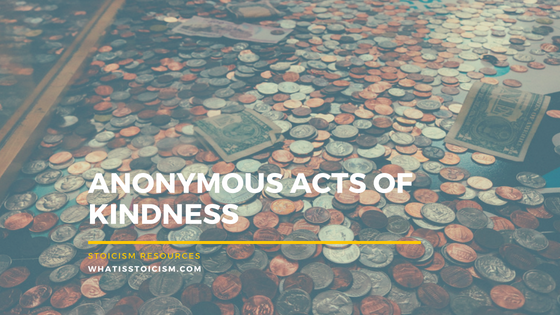 When was the last time you helped someone without them knowing it was you?

Maybe you made an anonymous donation to a JustGiving campaign or returned some lost property and didn’t leave your name. If something similar does come to mind, you should now be feeling that same little buzz you got when you did it.

That feeling may be evidence that there’s a more sustained satisfaction from being an anonymous benefactor as opposed to the instant gratification gained from being known.

It’s not always possible to do a good deed anonymously, especially if it’s time-critical. But if you’re seeking fame from your benevolent acts, you may lose sight of the important part – helping someone else, which the Stoics believed was the very purpose of a human being.

But as long as good deeds are being done, why does the underlying reason matter?

In most cases it probably doesn’t, assuming the reason isn’t something illegal. People in need of help are getting help. Problems can arise, however, when it becomes commonly known that someone has benefited from their  charitable act. There’s even a term for it – “tainted altruism”.

When Jay-Z was working on material for his Magna Carta Holy Grail album, he shared his concerns about helping others. He was unsure about his own motivations for being charitable. He wondered if he was helping others just to make himself feel good. And he wondered whether the money he was providing was ultimately being spent in nefarious ways.

Champagne problems, perhaps. More money, more problems, certainly. But Jay-Z’s dilemma of people being aware he has money and knowing who to help is undeniably a difficult one.

One solution that may satisfy his conscience, and there’s every chance he already does this, is giving anonymously. He could even start his own Pineapple Fund, which was set up by an anonymous individual in December 2017 and gave away $55 million to various charities. With an estimated net worth of $810 million, Jay-Z could easily be playing in that arena.

On the anonymous nature of the Pineapple Fund, the website says this:

“Why are you remaining anonymous?
Publicity has never been the point of this fund.”

I wonder if the founder still feels the little buzz of sustained satisfaction today?

Whether or not he has committed any anonymous acts of kindness himself, Jay-Z has at least been inspired by them. On the Magna Carta Holy Grail album track Nickels and Dimes, he says:

“The purest form of giving is anonymous to anonymous
We gon’ make it there, I promise this”

Explaining the line, he has said, “The person on the receiving end doesn’t have to feel… some kind of obligation to the giver and the person giving isn’t doing it with an ulterior motive.”

This may have been the real point of remaining anonymous for the person behind the Pineapple Fund. Finding themselves with more money than they could ever hope to spend due to an early Bitcoin investment, they were able to help many others without needing attention themselves.

There was plenty of media coverage at the time of the donations but there can be no resulting fame when no-one knows who was behind it, and the beneficiaries need not feel indebted to anyone.

“A horse at the end of the race…A dog when the hunt is over…A bee with its honey stored…And a human being after helping others. They don’t make a fuss about it. They just go on to something else, as the vine looks forward to bearing fruit again in season.”

Not many of us can afford to donate $55 million, but the list of things can we do instead is endless. From the anonymous couple who have been paying strangers’ restaurant bills for years, to the person simply covering the price of a vending machine snack, it doesn’t need to cost a fortune.

It doesn’t even need to involve money. Just empathising with someone else’s situation can be enough to make a bad day a little better for them and create a lasting memory for you. I hope I can remember to ask myself “What would I want someone else to do if that was me?” as much as possible.

Here’s a couple of simple examples –

Why not try it out today? Give yourself a buzz.