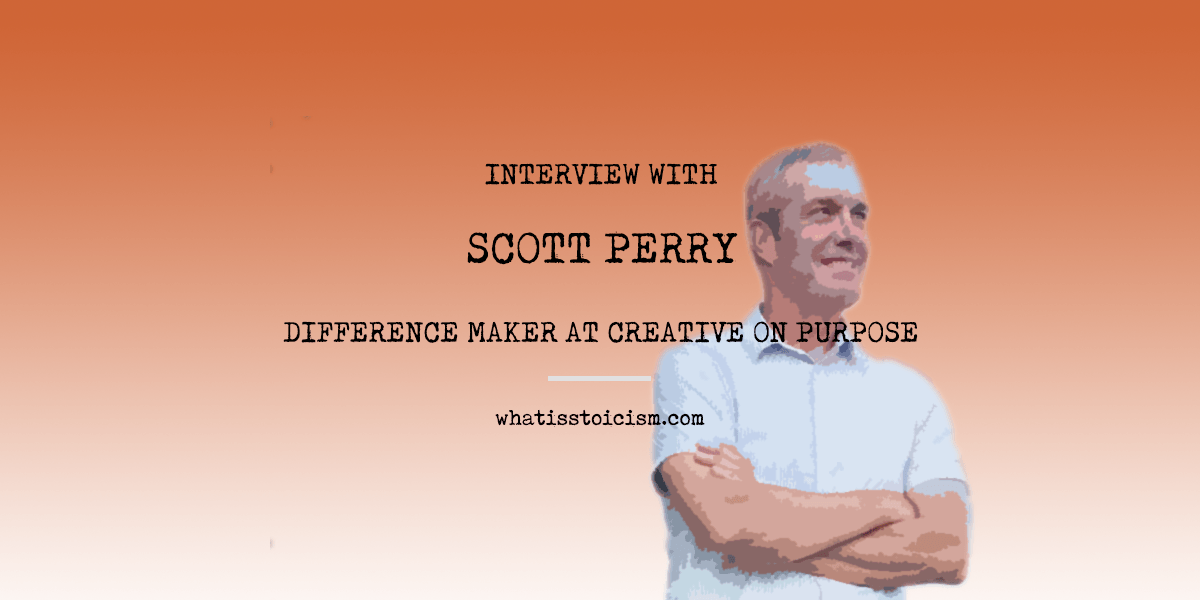 Here’s a clip from Scott’s interview with Derek Sivers for his Creative on Purpose podcast, you can check out the full episode here:

It was great to be able interview Scott recently, and without further ado here are his answers!

How long have you been interested in Stoicism and how has it changed your life in that time?

I was introduced to Marcus Aurelius’ Meditations in the 7th grade (1976 or so). It’s been a constant companion ever since and has informed and inspired everything I’ve done.

How does Stoicism guide your work as Difference Maker at Creative on Purpose?

Creative on Purpose began as a project called The Stoic Guitarist and a bit later, The Stoic Creative. In addition to Stoicism’s assertion that we are inherently social creatures capable of reason, I believe creativity is also a defining human endeavor.

I love your practice of going for a daily run near a cemetery (mentioned in podcast episode How Stoicism Can Help You Endeavor Better) – can you explain the significance of that location?

I used to run through town to the cemetery and back home. But after a few close calls with traffic, I decided that if I didn’t want to prematurely end up in the cemetery, it was safer to drive there for my run. It’s the highest point in town and offers spectacular views of the Blue Ridge Mountains. My daily cemetery run connects me with nature and is a reminder that my time here is finite. It enhances my equanimity and inspires me to not waste time.

Do you have any other Stoic practices in your daily routine?

I begin my day with a gratitude practice and end it with a reflection of the lessons of the day. I reference Stoic quotes and maxims throughout my day as well.

In your podcast interview with Derek Sivers you talked about how you set goals but aren’t attached to the outcome. Do you have any advice for those who find it difficult to get their rewards from effort as opposed to achievement?

Choosing to focus on what is within your control, your perception and effort, instead of what is not, what happens next, is a choice. It’s simple; but simple is rarely easy. I keep Stoic reminders close at hand and top of mind such as Epictetus’, “Happiness and freedom begin with a clear understanding of one principle. Some things are within our control, and some things are not.” Another is, “Don’t seek for everything to happen as you wish it would, but rather wish that everything happens as it actually will—then your life will flow well.”My favorite quote is Marcus’, “Love the humble art you have learned and take rest in it.”

You have a “less is more” sign on your bookshelf – why is that an important notion for you and in what ways do you implement it?

My default setting is “more.” My family lovingly calls me “Mr. Over-do-it-man.” We all have things that we need to work on and practicing essentialism is one of my primary challenges. I spend a lot of time on video calls, so I see that sign frequently and it reminds me to focus on what’s important and to create open space in my life and work.

You’ve authored The Creative on Purpose Handbook, Endeavor, and The Stoic Creative Handbook. Do you have plans to write more Stoicism-inspired books?

I’m currently working on a handbook titled “Stepping Into Possibility” which, like all my other work, is deeply informed by Stoicism.

I appreciate the work of many in the Modern Stoicism movement, but I tend to stick with the primary texts of the Roman Stoics. I reread and refer to Marcus, Epictetus, and Seneca daily. That said, I deeply appreciate Donald Robertson’s “How to Think Like a Roman Emperor” and “Stoicism and the Art of Happiness.” I also admire the scholarship and contributions of Christopher Gill.

Thanks for taking the time to answer these questions, Scott. A slightly open-ended question to finish off – in terms of what the philosophy means to you, what is Stoicism?