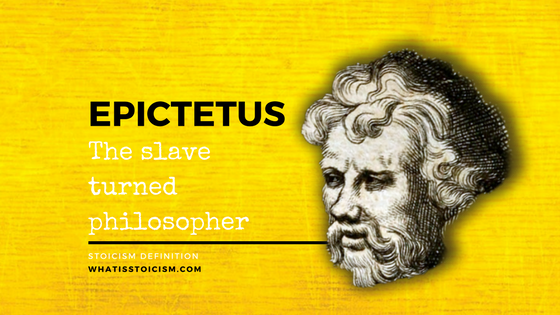 Now, it’s no secret that steadfast character can be born out of strife and the philosopher, Epictetus, who lived to the ripe old age of 80, was no stranger to strife. He was born into slavery in A.D. 55, in what is now known as Pamukkale, Turkey but was then Phrygia’s Hierapolis. Epictetus spent his days and nights in the service of Epaphroditus, a man of both wealth and stature, with whom he came to Rome and who also happened to become secretary to Emperor Nero.

There are conflicting stories regarding the manner in which he was crippled but we know that he was. Certain histories hold that the disability was the result of rheumatism and others that his leg was broken during a deliberate twisting by a fiendish master. The truth is unknown but even if his master was cruel, at least Epaphroditus allowed Epictetus to pursue his passion for Stoic philosophy. This was done by placing him under the tutelage of Musonius Rufus, an eminent instructor who’s influence certainly added credibility to the voice of this slave…when finally he gained his freedom.

The exact details are lost but it’s understood that Epictetus gained his freedom as a teenager, shortly after the death of Nero. His mind had been freed long before that though and it was those early studies that shaped the rest of his life. For 25 years, as a free man, he shared his passion in Rome, until, that is, Nero’s successor Domitian banished his ilk from the capital. Domitian was known as a rather fearsome character and the philosophers of the day were certainly fortunate to get away with their lives.

By now, Epictetus had built up enough reputation to truly make a go of things when he arrived in Nicopolis, Rome, which would be his new home. Founding and maintaining a philosophical school that was the haunt of many a proud student, it is said that Epictetus had a silver tongue, driven by a powerful vitality of mind. It was a combination which not only resulted in men of great stature seeking his council but also in a body of students who were devoted to preserving his method for posterity. Since Epictetus was more of a talker than a writer, this worked in our favour.

One of these students was Arrian, whose ‘Discourses’ were allegedly written, verbatim, from Epictetus’ lectures, although we suspect that a good deal of poetic embellishing was done since, surely, no one can be THAT silver tongued. Thankfully, Arrian’s transcriptions give us a great deal to go by and are detailed enough to pass for the real thing. The 4 (of an original 8) volumes of ‘Discourses’ that have survived, cover a broad spectrum of topics, as taught in his everyday classes but it’s Arrian’s ‘Handbook’ or ‘Enchiridion,’ which extracts the overriding themes that exemplify Epictetus’ ethical teachings.

Aside from the asceticism that is the wont of great Stoics, Epictetus maintained that self-knowledge is assuredly the foundation of all philosophy. He held true to the teachings of founding Stoics such as Zeno and Chrysippus but refined and further sublimated their understanding with his own definitive talent. To sum up the scope of his discourses, a quote from the text itself:

“There are three areas of study, in which a person who is going to be good and noble must be trained. That concerning desires and aversions, so that he may never fail to get what he desires nor fall into what he would avoid. That concerning the impulse to act and not to act, and, in general, appropriate behaviour; so that he may act in an orderly manner and after due consideration, and not carelessly. The third is concerned with freedom from deception and hasty judgement, and, in general, whatever is connected with assent.”

The dichotomy of control

Furthermore, he separates matters into two contrasting fields. That field which is within our control and that field which is not. Put it this way, what is internal is ours to command but when external factors, other people and structures come into play, it’s out of our hands:

Like Zeno, he taught a stilling of fear and pain through desensitisation and acceptance:

“Let death and exile, and all other things which appear terrible, be daily before your eyes, but death chiefly; and you will never entertain any abject thought, nor too eagerly covet anything.”

He took that acceptance to new heights, however, evolving it to the point of active will:

“Demand not that events should happen as you wish; but wish them to happen as they do happen, and your life will be serene.”

These concepts are, for me, the ones which make Stoicism such a poignant science to this day, ignorance is not bliss but enlightenment is no simple achievement. What makes these concepts ever more credible are the fact that, as mentioned, Epictetus was no stranger to tribulation. He overcame the daily struggle of disability to instruct, uplift and empower even men whose stars were far better aligned than his. He did this by dedication to serenity, that is: correcting the things we can control and accepting the things we can’t. While many of the notable Stoics held positions of rank and power from cradle to grave, here was one who rose in stature from a born slave to a legend.

“Will you be angry and discontented with the ordinances of Zeus, which he, with the Fates who spun in his presence the thread of your destiny at the time of your birth, ordained and appointed?”

Epictetus practised what he preached, that’s how he achieved so much and that is why he did and does so well at convincing others to do the same. He knew that freedom could be gained by living virtuously, in spite of circumstances. Still, one can only wonder what pearls would have been lost, had he not gained his freedom but instead lived out his years as a student of philosophy only. He lived a long and ascetic life, with meagre possessions and mostly in solitude, until, late in life, he adopted a child who was in need of care and also took the company of a lady friend (or wife, it is unknown) who helped to raise the child. He died of old age in 135 A.D.