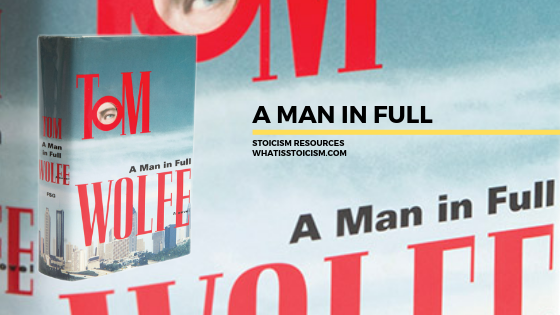 “I’m older than mosta you and I can tell you that the only real possession you’ll ever have is your character, that and your ‘scheme of life,’ you might say. The Manager has given every person a spark from His own divinity, and no one can take that away from you, not even the Manager himself, and from that spark comes your character. Everything else is temporary and worthless in the long run, including your body. What is the human body? It’s a clever piece a crockery containing a quart a blood. And it’s not even yours! One day you’re gonna have to give it back! And where are your possessions then? They’re gonna be picked over by one bunch a buzzards or another. What man’s ever been remembered as great because of the possessions he devoted his life to ’cumulating? I can’t think of any. So why don’t we pay more attention to the one precious thing we possess, the spark the Manager has placed in our souls?”

The above passage is part of a speech given at a press conference by Charlie Croker, the main character in Tom Wolfe’s excellent novel A Man In Full. Croker is a real estate tycoon worth millions. A man who has indulged in every luxury available to him, he owns, among many other things, his own private jet, a mansion in an affluent area of Atlanta, and his own plantation, all of which require the employment of countless servants to maintain. Despite initially presenting the image of the wildly successful businessman, larger-than-life and revelling in his wealth and power, it soon becomes clear that an ill-conceived and egotistical construction project has plunged Croker into hundreds-of-millions-worth of debt with PlannersBanc.

When the bank begin trying to seize Croker’s assets, it’s evident that the man from humble beginnings in Baker County, Georgia has become so accustomed to his life of excess, and so protective of his high standing in society, that he can’t bear to part with the many possessions he has accumulated. He even attempts to sabotage the commandeering of his G5 jet, despite it’s handover being able to put a decent dent in his financial deficit.

Croker’s initial combative reaction to the bank’s debt collecting procedures turns to despair and depression as he comes to terms with his fate. He contemplates the disaster of losing everything but also begins to ask himself why he has spent so much money so unnecessarily over the years. Extravagant decorations and furnishings in his opulent mansion in Buckhead, a fleet of expensive vehicles, a menagerie of animals and the associated staff to keep them alive – the deeper into crisis Croker plunges, the more he questions his need to own so much.

“Slumped over like a dead man, he opened his eyes and let them pan around the room. The Great Man’s Library … by the celebrated Mr. Ronald Vine of New York … all the carved wood, the $250-a-yard fabrics, the custom-made carpet from What-the-hell-was-the-name-of-that-place-in-New-York … He was precisely where he had dreamed of being as a young man: living in a mansion in Buckhead, the master builder of metro Atlanta, creator of a gleaming tower named after himself, a man whose footsteps made the halls of the mighty vibrate … and how hollow it all was! It meant only that when your egomania and the defects in your character finally plunged you into ruin, your collapse would provoke more and tastier gloating.”

With his situation insurmountable, Croker is unexpectedly offered a way out. He is approached by a lawyer and asked to speak out in support of a Georgia Tech football star who has been accused of rape. As a former Georgia Tech football star himself, and a big name in Atlanta, Croker’s endorsement would have great influence on public opinion and potentially defuse a scandal that the university, and even the Mayor of Atlanta, does not want to face. In return for his support, the lawyer promises that the necessary political strings will be pulled to immediately stop the bank pursuing Croker’s assets. Despite feeling no desire to support the football player, having no notion of his guilt or innocence, Croker sees no other way out of his own predicament and agrees to the deal.

Owing to an old football injury, Croker, now 60-years-old, undergoes a knee operation shortly after his shady deal is made and gets to know a young man named Conrad Hensley, who is employed as a carer to help with his recovery. Hensley introduces Croker to Stoicism with the help of The Stoics, a book which helped Hensley survive a short but brutal stint in prison as he adopted the teachings of Epictetus described within.

The more Charlie Croker learns about the likes of Epictetus and Agrippinus, the more clarity he seems to gain in his thinking. Fretting over his financial predicament and his commitment to endorse a character that he normally wouldn’t even consider endorsing, he quizzes Hensley on what advice Epictetus would give to someone faced with similar challenges.

What does Epictetus have to say about bankruptcy?—or is that something too mundane for a philosopher to think about?”

“Not too mundane for Epictetus, Mr. Croker. One place he says, ‘You are all nervous and you can’t sleep at night for fear you’re going to run out of money. You say, “How will I even get enough to eat?” But what you are really afraid of is not starvation but the prospect of not having a cook or somebody to wait on you at the dinner table or somebody to take care of your clothes and your shoes and the laundry and make up the beds and clean up the house. In other words, you’re afraid you may no longer be able to lead the life of an invalid.’”

Intrigued, but not yet convinced, Croker presses Hensley on the real-world application of a Stoic mindset:

The boy said, “Many of Epictetus’ disciples asked him that exact same thing, and you know what he told them?”

“Have you ever seen an old beggar?” The kid’s eyes were boring right into him.

“See? They’ve gotten by,” said the boy. “They’ve managed to get food to eat, 365 days a year, probably. They’re not starving. What makes you think they can all find food, and you wouldn’t be able to?”

“What kinda consolation is that supposed to be? I’d rather die than go around with a cup in my hand.”

The boy smiled, and his eyes brightened. “Epictetus talks about exactly that, Mr. Croker. He says, ‘You’re not afraid of starving, you’re afraid of losing face. He says, ‘You don’t have to have some high position before you can be a great man. One of the great Stoic philosophers, Cleanthes, hauled water to make a living. He was a day laborer, Mr. Croker. But nobody thought of him as someone who didn’t have a respectable job. Why? Because he radiated the power of the spark of Zeus.”

With his crash-course in Stoic philosophy complete, the day comes when Croker must follow through on his pledge to speak at a press conference in support of Fareek Fanon, the accused Georgia Tech footballer. Privy to the deal that has been made beforehand, the Mayor of Atlanta and Fanon’s lawyer confidently watch on, expecting Croker to put an end to a scandal that could tear the city apart.

Croker stuns them, however, veering off-script to project his new Stoic attitude. He says the bank can have at his possessions, it’s all theirs to do with as they please:

“But you say, ‘Be serious, Croker. With no money, no possessions, how am I supposed to eat? Where can I stay? Well—have you ever seen an old beggar? Of course you have. We’ve all seen’em. How’d they get to be so old? They all ate somehow, 365 days a year, most likely, and they all stayed somewhere, too. But you say, ‘I’d rather die than sit down beside the road with a Dixie cup, begging.’ Do you realize what you’re really saying? You’re saying, ‘It ain’t what I’m gonna eat or where I’m gonna stay I’m worrying about, it’s saving face, it’s what everybody in Buckhead’s gon’ think about me, that’s what I’m worrying about …”

He refuses to speak in favour of Fareek Fanon. He goes overboard and preaches the word of Epictetus until the Mayor forcibly takes control of the press conference and shuts him down. The crowd at the press conference think he has gone mad with his Stoic-inspired rambling. Despite the millions he has lost, the prestige that has evaporated, the anger of those with whom he made a deal, Charlie Croker finally feels free.

Despite the shouts, which ricocheted off the marble walls of the rotunda and doubled, tripled in volume, Charlie felt … tranquil. That was exactly what he had found: tranquillity. That was exactly what he was blessed with: a mind in accord with nature. He was not yet a good speaker, but that would come with time, for as Epictetus had said, “Like the bull, the man of noble nature does not become noble all of a sudden; he must train through the winter and make ready.” He felt tranquil and … light. His feet only just barely touched the marble and the earth below. He felt as if he could run a hundred yards just the way he had forty years ago. Wouldn’t that amaze them all! He had shed all the shabby baggage of this life. He had become a vessel of the Divine.

A Man In Full is of course a fictional tale, but Charlie Croker’s dilemma is all too real. It’s easy to become a slave to more – more money, more possessions, more recognition. Becoming a slave to such things means you’ll do anything to keep them, even if it means abandoning your principles. Like Charlie Croker, we can look to the Stoics for guidance. Here is a short selection of Stoic quotes on the topics of wealth and luxury:

Tags: A Man In Full, Epictetus

Interview With Daniel Vargas, Creator Of The Stoic Sage