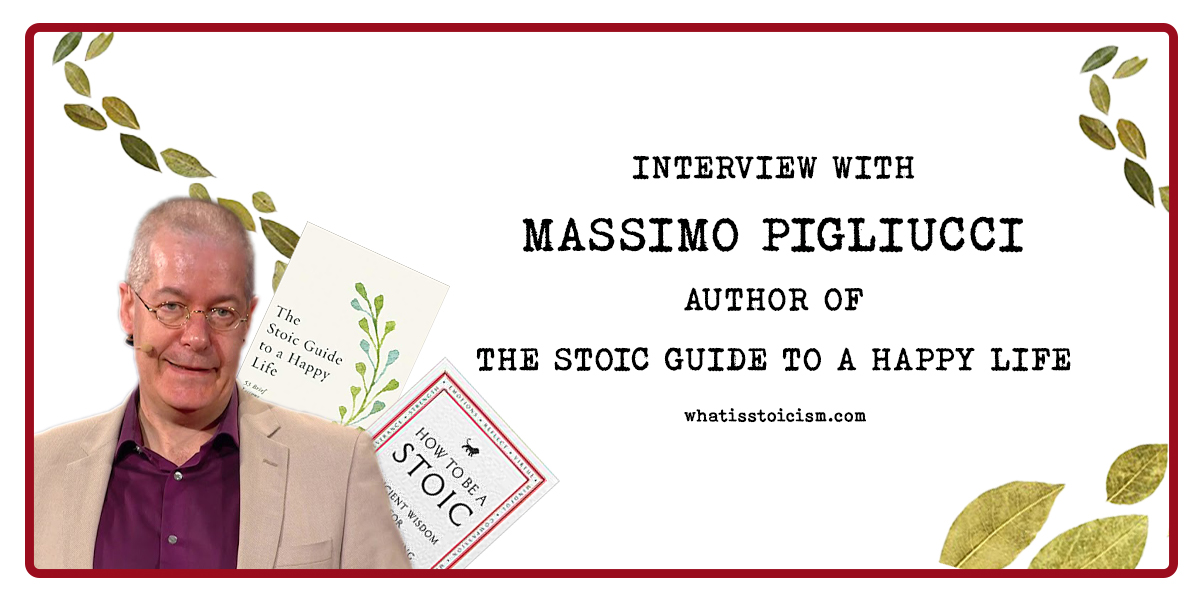 Massimo Pigliucci is Professor of Philosophy at the City College of New York and a well-known student of Stoicism.

He is also the author of several books, including How to Be a Stoic, A Handbook for New Stoics and The Stoic Guide to a Happy Life.

It was great to be able to interview Massimo recently. His answers, which you can find below, give interesting insight on the modern application of Stoicism and include useful recommendations for both reading and practicing the philosophy.

You can find Massimo online here:

Your latest book, The Stoic Guide to a Happy Life, is an updating of Stoicism and an excellent handbook for the modern day.
Do you feel a responsibility to help Stoicism evolve and how important is it that it continues to do so?

I’m not sure I would talk about “responsibility,” but yes I do think it is important to continue to update Stoicism, just as other philosophies of life have evolved through time. For instance, nobody is a Buddhist the way people were two and a half millennia ago.

Philosophies of life are living, dynamic sets of ideas, and they need to be in synch with the times in order to be useful. The Stoics themselves said so:

“Will I not walk in the footsteps of my predecessors? I will indeed use the ancient road — but if I find another route that is more direct and has fewer ups and downs, I will stake out that one. Those who advanced these doctrines before us are not our masters but our guides. The truth lies open to all; it has not yet been taken over. Much is left also for those yet to come.”

XXXIII. On the Futility of Learning Maxims, 11

Of course the obvious question that comes up is: up to what point is it still Stoicism? The answer is complex, but basically hinges on two considerations, in my opinion.

First, there is no sharp boundary separating Stoicism from non-Stoicism, because philosophies of life are complex human artifacts, and Wittgenstein taught us that it is foolish to seek precise definitions for most human concepts.

Second, I think there are some elements of Stoicism that cannot be eliminated without the result ending up looking quite different from the philosophy of the ancient Greco-Romans. Which, again, is true of other philosophies and religions: if you reject the Ten Commandments you are going to have a hard time convincing people that you are a Christian.

Similarly, if you don’t think that virtue — meaning prosocial behavior guided by reason — is fundamental in life, then you are veering pretty far from Stoicism.

In that spirit of updating for the modern day, are there any high-profile people you see today displaying Stoic traits? (But don’t necessarily consider themselves a Stoic)

Plenty. Susan Fowler, for instance, the woman that courageously spoke out about the culture of sexual harassment at Uber. Indeed, she does consider herself a Stoic, and wrote a wonderful essay on the books that influenced her life. Three of the top four are Stoic texts.

Another role model along Stoic lines was Nelson Mandela, who overcame his understandable anger at the Apartheid regime in South Africa to try a new — successful, as it turned out — path of reaching out, understanding, and cooperation. Mandela, incidentally, while he did not consider himself a Stoic, was strongly influenced by Marcus Aurelius’ Meditations, which one of his fellow inmates managed to smuggle into the prison at some point.

Similarly, are there any modern resources you recommend people look to after becoming familiar with the ancient texts?

There are excellent translations and commentaries on the ancient texts that are accessible to a general public. Here are my favorite so far:

You have written previously about this passage being your introduction to Epictetus:
“I have to die. If it is now, well then I die now; if later, then now I will take my lunch, since the hour for lunch has arrived—and dying I will tend to later.”
What resonated with you about these words and what application do they have to the lives of students of Stoicism?

Epictetus spoke those words after telling his students about some of the Stoic senators and philosophers known collectively as the “Stoic opposition,” who bravely opposed the tyranny of the emperors Nero, Vespasian, and Domitian. So this is one of the passages in the Discourses where it is very clear that Stoics have a duty to get involved in social and political affairs, to do their best to improve the human cosmopolis.

But the passage is also an example of the no-nonsense attitude that Epictetus brought to his philosophy, not to mention his sense of humor, bordering on sarcasm. Do we have to die? Surely. As philosophers, do we need to prepare ourselves for death, what Seneca calls the ultimate test of our character? Definitely. But if it doesn’t look like right now this is an imminent problem, then we have the rest of life to attend to. Let us stay focused on the here and now, the only occasion we have to exercise our agency.

How do you determine when it is necessary to call out misconceptions about Stoicism and when it is better to “have no opinion” as Marcus would say?
(Case in point, Mary Beard’s recent NY Times comment)

Oh I always have an opinion… the real question is, as you say, when is it worth sharing it in public. My criterion is that if someone highly visible and/or highly respected says something seriously incorrect about Stoicism then it may be a good contribution to the cosmopolis to point it out. Respectfully, but firmly.

Then again, I also believe that the philosophy stands or falls on its own, so I devote most of my time to positive teachings, not to rebuttal of misconceptions.

It’s hard to overstate the importance of practice when it comes to adopting a Stoic philosophy of life.
What advice would you give those who are just starting their Stoic journey or those who are struggling to remain on the Stoic path?

At the cost of coming across as self-serving, it is worth picking up A Handbook for New Stoics, which I co-wrote with my friend Greg Lopez. It truly is, as far as I can tell, a unique book in the Stoic genre. It is focused on exercises (52 of them), which people can try out in sequence or sample depending on their specific problems and preferences. The book comes with a modicum of theory to set the background, but it is largely about practice. And the exercises, though inspired by the ancient texts, are updated according to findings in cognitive science.

The other thing I suggest is to get together with others. Nothing helps more than a buddy system, or a community of like minded practitioners. This can be done online or in person. If you wish to join a local Stoa, or start a new one, please visit the Stoic Fellowship and register on their site.

Thanks for taking the time to answer these questions, Massimo. Finally, the question I ask all interview guests – in terms of what the philosophy means to you, What is Stoicism?

It’s a framework for ethical self-improvement and for living a human life worth living. It’s basic tenet is that we should live according to (human) nature, meaning using our ability to reason in order to improve social living.