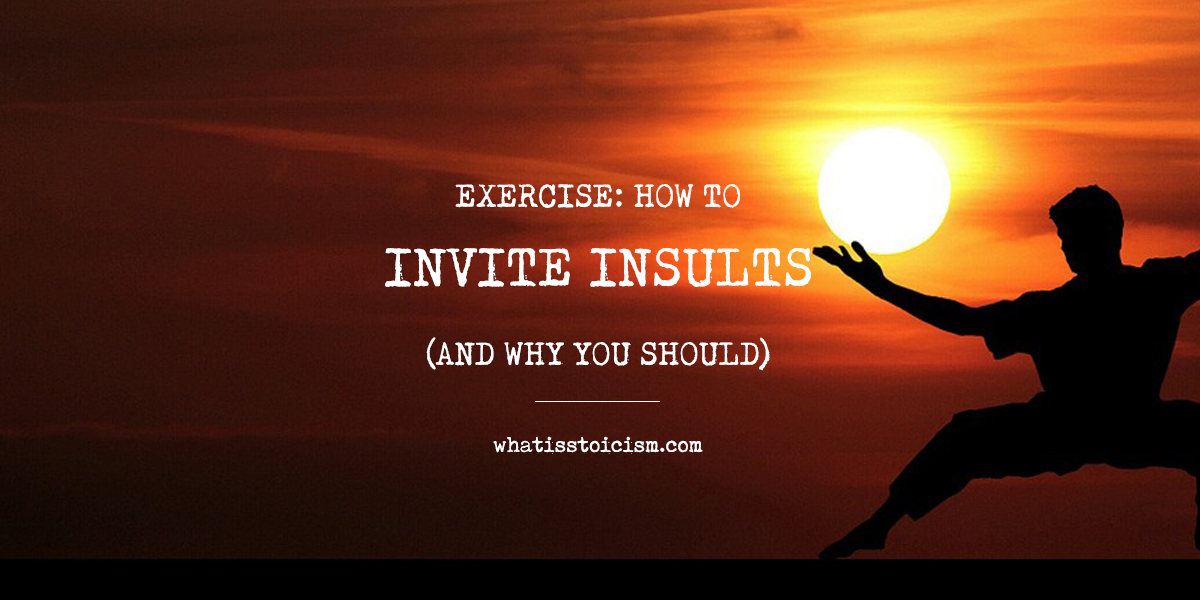 No one enjoys the discomfort of ridicule. To be derided by someone you don’t know can be painful. When it’s someone you do know it can hurt even more. Ridicule is sent with different intentions by the aggressor – it can range from playful to sinister – but the intention doesn’t always produce a proportionate response in the person being ridiculed.

Even something as simple as “Hey, nice haircut!” can be taken in different ways. Depending on your state of mind at that exact moment you’ll either happily think “I’m looking good today!”, or you’ll think “Oh so they don’t like my hair? What an assh*le!”

Seemingly harmless jests (or even intended compliments) can have the same impact as scathing put-downs depending on how they’re received.

But what if that same impact didn’t mean equally bad? What if it meant equanimity in both situations?

Being immune to ridicule and insults might seem impossible to you, especially if you’re someone who, like me, is prone to over-thinking. It might seem fanciful. You might think, if only there was a miracle product for this, I’d buy it; if there was a magic potion, I’d try it.

Cato the Younger didn’t have a potion, but he was able to take steps to immunize himself against the impact of insult. His formula was simple – actively invite insults by going against common customs.

For example, at a time when purple was most in fashion, Cato wore black. And after breakfast, he would often go outside with no shoes or tunic on. These statements would probably be ignored today, but they weren’t two thousand years ago.

Cato’s method of taking on ridicule when it could have otherwise been avoided might seem counter-intuitive, but think about it. By regularly exposing himself to funny looks and snide comments for trivial matters like fashion, he was making himself less sensitive to them. He was creating a mindset that would mean he would only feel shame over matters that actually deserved shame.

In the book The Courage to be Disliked, a philosopher counsels his young friend on the “separation of tasks.” It’s a useful notion to keep in mind here. The premise is that one can save themselves a lot of anguish by focusing on their own tasks, the things within their control, and not interfering with other people’s tasks. The following exchange between the two clarifies the concept:

YOUTH: What another person thinks of you—if they like you or dislike you—that is that person’s task, not mine. Is that what you are saying?

It’s clear that Cato stuck to his own tasks.

So, in practice, how can we be like Cato? How can we separate our own tasks from those of others and start to immunize ourselves against the impact of insult? Here are some ideas:

There’s no need to dive in at the deep end. Start small. It might seem pointless, but try wearing an outrageous t-shirt under a jacket, or socks that don’t match. You’ll feel conscious of what you’re doing even though you’re the only one who knows. You may even begin to think that other people can tell and are judging you, which is a good first step in neutralizing that feeling.

2. Wear an unfashionable item of clothing

The next step is to wear a strange garment that people can see. This time you can be sure that people are judging you, but so be it.  Tim Ferriss regularly practises this by randomly donning a cowboy hat or what he calls his “party pants”, believing it will help him deal with difficult interactions in the future.

Why stop at noticeable clothing? Catch the attention of a passer-by with a bizarre bumper sticker, a bright accessory or go all out and fancy-dress your vehicle.

The founder of Sumo Group, Noah Kagan, has several challenges he recommends to conquer fear of failure and judgement. In-keeping with our theme, the goal is again to expose ourselves to discomfort to lessen it’s impact in future.

One challenge involves sitting in the wrong seat at an event or on a plane to provoke an awkward interaction:

Another is the coffee challenge, which encourages people to ask, without any real justification, for 10% off their next purchase at a coffee shop:

Most people will make an excuse. ‘Oh, I’ve already done sales for five years.’ ‘Oh, I’m not afraid of doing that.’ ‘Oh, I don’t need a discount, I have money.’ But if you go ahead and ask for 10% off coffee, I guarantee that you will learn something about yourself that will surprise you.

Most old photos make us cringe. Why did I think those clothes looked good? What was that haircut about? If you’re active on social media, post an embarrassing photo from a few years ago. People may or may not react negatively, but after your initial embarrassment you’ll realize it’s really not a big deal.

“Remember that it is we who torment, we who make difficulties for ourselves—that is, our opinions do. What, for instance, does it mean to be insulted? Stand by a rock and insult it, and what have you accomplished? If someone responds to insult like a rock, what has the abuser gained with his invective?”

Why We Have One Tongue But Two Ears

The 21-Day Daily Stoic Freedom Challenge – Day 17 – Buy Or Make A Nice Gift For Someone Else. Send It Anonymously

The Stoicism Of Wolves