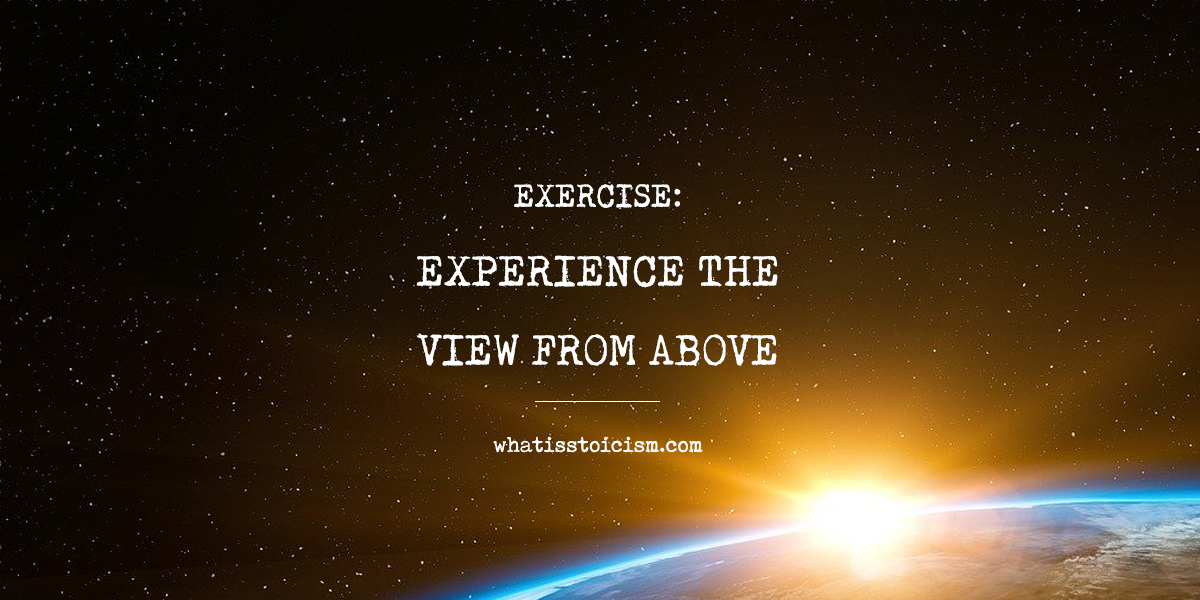 In human terms, there is no better (or higher) “view from above” than the one an astronaut experiences from outer space. As they gaze wide-eyed from their unfathomable vantage point, they see our planet as a tiny, fragile ball – a pale blue dot. For an astronaut in that moment, all of Earth’s division and conflict fades away. It’s just a small, beautiful sphere hanging in the void.

This shift in cognitive awareness has been called the overview effect and has been described in similar terms by many astronauts.

There are several striking realizations that result from this awareness shift:

The Apollo 14 astronaut, Edgar Mitchell, described the overview effect as giving him a profound sense of connectedness, a sense that all the humans, animals and systems were a part of the same thing, a synergistic whole.

“Meditate often on the interconnectedness and mutual interdependence of all things in the universe. For in a sense, all things are mutually woven together and therefore have an affinity for each other—for one thing follows after another according to their tension of movement, their sympathetic stirrings, and the unity of all substance.”

There’s a great video of Chris Hadfield, who served as commander of the International Space Station, where he talks about how the overview effect makes you appreciate the small part you have in 4 billion years of history. “When you sense that there is something so much bigger than you, that has a natural importance that dwarfs your own,” he says. “It changes how you think about things.”

Asia and Europe: distant recesses of the universe. The ocean: a drop of water. Mount Athos: a molehill. The present: a split second in eternity. Minuscule, transitory, insignificant.

Conversely to the previous point, the overview effect can also light an internal fire of significance. Mae Jemison, the first black woman to travel into space, said it got rid of her feeling of insignificance. “I was as much a part of this universe as any speck of stardust,” she said after her 1992 mission. “I had as much right to be here.”

Dwell on the beauty of life. Watch the stars, and see yourself running with them.

And so it is with Stoicism – so much of it is about changing our perspective. One of the key benefits of the philosophy is the realization that it isn’t people, things and events that upset us, but the view we take of them. We have it in our power to see problems as challenges, for example, or insults as jokes.

But with space travel still a fantasy two thousand years ago, how did the ancient Stoics change their perspective?

The View From Above

Well, unlike astronauts they didn’t have to risk decompression sickness, barotrauma, immunodeficiencies, loss of bone and muscle, loss of eyesight, orthostatic intolerance, sleep disturbances, or radiation injury. Nor did they have to undergo extensive High-G training in preparation – their togas probably wouldn’t have withstood the centrifugal force.

No, the Stoics experienced the overview effect by doing a simple mental exercise. It’s often called the View From Above Meditation these days, and it’s something we can use to change our own perspective.

Viewing the world from a different perspective – seeing it from far away, or as part of a bigger picture – can detach us from our worries and perhaps make us realize that we shouldn’t be worried by them at all.

Marcus Aurelius described the process in profound terms in his Meditations:

Look down from above on the countless gatherings and countless ceremonies, and every sort of voyage in storm and calm, and the disputes between those being born, living together, and dying. Think also of the life that was lived by others long ago, and that will be lived after you, and that is being lived now in other countries; think of how many don’t know your name at all, how many will quickly forget it, how many who – perhaps praising you now – will soon be finding fault. Realize that being remembered has no value, nor does your reputation, nor anything else at all.

The View From Above Meditation

To perform the View From Above Meditation simply set aside some time for yourself when you won’t be interrupted and follow these steps:

For a longer, guided meditation, check out this audio by Donald Robertson: