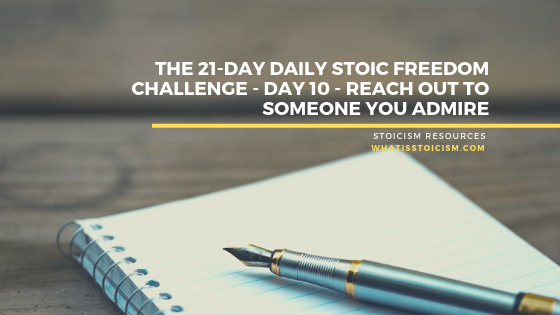 This is an account of day 10 of the 21-Day Daily Stoic Freedom Challenge, for accounts of other days please click here.

The task for day 10 of the 21-Day Daily Stoic Freedom Challenge is to reach out to someone you admire. The task echoes Seneca’s advice that having a historical model in your life, as he did with Cato, is important. As the Roman statesman writes:

The soul should have someone whom it can respect — one by whose authority it may make even its inner shrine more hallowed…One who can so revere another, will soon be himself worthy of reverence. Choose therefore a Cato…Choose a master whose life, conversation, and soul-expressing face have satisfied you… For we must indeed have someone according to whom we may regulate our characters; you can never straighten that which is crooked unless you use a ruler.

So today, your challenge is to heed Seneca’s advice—to find a master, someone worthy of your admiration and your soul’s respect, who can free you from the limitations of what you don’t know. A ruler, against which you can straighten your ambition and direct your intentions. But with one revision: your Cato must be alive.

Remember, the goal is simply to open the dialogue. Maybe you’re thinking about reaching out to your favorite entrepreneur. A great place to start is a quick note about how their work has impacted you followed by asking what books they’d recommend to someone in your position. Then, in a few weeks, you have a great topic for following up: thoughts and questions about the recommended books.

Like some of the challenges from previous days, this one prompted me to do something that I’d been putting off. Derek Sivers has been an interesting person to me for a quite a while now, and given it was his review of A Guide to the Good Life by William B. Irvine (and my subsequent reading of that book) that got me into Stoicism, it was only right that I reach out to him.

Derek is an entrepreneur known for being the founder and former president of CD Baby. He has also been a professional musician and a circus clown. It isn’t so much his career that interests me, however, but his ideas and philosophy of life, which he says is influenced by Stoicism:

I’ve always had an uncommon approach to life, mostly shaped by my ambition. But when I read a book on Stoicism I realized I wasn’t so unique. My own self-created philosophy lined up almost exactly with this ancient philosophy. So, if you want to know my approach to life, go read these book notes. Especially the biggest point about strengthening yourself for a more difficult future.

For more about Derek, check out his website, listen to his interviews with Tim Ferriss and James Altucher, or read his book, Anything You Want.

As Derek actively encourages contact via email, I composed a short note expressing my admiration; I don’t necessarily want anything from the interaction, it just feels good to know that he’ll probably read it and, hopefully, appreciate it. If he’s able to reply, even better.

In the challenge’s group Slack channel, it was nice to see that some fellow participants, like Jim, were thinking closer to home when choosing who to reach out to:

As far as today’s challenge, I’m excited to do a little hunting for contact info. There’s a couple people in the local area I’ll be reaching out to; pillars of the community as it were.

Having Few Wants And Still Offering A Lot

Exercise: Experience The View From Above