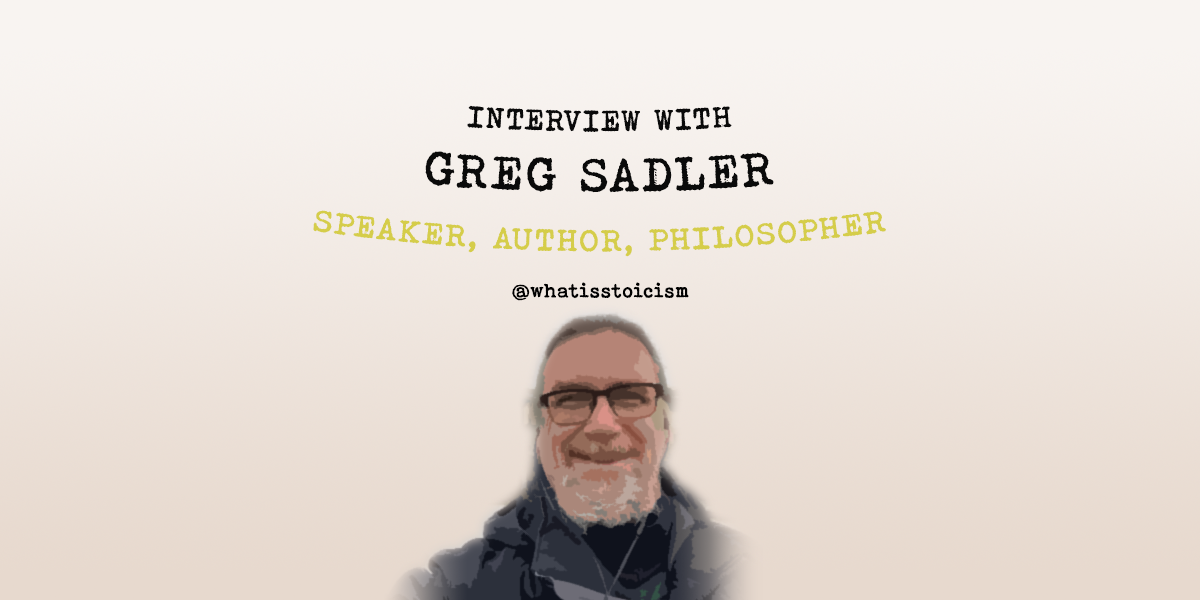 Gregory B. Sadler is the editor of Stoicism Today, the president of ReasonIO, and an adjunct professor at Milwaukee Institute of Art and Design.

He’s also a YouTuber, a podcaster, a speaker and an author.

The one thing that ties all these activities together is philosophy, which also makes him a philosopher.

You can find Greg’s work online at these locations:

It was great to be able to ask Greg some interview questions recently. Here are his answers!

From videos to podcasts to courses to articles, you produce a lot of content – what keeps you engaged with the topic of philosophy?

That’s not something I really think much about – keeping myself engaged – which may sound rather strange to some, but it’s actually a great question to think about.  I’ve been either studying, teaching, or applying philosophy full time for 30 years now, more than half of my life.  So even if my profession wasn’t tied up with philosophy but some other field or discipline, you’d expect that something like long habituation and an inertia of moving forward would keep me involved in it.  When you make it philosophy, an area of study that is pretty much inexhaustible, it kind of keeps drawing you back in.

It’s somewhat similar with the content production. I enjoy doing it, for a variety of reasons.  It turns out that there’s a lot of topics I can discuss more or less competently, and people do seem to like the videos, podcast episodes, and writings that I put out there.  Some of the materials I develop are specifically intended for students enrolled in my academic classes, but they prove helpful for other students, lifelong learners, and even other professors as well.

In the cases of some philosophical texts, thinkers, and topics, I produce content on them because nobody else is doing so, or at least not in the manners that I am.  The Half Hour Hegel series is a prime example of that. I’m not a committed Hegelian by conviction, and I’m definitely not the best person available to lecture on Hegel’s Phenomenology of Spirit.  But I am the person who was willing to do the work to create those commentary videos (over 280 at this point).

For those who started with the original texts of Marcus Aurelius, Seneca and Epictetus, what books/other content would you recommend they consume next to further their journey into Stoicism?

It really depends on what direction you want to go in. One way you can go is in a circle, or rather a spiral, and reread those classic texts.  It’s not as if having read through Epictetus’ Discourses once, you’ve tapped it out, let alone mastered all of the many concepts, insights, practices, and arguments it contains.  That won’t happen on the second or third reading, which will, however, prove way richer and deeper than your initial one.  It’s really only after thirty readings that you’ve fully exhausted a classic text, after all.  Hahahah!  Nope. Not even then – that’s part of what makes texts like that “classics”!

You could also deepen your study of Stoicism by reading some of the other important works and authors that, even if they are not by Stoics, are invaluable for learning what the Stoics actually thought, taught, and did.  One of those authors is Cicero.  Given its title, it’s a proverbial “no-brainer” that you’d want to read his short Stoic Paradoxes.  But if you really want to learn more about Stoicism, you’d also want to check out his On Duties, On The Ends, On Fate, Tusculan Meditations, On The Nature of the Gods, and maybe even On Divination.  Cicero got to study with, and even fight in a civil war alongside with, some of the greatest representatives of the Stoic school in his time.

For systematic overviews of Stoic philosophy, you want to go to Diogenes’ Laertes’ Lives of the Philosophers book 7 and to Arius Didymus’ Epitome of Stoic Ethics.  There are also two Stoic philosophers from the times of the “big three” whose works we have in a more fragmentary manner, and both of them are people you’ll get a lot out of reading.  Those are Musonius Rufus, who was Epictetus’ teacher, and Hierocles.

Another way you might go is to read some of the better, more research-intensive secondary literature that’s out there on Stoicism and on ancient philosophy more broadly. That’s not to say that you can’t get some benefit out of reading some of the more popular-oriented contemporary books on Stoicism – though you do have to sift through a good bit of jump-on-the-Stoicism-bandwagon chaff to find the kernels of wheat in that literature. You might be better off reading the works of some of the real “heavy-hitter” scholars, for instance those of my colleagues Chris Gill and John Sellars, or people like Margaret Graver (who has a simply excellent work on Stoicism and Emotion), or A.A. Long, Lawrence Becker, Julia Annas, or Pierre Hadot.

You have mentioned previously (Modern Stoicism interview) that you integrate multiple approaches in your work such as Stoic, Aristotelian and (later) Platonist.

Although everyone is different, for those mainly focused on Stoicism, which other approaches do you feel complement it well (or perhaps serve as a balance)?

As it turns out, even the classic Stoics integrated multiple approaches.  Zeno himself, the founder of the school, drew upon his own study with major representatives of three ancient Socratic schools – Crates from the Cynics, Polemo from the Platonic Academy, and Stilpo from the Megarians. Middle Stoics, like Panaetius and Posidonius drew some criticism from the more “orthodox” Stoics of their time for incorporating some insights from Platonic and Aristotelian philosophy into the framework of Stoicism.  And of course, when you read Seneca, he will adopt what might prove useful even from Epicureans.  So prudent incorporation of what is valuable from other schools is hardly something new for Stoics.

I do indeed draw upon the Aristotelian and Platonist traditions considerably. For me personally, I find there is a wealth of insights to draw upon from the Jewish Wisdom literature, from the wide range of Christian thought (already in deep engagement with philosophy and developing into multiple schools in the ancient period), from the many schools of Buddhism, from classical Chinese philosophy. . .  one could go on and on. There are also a variety of approaches originating closer to our own time that I find some value in, for instance the loose movement of interconnected thinkers and themes we call “Existentialism”.

Can you explain a little bit about what ReasonIO offers and who could benefit from your services?

ReasonIO is essentially me as a businessperson, as opposed to a professor in a traditional academic institution, or as just a private citizen.  It is the framework that allows me to put philosophy into practice, and to get paid for providing my expertise.  There are several main activities or services that I provide.

Quite a few of them involve working 1-on-1 with individual clients.  I offer tutorial sessions to assist people in their study of philosophical texts, thinkers, problems and topics. Philosophical counseling is another service that I provide to people who want to work through issues using resources from philosophy. I also do a good bit of consulting work of various sorts and academic coaching.

I also engage in quite a few activities making philosophy accessible and applicable for much wider audiences. Pre-covid, that included a lot of public speaking and some online events.  Now of course – and until we get a handle on this deadly pandemic – everything I do is online.

From your academic career and your online teaching, can you give an example of an exercise you set to ensure a student’s practical application of philosophy?

I’m actually teaching a class this very semester on Philosophy as a Way of Life, in which students study a philosophical perspective for 2-3 weeks, and engage in some exercises either well-established in that tradition, or in exercises derived from that perspective So, for example, when studying the Epicureans, they learned and applied the tetrapharmakos, or fourfold remedy, which is a cognitive exercise.  As they move into the Cynics in a few weeks, they’ll experiment with voluntary hardship.  When we get to the Stoics, among other exercises, they’ll learn about praemeditatio malorum, and practice it over the course of a week.

Are there any Stoic exercises you regularly practice yourself?

Quite a few, not so much by doing them at a regular time of the day, but rather using them when they’re needed.  I should point out, though, that in ancient philosophy, reading itself is a prime example of philosophical exercise – you think through things along with the writer, and stock up your mind to have what you’ll need ready at hand when you go to do what feel like more “practical exercises”.

Thanks for taking the time to answer these questions, Gregory. A slightly open-ended question to finish off – in terms of what the philosophy means to you, what is Stoicism?

It’s a complex and rich system of philosophy, applicable to and improving of one’s life, progressively developed by some very smart people who over time can become your interlocutors, and even in a certain sense your friends.  It includes, but definitely is not restricted to some key insights like the nature and importance of the virtues, treating indifferent things as indifferent, making proper use of appearances and of our faculty of choice, living in accordance with nature, developing ourselves as social beings, and of course making the distinction between what is and what is not in our control.

What Stoicism isn’t, I’ll add, is a “life hack” or just a set of exercises.  It isn’t a bunch of “quotes” taken out of context.  Probably a good half of the things I see out there in social media advertising themselves as “Stoicism” really aren’t.  Some of those things can be useful for people to get started, but if they really want to get any benefit out of studying and applying Stoicism, they should plan to leave the superficial stuff for the real stuff behind sooner than later

What Gets You Started In The Morning?