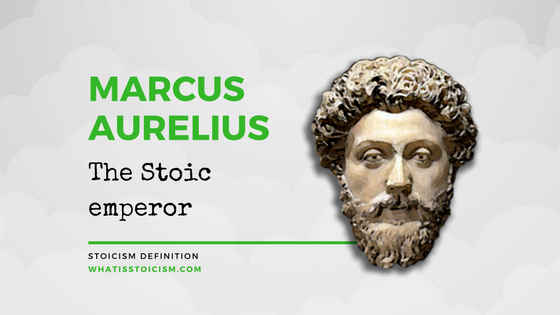 Stoic from beginning to end

Marcus Aurelius was a man who lived by the Stoic laws, which so capably go into making a virtuous man. He did this by nature and also by learned practices, all the way from his youth to his dying breath:

Adorn thyself with simplicity and with indifference towards the things which lie between virtue and vice. Love mankind. Follow God. The poet says that Law rules all. And it is enough to remember that law rules all.

Our view of Roman leadership, especially over the few centuries around the birth of Christ, is tainted by tales of tyranny and callous pompousness. Yet, there were a handful of emperors in Rome, who’ve been assigned to history as decent men. Marcus Aurelius, the Philosopher King, as they call him, was most certainly one of those special few. An introspective man whose collected works are considered some of the most poignant amongst the texts of our Stoic fathers, Marcus took no human relationship lightly.

His writings are spotted with references to his loved ones, teachers and acquaintances and it is clear that he was astutely aware of just what impact the people he knew had on his own nature. He always gave credit where credit was due, attributing his various good qualities to the personalities implicit in his upbringing. Born in Ucubi, Cordoba, to a Praetor and Senator’s son, Marcus Annius Verus and a very, very wealthy woman named Domitia Lucilla, Marcus was destined for greatness. Sadly, he lost his father at a very early age, a handful of years after his own birth in 121 AD. His love for his fellows and his dedication to service shines through in this quotation:

All men are made one for another: either then teach them better, or bear with them.

Marcus Aurelius didn’t know his parents well but relished every snippet of interaction he had with them. Every story told of his father painted him as a pillar of humility and manhood. Although his mother didn’t spend a great deal of time with him, he had profound respect for her. The piety and simple diet she preferred began to groom him for a Stoic way of life, as did the family’s attitude toward wealth, which they didn’t seek to flaunt with pomp and gusto but rather to use wisely in the pursuit of virtue and the service of men.

After his father’s death, Marcus was mostly raised by his nurses and grandfather, also Marcus Annius Verus, who, although he lived in a palace and had all the means a man could ask for, never displayed ill-temper, only the purest of characters. Still, there was no shortage of formidable masculine figures in the boy’s life – his guardians equipped him with the best tutors the civilized world could offer and he was, of course, the best pupil they could have asked for. He studied day and night, mastering geometry, literature, oratory and drama but it was Diognetus, a master-painter who’s lessons were not limited to art, who gave Marcus his philosophical sense of direction.

It was Diognetus who Marcus admired for his freedom from the hindering superstitions of men and also for the Stoic principles he displayed in his conduct and teachings. It may have been him who introduced the young genius to the Discourses of Epictetus, which exercised a profound effect on Marcus’ thought process at a very early age.

Come 132 AD, with Diognetus’ encouragement, Marcus adopted the traditional dress of the Stoics, a modest Greek toga, in spite of his obvious fortune. He was a keen student of the science and, to him, what ascetic habits he could afford, considering his status, came easily indeed. Marcus even slept on the floor, until his mother’s contrary entreaties took effect upon him. He grew into a very well made man, this quote may give you insight into his attitude toward life:

No carelessness in your actions. No confusion in your words. No imprecision in your thoughts.

Public duties began when he became consul in 140 AD and by 161 AD, he was Emperor. He married his cousin two years before being sworn in and they must have been rather busy, since their offspring reached the massive count of 13. Tragically, only four daughters and one son outlived him, which was, no doubt, something of a trial for one who held so dearly the people close to him.

Marcus Aurelius wasn’t the only reigning Emperor at the time, by the way, but ruled jointly with Lucius Verus, who was by no means as well liked and who pretty much took a back seat in the running of things until his death from measles in 169 AD. Marcus had no ties to Christianity, except perhaps the fact that he chose to keep it firmly outlawed in his state.

During a tour of his Eastern Provinces, in the years leading up to 172 AD, he paid a visit to Athens, where he set up the ‘Four Chairs Of Philosophy’ to preserve the Stoic, Aristotelian, Platonic and Epicurean branches. He was determined to be a protector of the science and proudly declared himself as such. Illness overcame him in 180 AD and following his death he was immediately deified, which is no surprise, given his strength of character and steadfast kindliness.

It was only during those last 10 years that Marcus Aurelius compiled his great work, although its format was more like a journal (and, originally, with no title) than an actual philosophical treatise. That, however, didn’t stop the later named ‘Meditations’ from becoming one of the most celebrated pieces of Stoic literature. Consisting of 12 books, written during times of constant strife: a dying wife, a troublesome son who lacked his fathers good temperament and was destined for his seat, rebellions and even war.

This striving is part of the reason why his works are such an invaluable source of lessons in remaining positive throughout life’s tests. Of particular relevance in a world so full of people vying for one’s time, is the lesson he taught about not wasting time on inconsequential people, who don’t work with you toward the greater good. He covered every conceivable notion of importance to governing the will and living rightly, with each so profoundly placed so as to solve it in the readers mind. Read what he warns about leaving things to chance:

The universal intelligence puts itself in motion for every separate effect… or it puts itself in motion once, and everything else comes by way of a sequence in a manner; or individual elements are the origin of all things. In a word, if there is a god, all is well; and if chance rules, do not thou be governed by it.

Indeed, the writings of Marcus Aurelius seem to have come from an unbound well of emotion tamed and insight woven into true intellectual and analytical skill. I will leave you to regard the following:

Zeno of Citium – the founder of Stoicism