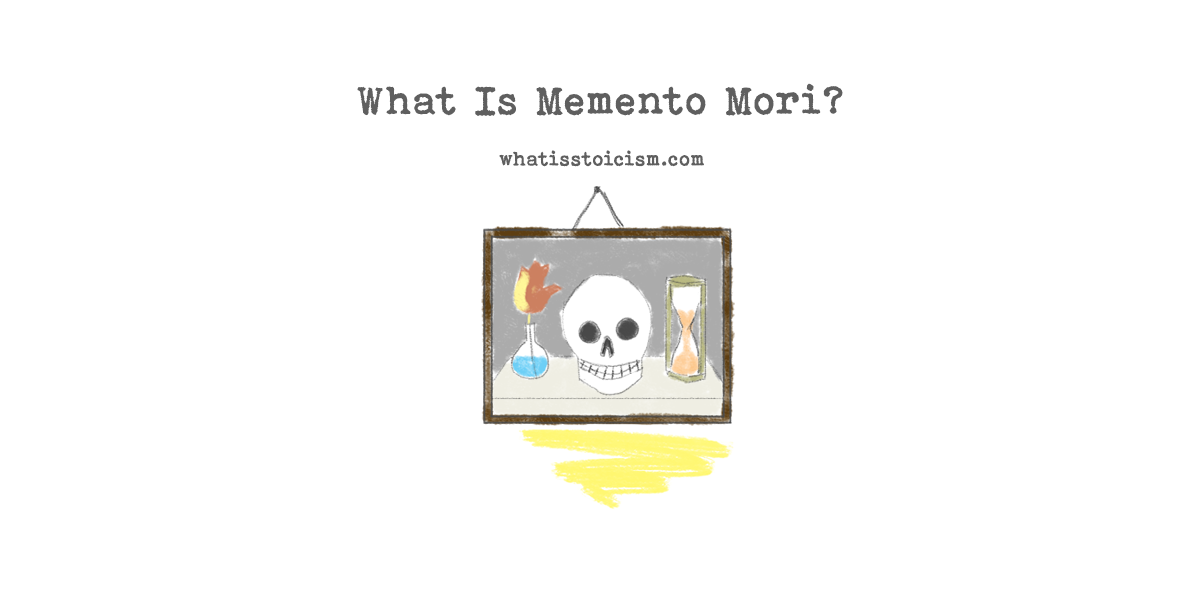 This short explainer will provide you with a straightforward understanding of what Memento Mori is and how you can use it in your Stoic practice.

The phrase “memento mori” is Latin for “remember you must die.” It is a reflection on the impermanence of life and a constant reminder not to take your time on earth for granted and not to worry about things beyond your control.

Memento mori is thought to have its early roots in an ancient Roman tradition.

After a Roman military triumph, a companion or slave would follow behind the victorious general during his ceremonial procession. For the duration of the procession, the slave’s role was to periodically whisper to him, reminding him of his own mortality:

The general would be forced to remember that victory, like life, is fleeting, and not to take it for granted.

Memento mori, however, isn’t confined to ancient Rome and has been adopted in various guises in ancient Egypt, Judaism, Christianity, Buddhism, and many other cultures and religions.

Through the ages, it has also been expressed in various art forms.

Here are some examples:

Cemeteries, tombs, and memorials are common places to find artistic reminders of death. The Capuchin crypt is one of the most compelling. It displays the skeletal remains of former friars with the message:

In Mexico, people throughout the country celebrate the Day of the Dead festival. Some regional variations also exist. In the Mexican state of Aguascalientes for example, the Festival de Calaveras has been running since 1994. This “Festival of Skulls” draws from the Day of the Dead traditions as well as paying homage to printmaker José Guadalupe Posada.

Memento mori as a literary theme goes back a long way. Writers like Michel de Montaigne, who wrote “That To Study Philosophy is to Learn to Die” in 1580, and many before and after him, grappled with the topic of death.

Paintings have long been a recognisable way of expressing the symbolism of memento mori. A well-known example is Philippe de Champaigne’s Still Life With a Skull Vanitas painting (c. 1671) which depicts a tulip, a skull and an hourglass to respectively represent life, death and time.

What The Stoics Said

The ancient Stoics were particularly prominent in their practice of memento mori and frequently meditated on the certainty of death. One of Seneca’s essays is even titled “On the Shortness of Life.”

In his Moral Letter 101, Seneca invokes the concept clearly and urges us to make the most of our time:

“Let us prepare our minds as if we’d come to the very end of life, let us postpone nothing. Let us balance life’s books each day. … The one who puts the finishing touches on their life each day is never short of time.”

Epictetus, meanwhile, taught his students to keep in mind the mortality of their loved ones and appreciate that every time they see them could be the last (Discourses 3.24):

“So too in life; if you kiss your child, your brother, your friend, never allow your fancy free rein, nor your exuberant spirits to go as far as they like, but hold them back, stop them, just like those who stand behind generals when they ride in triumph, and keep reminding them that they are mortal. In such fashion do you too remind yourself that the object of your love is mortal; it is not one of your own possessions; it has been given you for the present, not inseparably nor for ever, but like a fig, or a cluster of grapes, at a fixed season of the year.”

Marcus Aurelius gave us perhaps the most striking image from his Meditations (7.56):

“Think of yourself as dead. You have lived your life. Now, take what’s left and live it properly.”

How Can I Use Memento Mori Right Now?

Using memento mori in an actionable way is about practice. It is, by its nature, a reminder so we need to regularly revisit it to get the benefits.

In Bhutan, there is an old folk saying: “To be a happy person, one must contemplate death five times daily.”

If five seems excessive, why not try once a day? Here are some ideas on how to do it:

What Is Stoic Eudaimonia?