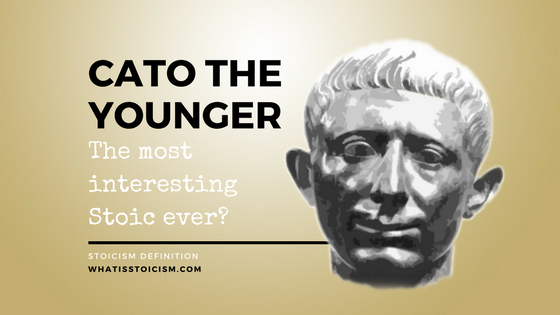 Who was Cato The Younger?

Marcus Porcius Cato Uticensis is a name that may well come up when you Google the word ‘Stoic,’ but you won’t find a list of comprehensive philosophical works by the man. Rather, Cato the Younger is famed for the influence he had on the politics and politicians of early Rome. An influence which had its basis in Cato’s strong Stoic affinity. He’s certainly attributed with many a profound quote, usually distinctly Stoic in nature. He was a rare example of a politician who didn’t just talk relentlessly and do little else. No, Cato advertised his causes through action, in his way of doing political business and his way of being. This was particularly contrary to the practised norm.

Don’t get me wrong, Cato did talk and when he did, people had a tendency to listen. Charismatic as he was, it’s just that he’s remembered more for what he did than what he said. His story was extensively documented by the prolific Greek Biographer, Plutarch, in his ‘Life of Cato’ and the legend is further entrenched with every famous mention of the man (and there were many). From the opening line of ‘Moby Dick’ to the depths of Dante’s ‘Inferno’…let’s just say that Cato made a splash.

Stoic until the end

Born in Rome in 95 BC, Cato the Younger’s life and times has been the subject of poems, books and plays for a thousand years. All that has everything to do with the stubbornness of his beliefs and the way he fought for what he believed in. In the years leading up to Caesar’s reign, Cato, the Statesman, was a rare breed, famously immune to the bribery and corruption which marred the capital. He also opposed Caesar and everything he represented with his very fibre. He did this to his last breath, eventually taking his own life when it became clear that the dictator was unstoppable.

The tale of Cato’s suicide is gruesome and powerfully delivered, in detail, in Plutarch’s biography. I’ll not burden you with the finer details but let’s just say it involves a sword, a failed disembowelment and a subsequent successful one, which was done with hands instead of sword. Can this frightful tale be true? I hope not. One thing is for sure though, his suicide helped to put him in the Stoic hall of fame. Especially since suicide was long considered a fitting end for men of staunch Stoic character. Indeed, you’ll find no shortage of acclaimed Stoics who dictated their own ends; though I must say that Cato’s situation was far bleaker and more despairing than most, at the end. Zeno, for example, cashed in with a smile and a flourish…Cato, not so much.

Another thing that established Cato the Younger as a true practitioner of the Stoic science was his dedication to asceticism. Where many a noted ascetic may well have been compensating for a preexisting cash flow problem, Cato was very well to do. Having inherited a considerable fortune in his early years, he certainly could have afforded a more lavish lifestyle. Yet, on account of his Stoic bent, he ate only enough to sustain him, subjected himself to all types of endurance and desensitisation practices and maintained an excessive exercise regime. One of the things which made him so beloved of his peers was his ability to listen:

Consider in silence whatever anyone says, speech both conceals and reveals the inner soul of man.

He’s known for enduring sickness without complaint, for emerging barefoot and scantily clothed in the cold wind and rain and just for being altogether ‘otherwise’. Even though he had the means to feast and wear fine garments in purple and silk, he hit the streets with the energy gained from beggars fare and dressed in fashions all of his own, usually a commando style toga getup. It was his personal pleasure to attract the scorn and disapproval of passers by, believing that he could learn far more from being the centre of ridicule than from being ignored. He wanted people to know that he was who he was and no two ways about it. Cato loved his wine and is said to have enjoyed cheap wine a whole lot more than expensive wine. Another thing he loved was cabbage. “The cabbage surpasses all other vegetables…it will make you feel as if you had not eaten, and you can drink as much as you like.”

Quirks aside, Cato the Younger was brave. Fear, fear was the enemy! Before his political fame, at the age of 28, he had commanded his own legion. He was also said to have marched alongside his horse, instead of riding it. He slept in the trenches with his men and was always on the front line in battle. On one occasion, having being assailed en-route to the polls at election day by the minions of his enemies, who were front runners for the vote, Cato bravely walked the final stretch alone and unprotected, with an injured arm. He did this even after many of his men had been slain and his brother had fled home in fear. He’s lucky though that the assailants orders had been merely to wound and frighten him but not to kill. There’s also an interesting record of him being manhandled at the public baths one day. When his attacker actually apologised for the misunderstanding, Cato responded with: “I don’t even remember being hit,” in true Stoic style.

George Washington is known to have had great respect for Cato. He even had a play about his life performed for the continental army encamped at Valley Forge. Indeed, he turned Cato into a symbol of the fight for liberty. Perhaps the following quotes from Cato can help you understand why.

By liberty I understand the power which every man has over his own actions and his right to enjoy the fruits of his labour, art and industry, as far as by it he hurts not the society or any member of it…

By far my favourite saying by Cato the Younger is the following, on the injustice of inaction:

In doing nothing, men learn to do evil.

Come 46 BC and Caesar’s rise to power, Cato the Younger gave up his struggle. Taking a copy of Plato’s ‘Phaedo,’ he retired to his chambers, read the text through twice and then, tragically, took his own life.

Zeno of Citium – the founder of Stoicism