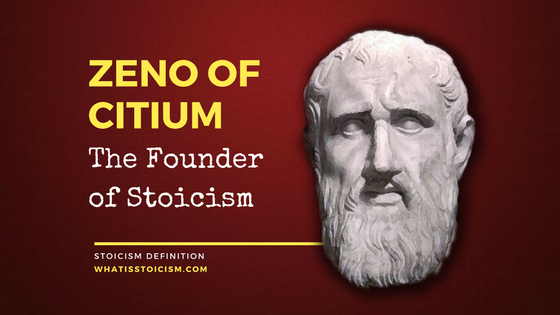 In his considerable lifespan of around 72 years, from 334 to 262 BC, Zeno of Citium found the time to make quite a few waves. His teachings have been influential enough for astronomers to name a crater on the moon after him and what’s more, he was, in fact, the founder of Stoicism. If you’re wondering about the roots of the word ‘Stoic,’ the name was simply derived from the fact that he taught in the Agora of Athens, which was also known as the Stoa Poikile.

Born in Citium, Cyprus, the so called details of his life come in the form of legends, passed down in Diogenes’ ‘Lives and Opinions of Eminent Philosophers,’ circa 300 AD. Zeno is claimed to have arrived in Athens as a shipwrecked merchant. On his last legs, he wandered into a bookshop. There he found a salvation of sorts at the hands of Socrates (or his teachings, at least, since the man was long dead). Questioning the store owner, he was offhandedly directed to Crates of Thebes, a Cynic of note but a philosopher nonetheless.

Zeno of Citium was utterly taken by the art and science of philosophy. But he was perhaps a bit too dignified to embrace the shameless displays that came naturally for the true cynics, such as public urination, even fornication. No, Zeno joined the ranks of the greats when he took the initiative to steal the teachings he regarded as sound and replace the ones he didn’t with his own conclusions. Hence, Stoicism has its roots in Cynicism but neglects the teaching that moral indifference can be of any great value. It’s somewhat more dignified. He was a philosopher of the truest kind, as is evident in his teaching:

“It is better to trip with the feet than with the tongue.”

This ‘moral’ bent didn’t necessarily make Zeno an upstanding citizen though, the cynic roots ran deep. Here walked a dishevelled creature, sun scorched, often begging for coin, who scorned the rich of Athens and blind refused to do aught but contemplate and preach. He had somewhat of a crude tongue, it is said, which may have had a lot to do with his penchant for strong wine in the sun and some figs to chase. Nevertheless, he made many a wave and pearls of wisdom come from all quarters, this we know.

So, to understand the man, you need to understand his teachings. And since Stoicism dominated the Roman and Hellenistic periods, even going on to influence Christianity, there must indeed be pearls of wisdom there. The problem is, it isn’t all that easy to pinpoint which of those pearls were solely his. None of Zeno’s actual works have survived. What we know, we know through anecdotal evidence and quotations delivered through the works of other Stoics. Many of these may have added to and altered the original gist.

It’s clear that the man adhered to the idea of an ideal state of virtue which was largely based on morality and ethics. Hence he had no love for cynical indifference. He was, however, all about indifference:

“Steel your sensibilities, so that life shall hurt you as little as possible”.

He taught that Stoicism would result in a freedom from pain and passion, selling ‘apatheia’ (apathy…ring a bell?) as the absence of passion after which all Stoics should strive. His understanding was that emotions and animalistic desires stood in the path of wisdom and only in their absence would we develop and apply wisdom to our lives and works. To quote Zeno:

“Man conquers the world by conquering himself.”

Furthermore, since reason governs nature and is accessible to any of us, there will always be a correct way of acting in any given situation. A natural one, a reasonable one. He called this state of acting in a way befitting nature, Katorthomata. This was a state of acting under the governance of reason, a pure force of nature and really, for Zeno, being one with God, the Universe, the Divine Fire. In Zeno’s words:

“All things are parts of one single system, which is called nature; the individual life is good when it is in harmony with nature.

One of his better remembered works was entitled “The Republic”. If that sounds familiar it’s because Zeno actually wrote it in direct opposition to Plato’s work by the same name. Only, Zeno’s Republic rejected the in-virtuous, practised free love and the acceptance of sexual preferences considered deviant at the time, homosexuality and prostitution, for example. Perhaps this had something to do with his own sexual persuasion, which is completely unknown – one thing is for sure, he rarely kept the company of women. Zeno of Citium had a good spirit, believing that, “All the good are friends of one another.”

One thing we do know is that regardless of quirks in his teachings, he stayed true to his ascetic background. The simple life he favoured. No courts or temples but wine and figs; no money, just love. Indeed the universe was full of love for Zeno. His metaphysical teachings offered that the universe, the divine creative fire, was a vessel for good and good alone. That we were a part of that same fire and that nothing would ever be lost to the system as matter cycles through the ether. One element to another, from fire down to water and air and so on; our souls abiding by our Fates but allowed free-will by the graces of a fundamentally good universe. Very nice indeed.

Now, one teaching that I find to be particularly relevant and resounding to this day is Zeno’s view of Fate. The idea finds parallels in the peaceful but very logical systems of Eastern philosophy, such as Taoism and Hinduism. The idea that to fuss and groan about ill times is completely counter productive because what happens, happens, as was fated. Lamentation is just not reasonable, according to Zeno.

Zeno of Citium – The Legend

The legend of Zeno of Citium’s life must have gained great traction at his death. Especially as, it is said, he executed it in utter Stoic style. At the age of 72, after one of his lectures, he tripped and broke his toe. He felt the call of nature at that point, apparently, and quoting from Niobe exclaimed: “I come, I come, why dost thou call for me?” At which point, he took it upon himself to die, by katorthomatic self strangulation. He held true to his teaching that, “No evil is honourable: but death is honourable; therefore death is not evil.”

Of all his teachings, one that exemplifies Zeno of Citium and is just as poignant today as it was then is the following:

“No matter whether you claim a slave by purchase or capture, the title is bad. They who claim to own their fellow men look down into the pit and forget the justice that should rule the world.”