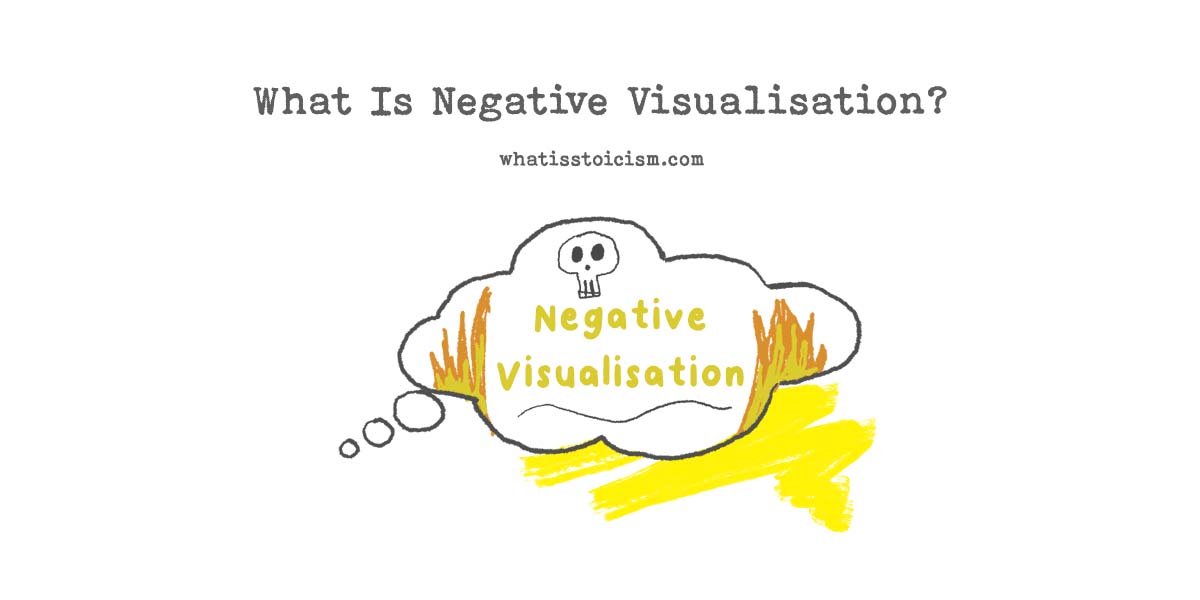 This short explainer will provide you with a straightforward understanding of what negative visualisation is. You will also learn how you can use it in your Stoic practice.

Negative visualisation is a technique by which we regularly spend a short amount of time imagining the negative events that could befall us. The purpose is to develop a greater appreciation for the things in your life, make the most of the time you have with loved ones, and even prompt deliberate planning for when things go wrong so as to lessen fear of the future.

The practice is thought to have originated with the Cyreanic philosophers before being adopted by the Stoics. Cicero refers to the method in his Tusculan Disputations (45 BC):

I am ready to borrow of the Cyrenaics those arms against the accidents and events of life by means of which, by long premeditation, they break the force of all approaching evils. And at the same time I think that those very evils themselves arise more from opinion than nature, for if they were real, no forecast could make them lighter.

The Stoic philosopher Seneca helped popularise the technique by recommending its use in his Letters to Lucilius. He also summarised it well in his Consolation to Marcia:

He robs present ills of their power who has perceived their coming beforehand.

As a result of such promotion, it became a common Stoic spiritual exercise.

The use of the method was passed through the ages and remains popular today. It is even recommended in some approaches to Cognitive Behavioural Therapy.

What The Stoics Said

Seneca wrote on the topic regularly, particularly when advising his friend Lucilius:

I will conduct you to peace of mind by another route: if you would put off all worry, assume that what you fear may happen will certainly happen. Whatever the evil may be, measure it in your own mind, and estimate the amount of your fear. You will soon understand that what you fear is either not great or not of long duration.

He stressed the importance of continuing to practice negative visualisation even when things are going well:

It is in times of security that the spirit should be preparing itself to deal with difficult times; while fortune is bestowing favours on it then is the time for it to be strengthened against her rebuffs. In the midst of peace, the soldier carries out manoeuvres, throws up earthworks against a non-existent enemy and tires himself out with unnecessary toil in order to be equal to it when it is necessary. If you want a man to keep his head when the crisis comes, you must give him some training before it comes.

And how the technique can take the sting out of future misfortune:

Nothing happens to the wise man which he did not expect—we do not make him exempt from the chances of human life, but from its mistakes, nor does everything happen to him as he wished it would, but as he thought it would: now his first thought was that his purpose might meet with some resistance, and the pain of disappointed wishes must affect a man’s mind less severely if he has not been at all events confident of success.

On Tranquility Of Mind 13

One of Marcus Aurelius’s most well-known notes to himself is a morning reminder using the same technique:

At the start of the day tell yourself: I shall meet people who are officious, ungrateful, abusive, treacherous, malicious, and selfish. In every case, they’ve got like this because of their ignorance of good and bad. But I have seen goodness and badness for what they are, and I know that what is good is what is morally right, and what is bad is what is morally wrong; and I’ve seen the true nature of the wrongdoer himself and know that he’s related to me—not in the sense that we share blood and seed, but by virtue of the fact that we both partake of the same intelligence, and so of a portion of the divine.

None of them can harm me, anyway, because none of them can infect me with immorality, nor can I become angry with someone who’s related to me, or hate him, because we were born to work together, like feet or hands or eyelids, like the rows of upper and lower teeth. To work against each other is therefore unnatural—and anger and rejection count as “working against.

Keep before your eyes day by day death and exile, and everything that seems catastrophic, but most of all death; and then you will never have any abject thought, nor will you crave anything excessively.

How Can I Use Negative Visualisation Right Now?

Through negative visualisation we can train ourselves on the bad outcomes of realistic life scenarios. Doing this desensitises our reactions in preparation for their real-life occurrence. We can start small by limiting the severeness of negative visualisation from as mild as thinking of a minor inconvenience. Then we can work our way up to more severe practises, like imagining our worst fear has occurred.

Here is an example of a negative visualisation practice you can try.

1. Start by taking stock of things that are valuable to you and note them down. Here are some ideas:

2. If you can think of your own, add it to the categories above.

3. Set a reminder on your phone to schedule negative visualisation sessions. Don’t overwhelm yourself to begin with, once or twice a week should be enough to get you into the habit.

4. In each session, spend 5-10 minutes working through one of the categories you previously noted and do the following:

The benefit of these sessions is a feeling of appreciation for the things you already have in your life. You’re also preparing yourself mentally should you ever lose them. This allows us greater tranquillity in the present as we feel more prepared for the future.

Don’t be anxious about the future. You’ll come to it (if you must), equipped with the same reason that you apply now to the present.

What Is The Stoic Reserve Clause?