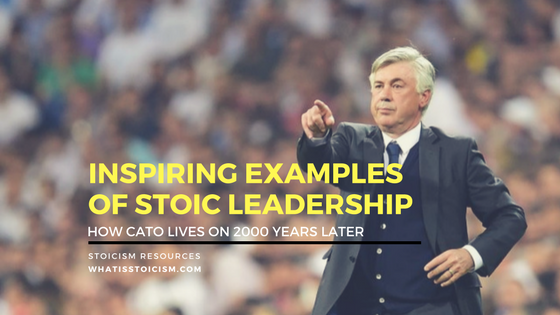 Marcus Porcius Cato has been admired by countless high-profile leaders and dignitaries since his death over 2000 years ago.

Leaders like Benjamin Franklin, John Adams and George Washington were all hugely inspired by the examples set by Cato the Younger. It was largely Joseph Addison’s 18th Century play Cato: A Tragedy that helped maintain the Stoic’s legacy for these future generations. Such was Washington’s admiration for the man that he even staged a performance of the play for American troops at Valley Forge.

It’s easy to see why leaders over the ages have gravitated toward Cato when you examine his leadership style, which you could perhaps call Stoic leadership. It’s a style that was staunchly grounded in setting the right example and even more admirably, one that didn’t put himself above his subordinates. It might still be the most effective leadership style today, albeit a rare one.

Cato’s strict, Stoic personal standards made leading-by-example natural for him and although he could certainly be vocal on matters of principle, his effectiveness was in his influence rather than his direct orders. As Italian football coach Carlo Ancelotti’s Quiet Leadership book urges: “Influence, don’t command.”

“If your actions inspire others to dream more, learn more, do more and become more, you are a leader.”

Simon Sinek includes the above quote from John Adams in his book Leaders Eat Last, in which he outlines the importance of people in positions of power prioritising those under their control. It’s based on the practice of military leaders deliberately allowing everyone else to eat before them at meal times to promote the example of sacrificing personal interests to support the team. Cato himself was also known to do this all those years ago.

Indeed, as a military tribune and later a praetor, it would have been easy for Cato to put himself first and gorge on the spoils without looking out of place. The fact that he didn’t, and that he was proudly incorruptible amidst a time rife with bribery and backhanded manoeuvring, makes his example all the more memorable. The strength of his resolve stood out even in those days, much as the rejection of material gain and luxury of a leader like Jose Mujica, former president of Uruguay, stands out today.

Although he could be overtly stubborn in defence of his principles, Cato’s unflinching resolve still endeared him to many followers. Even more telling, it encouraged them to act similarly.

In May 2011, despite winning a Premier League and FA Cup double the previous season as coach of Chelsea, Carlo Ancelotti was unceremoniously sacked by club owner Roman Abramovich. However, it was those he led that still saw his true value. Like Cato’s supporters who accompanied him home on his final day of service as quaestor to thank him, the Chelsea players later took their deposed boss out to dinner to show their appreciation. It was a rare gesture in the fast-moving, competitive world of professional football where lasting connections often don’t have time to develop. It was also a fitting one for the quiet leader who made no fuss over his abrupt dismissal.

As is alluded to many times in Quiet Leadership, it is not just Ancelotti’s qualities as a great coach, but primarily his principled example of treating everyone as his equal, his genuine interest in his players as people rather than just athletes, that makes him so popular (not to mention successful).

It was 67 BC when Cato first took command as military tribune in Macedonia in what was the first of several different positions of authority he would assume in his life. The following short excerpts from Rob Goodman and Jimmy Soni’s excellent and comprehensive book Rome’s Last Citizen sum his leadership up perfectly:

“What would the men of Cato’s legion have made of their new commander? He approached camp not on horseback, as expected, but on foot. This was not one of the social climbers whom they had come to expect as commander. Here, it seemed, was a man ready to live as hard as the common soldiers lived and to impose on himself the same discipline he imposed on them.”

“For a senator-in-waiting, Cato’s unpretentious willingness to share hardship was mildly shocking. It won his men’s affection in a way that no Stoic lecture could have.”

Later, towards the end of his life, Cato would lead a small band of republican forces across the desert to Utica in defiance of Caesar. According to the Stoic poet Lucan, even in this time of great turmoil he still put his troops first:

Spare in his sleep, the last to sip the spring
When at some rivulet to quench their thirst
The eager ranks pressed onward, he alone
Until the humblest follower might drink
Stood motionless.

Leaders don’t only eat last, they drink last too.

In donating 90% of his salary to charities benefiting poor people while President of Uruguay from 2010-2015, it would seem that’s also very much an ethos that Jose Mujica subscribes to. Whether he has an interest in Stoicism isn’t clear, but he certainly lives by extremely Stoic values as Cato did. He was even dubbed the world’s poorest president due to his refusal to live in the luxurious house that the state provides for its leaders, instead preferring to continue residing frugally on his ramshackle farm.

Any Mujica interview you watch inevitably throws up pearls of Stoic-esque wisdom. You can almost imagine the following coming from Cato himself:

His unflinching approach is very much the embodiment of “Walk with kings but never lose the common touch” from Rudyard Kipling’s If. He may be an unorthodox leader, and like Cato you may never live his exact lifestyle, but also like Cato you can’t help wanting to get a little closer to it.

To get a little closer, you could always start with smaller gestures like the football manager mucking in to sweep up broken glass or the multi-billionaire who eats lunch with his employees in the company cafeteria.

Let’s face it, what resonates more with you? Who would you rather follow? The inaccessible superior locked away in his executive office or the one who “mucks in” with everyone else?

Even if you don’t hold a so-called position of power, you can still consider yourself a leader. You can still exhibit Stoic leadership. To your friends, your family, your colleagues, anyone who observes your actions. Cato’s example was one of the gold standard – something to aspire to. Anyone could follow whether they were officially under his charge or not. They may have fallen short more often than not but the value was in the journey. Improving a little each time. Inspired by a leader.

If you do happen to assume a position of power you don’t have to move to a ramshackle farm, forego 90% of your salary or even practice unwavering frugality. Maybe you could let your subordinates eat and drink first more often than not, though.

“Yet even in his failings, Cato remains indisputably great. He is the kind of man that every statesman aspires to be: physically tough, intellectually brave, unflinchingly principled, beloved despite his warts. In many ways, he is the model of what we say we want in a leader.”