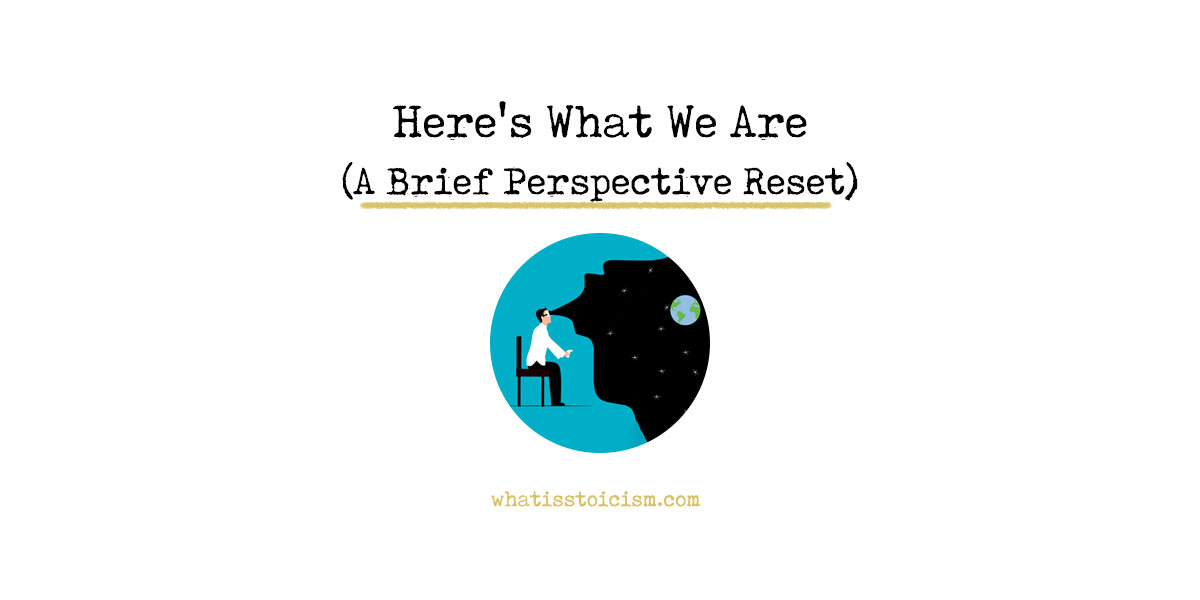 Here’s what we are: the most abundant and widespread species of primate.

One species among millions of other species that exist on the planet called Earth.

Here’s what a species is: a word that our species made up to mean a group of living organisms consisting of similar individuals capable of exchanging genes or interbreeding.

A word is a distinct sound our species makes or a combination of letters written down or printed.

The sound or letters usually represent some kind of meaning. We derive this meaning ourselves.

Earth is the third planet away from a ball of hot plasma known as the Sun.

Earth is a terraqueous orb. It orbits the ball of hot plasma.

Our species divided the surface of the orb into regions using mostly imaginary lines.

Each member of our species begins their life in one of these regions and usually feels an affinity to that region on that account.

Here’s what we think we are: the most important thing in the universe.

The universe is all of space and time and their contents, including planets, stars, galaxies, and all other forms of matter and energy.

Anytime life gets too serious, I try to remember that I haven’t received evidence yet that we are the most important thing in the universe.

I try to remember to zoom out from my perceived big problems and put them into perspective.

Here’s what an above-average human lifespan is: 80 years.

That’s just over 4000 weeks. This is how long you breathe for if you’re “lucky”.

Here’s how old our species believes our planet, with all its imaginary regions, to be: 4.5 billion years.

If we keep breathing for an above-average time, we exist for 0.00000178% of the time our planet has existed for.

We think we are big but we’re small. We think we have a lot of time but we don’t.

I’m not trying to sound pessimistic or defeatist.

I don’t mean to diminish the wealth of experience we can gain in the time we have, and I certainly don’t mean to make the reality of our existence seem bland or mechanical by stating it in such objective terms.

It’s the meaning we give to our lives that makes them happy ones.

It’s the awareness of our limited time that prompts us to live a good life while we can.

It’s our view of the vastness of everything around us that puts our everyday worries into perspective and reminds us that this too shall pass.

Here is what Marcus Aurelius concluded about the size of the Earth in the 2nd century AD: it is no more than a speck.

In the 21st century AD, pictures from NASA’s James Webb telescope proved that to be an understatement.

We may be a blip on the timeline of existence but we’re also huge because we’re connected to it all.

If you woke up this morning, if you’re reading this now, here is what you have: time to live.

Here is what you control: your thoughts, your intentions, and your actions.

Here is who you’ll benefit from showing kindness to: everyone.

Here is the only thing you need to be: a good person.