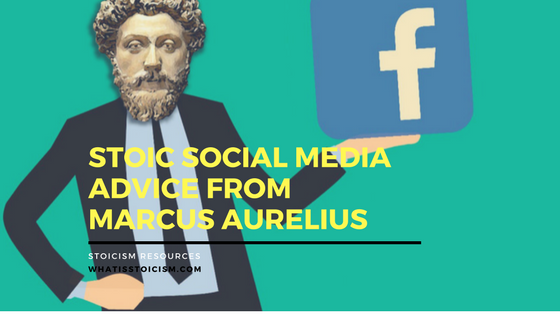 One of the most attractive things about Stoic philosophy is how relevant the 2000-year old teachings still are today.

Let’s face it, pearls of wisdom like “If it is not right do not do it; if it is not true do not say it” and “While we wait for life, life passes” never really go out of fashion.

One thing the likes of Marcus Aurelius and Seneca couldn’t do all those years ago however was dole out social media advice and philosophise on social networks, at least not the online kind that take up so much of our time today.

Having said that, the Stoics were acutely aware that humans are naturally social and so some of their thoughts around being social still translate well when applied to our use of platforms like Facebook and Twitter.

The Greek philosopher Aristotle, although at odds with some of the Stoics’ beliefs, still got this one right in their eyes:

“Man is by nature a social animal.”

Taking the above quote into account makes being social doubly important to the Stoics due to their ideal of living “in accordance with Nature.”

Speaking of the well-known platforms, at the end of 2017, Facebook boasted 2.2 billion monthly users, while Twitter had 330 million. That’s a lot of people being social.

Or at least that’s the assumption. If you’re checking in everywhere you go, if the only photos you post are selfies, or if more than one of your recent statuses end with “rant over!!!”, then perhaps you aren’t being as social as you think.

Drawing that conclusion isn’t to be judgemental, it may actually be an observation that could change things for the greater good, and even increase your own enjoyment of using the social networks.

When you hit submit on those posts what’s the first thing you think? There’s a good chance it’s “I hope people like this.”

Apparently a like equals a hit of dopamine. It feels good. But what precedes that? A certain amount of anxiety. The potential embarrassment of it not being liked, or worse, ridiculed. Being derided by even one person does not feel good.

And that anxiety can come in other forms too. Maybe you rarely post but still spend a lot of time scrolling through other people’s updates. Wow, everyone else’s life if so much better than mine! If that thought comes to mind, just remember this –

A fifth of young people admit their online profile bears little resemblance to reality, and that their recollection of past events has been distorted by their own fabrications.

So, what would Marcus Aurelius say? Probably this:

By placing importance on likes and comments, you’re putting your mood in the hands of others, allowing them to drip-feed you dopamine when they see fit. Don’t outsource your self-esteem.

Rather than waiting to take, you might feel better if you give more. Marcus Aurelius again:

Men exist for the sake of one another.

To do this you could make small changes to the way you post. Perhaps try one of these instead the next time you’re about to post a selfie –

Even if these things don’t garner as many likes, after posting one of them you can be happy within yourself that it’s likely to be useful to at least one person who sees it. That usefulness doesn’t depend on receiving the “thumbs-up”.

Sharing a funny video or meme isn’t a bad thing though! It’ll likely make someone laugh and brighten up their day. In that sense you’ve impacted someone positively. But that’s a fleeting moment and if that’s the basis of all your posts then you might think of varying them a bit.

It’s not so much a vision where everyone’s holding hands and fake full-tooth smiling at each other, just the idea that by improving ourselves a little at a time we can inspire that in others. By all means, post a selfie every now and again, just not every day.

“Moderation in all things, especially moderation.”

If you already do follow a “useful usage policy” and dislike what you’re seeing from others, then continue to be the change you want to see. And/or just block them. 🙂

To give the final word to Marcus:

The happiness and unhappiness of the rational, social animal depends not on what he feels but on what he does; just as his virtue and vice consist not in feeling but in doing.