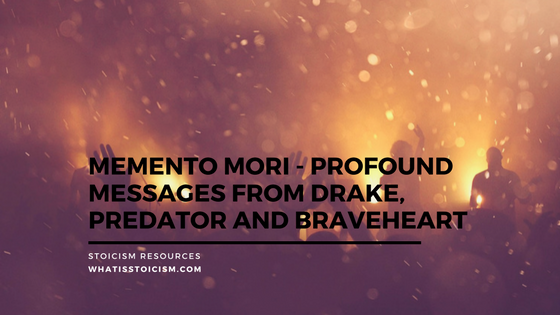 If you’ve ever seen the movie Predator, you’ll remember the character Billy Sole using that line in a much calmer, matter-of-fact manner than might be expected in an action film.

In that instance it was used to convey the danger of a more imminent demise, but if you think about it, it’s a sentiment that applies to us all at any given time. As morbid as that sounds, remembering you’ll die is a thought that can be vital in remembering to live.

Although the natural ageing process and eventual passing away takes no effort on our part, living (really living) does. Of course, “really living” is open to everyone’s own interpretation and one person’s version of a full life will differ from another’s, but it all starts with remembering our time is limited. And then making the decision to make the most of it.

It’s something the rapper Drake seemed to be aware of when he wrote this line for the song Moment 4 Life:

“I’m really tryna make it more than what it is
Cause everybody dies but not everybody lives! ”

There are many different ways of phrasing the above line and indeed William Wallace even used a slight variation of it in Braveheart when he said: “Every man dies, not every man really lives.”

None of the three references I’ve just made would be considered particularly recent anymore (Predator – 1987, Moment 4 Life – 2010, Braveheart – 1995) but they look cutting-edge when compared to another great reminder of death – The Capuchin Crypt.

Located beneath the church of Santa Maria della Concezione dei Cappuccini in Rome, the crypt displays the skeletal remains of many Capuchin friars as a silent reminder of the swift passage of life on earth.

One of the most striking rooms down there is the “Crypt of the Three Skeletons.” Unsurprisingly it houses a trio of bony roommates. One represents life, another death and the final one symbolizes good and evil deeds judged by God. The skeletons are accompanied by a placard with a stark reminder –

These reflections on mortality all embody the practice known in ancient times as “Memento Mori” which translates from Latin as “Remember that you will die.” The practice has been adopted by many cultures and perhaps its greatest symbolism is in Philippe de Champaigne’s Still Life With a Skull Vanitas painting (c. 1671) which depicts a tulip, a skull and an hourglass to respectively represent life, death and time.

The memento mori message in itself is the perfect symbol for life and mortality – simple yet deep, brief but important, a reminder of the end but a hopeful prompt for the present.

It’s certainly not a difficult one to remember, but some people go further and make it unavoidable for themselves by having the phrase tattooed on their body. What better way to constantly influence your own mindset than that?

After reminding us in 2010 that not everybody lives, Drake seemed determined to take heed of his own caution and released the aptly-titled mixtape “More Life” in 2017, which he commemorated with his own version of Montaigne’s tulip – a tattoo of a hibiscus flower.

In this instance the emphasis of “more” life is on the quality rather than the quantity.

“Our lifetime is so brief. And to live it out in these circumstances, among these people, in this body? Nothing to get excited about. Consider the abyss of time past, the infinite future. Three days of life or three generations: what’s the difference?”

In a similar vein, William Wallace told his fellow Scots in the famous speech in Braveheart, that doing something worthwhile now, even at some risk, is better than treading water and having nothing to speak of later. That’s really living.

“Life is like a play: it’s not the length, but the excellence of the acting that matters.”

Of course, only you know what you need to do to achieve your goals, but if remembering death gets you thinking about taking action – thinking about living – sooner then that’s a good start. Who knows, if more people start to heed this message then maybe an action movie will one day feature the line “We’re all gonna live.”