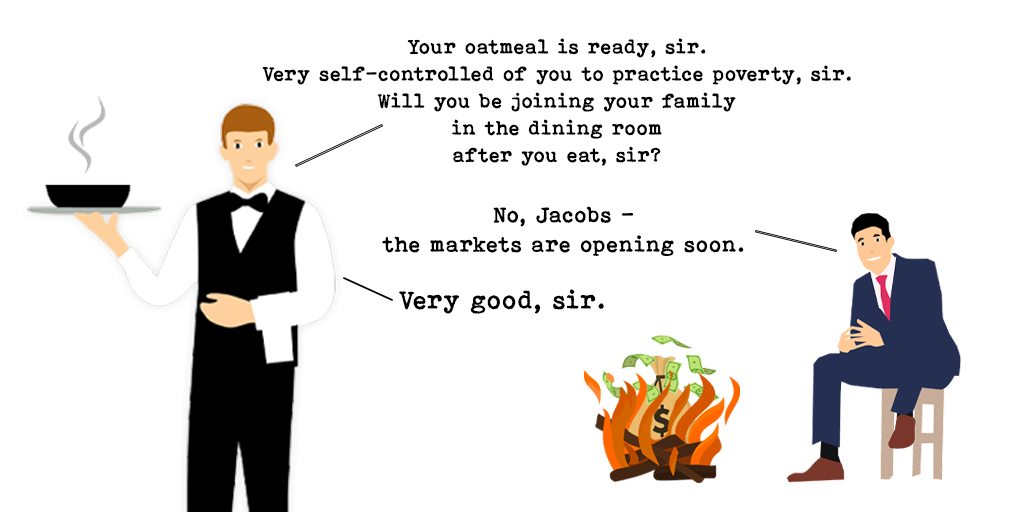 By Kai Whiting and Allan John

The Stoic founder Zeno of Citium held that excellent character must be the guiding light for your interactions with other people and the world around you, exemplified by your adherence to, and enactment of, the four Stoic virtues of courage, justice, self-control and wisdom.

The Stoic practice is fundamentally about using your capacity for reason to decide what is appropriate (kathekon) for you to do, according to your role.  If the businessman is to act appropriately, he must act courageously, justly, wisely and in a self-controlled manner.

You could hardly count as just if you were not brave and temperate too, or else you might be deflected from just behaviour through intimidation or bribery.

How appropriate is it for the businessman, to decide that he would prefer to eat alone rather than with his family, if his only reason for doing so is to build his discipline? What has justice got to do with his decision to restrict his diet to oatmeal in the comfort of his own home? Is that really the best way for him to practice self-control? Is his practicing of poverty virtuous or mere virtue signalling?

There is nothing particularly Stoic in testing your discipline or building resilience. Furthermore, it’s the “why?” and “what for?” which makes the moral difference. Ultimately, what you decide to eat is neither good nor bad, in and of itself. You might be acting with self-control but then again you might not. Context matters.

As stated in Kai Whiting and Leonidas Konstantakos’ book Being Better: Stoicism for a World Worth Living in:

Making wiser choices about what to eat could include learning about commercial food production and fair trade and changing where you shop and who you buy food from. As you save money and consider the Stoic virtue of justice, you might spend some of the savings on just causes by supporting local or grassroot initiatives. You could invest money in a small start-up that aims to bring local produce to people’s doors or join neighbours who are developing a communal garden. Such actions are in line with the ancient Stoic practice of bringing people into our inner circle, or under our wing. They also help us better understand what needs to be done and what lies within our power to make the world a nicer place.

Remember, there is no rule in Stoicism about eating habits. What is appropriate will always depend on who you are, where you are and numerous other factors. This is why the Stoic philosopher Epictetus says in Discourses 1.1:

Kai Whiting is a co-author of Being Better: Stoicism for a World Worth Living in. He is a researcher and lecturer in sustainability and Stoicism based at UCLouvain, Belgium. He Tweets @kaiwhiting and blogs over at StoicKai.com

Tags: What Stoicism is NOT

According To Modern Stoics, What Is Stoicism?