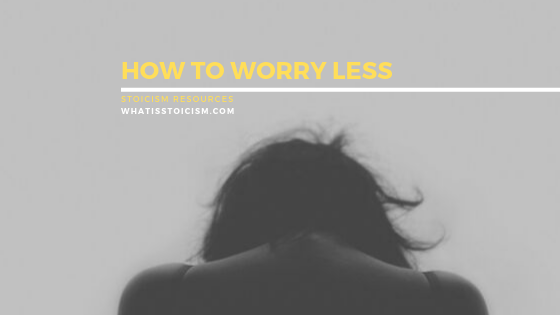 Right now we’re all worried about something. The consequences of a past action, the status of a current relationship, how life will turn out for us years from now – whatever it may be, we worry that ultimately it won’t be favourable to us.

So what is a problem? Oxford again: a problem is a matter or situation regarded as unwelcome or harmful and needing to be dealt with and overcome. Regarded. To regard: to consider or think of in a specified way.

“Regard” being synonymous with “judge”, we can link this to what Epictetus said about worrying:

“It is not things that worry us, but our judgements about things.”

So, we worry about things that we judge to be unwelcome or harmful, but it is the judgement that is the source of the worry, not the thing itself.

The Dichotomy Of Control

Epictetus’s formula for making these judgement calls was straightforward – we need worry only about things which are within our control, everything else happens as it should and we need not be concerned by it.

You will lament, you will be disturbed, and you will find fault both with gods and men. But if you suppose that only to be your own which is your own, and what belongs to others such as it really is, then no one will ever compel you or restrain you. Further, you will find fault with no one or accuse no one. You will do nothing against your will. No one will hurt you, you will have no enemies, and you not be harmed.”

Simply telling yourself not to worry about things outside your control is easier said than done of course, I can definitely attest to that. There are, however, techniques which work well in concert with the Stoic principles that allow us to train our minds over time to make better judgements. (Indeed, the fewer value judgements – whether something is “good” or “bad”-  we attach to things, often the better off we are.)

Here are three techniques that, when practised regularly, can help you worry less:

Cognitive distancing is the ability to distinguish our thoughts from external reality, to separate value judgements from outside events.

In his book How To Think Like A Roman Emperor, Donald Robertson offers a multitude of cognitive distancing techniques that are derived from Cognitive Behavioural Therapy –

Donald also described a further technique when I interviewed him recently:

One of the best ways to avoid making value judgements is to describe things in less emotional terms, just like the Stoics did. For example, a Stoic might say their wallet was stolen but they would not allow themselves to go on about how awful it is. In modern CBT this is called decatastrophizing. (It’s also what I tried to do in the introduction of this piece by breaking down the definitions of “worry” and “problem”).

Again from How To Think Like A Roman Emperor:

Aaron T. Beck, the founder of cognitive therapy, advised that clients suffering from anxiety should write “decatastrophizing scripts” in which they describe distressing events factually, without strong value judgments or emotive language: “I lost my job and now I’m looking for a new one” rather than “I lost my job and there’s nothing I can do about it—it’s just a total disaster!” Think about it: when you’re distressed, don’t you tend to exaggerate and use vivid, emotional language to describe things, both to yourself and other people?

Try it out now – write down a description of a thing or event that is worrying you in the plainest, most unemotional language you can. Reading it back, it should seem a lot less catastrophic.

This technique comes from a Tim Ferriss TED talk. I watch it every few weeks to remind myself and I highly recommend it if you haven’t seen it:

“My problem was monkey mind – super loud, very incessant. Just thinking my way through problems doesn’t work. I needed to capture my thoughts on paper. So I created a written exercise that I called “fear-setting,” like goal-setting, for myself. It consists of three pages. Super simple.”

The three pages are for making a number of lists:

Page One: Make three lists, with 10–20 entries each

Use the following headings:

Page Two: What might be the benefits of an attempt or partial success?

If you attempted whatever you’re considering [the solution to your problem], might you build confidence, develop skills, emotionally, financially, otherwise? What might be the benefits of, say, a base hit? Spend 10 to 15 minutes on this.

Page Three: The Cost of Inaction

Humans are very good at considering what might go wrong if we try something new, say, ask for a raise. What we don’t often consider is the atrocious cost of the status quo — not changing anything. So you should ask yourself, if I avoid this action or decision and actions and decisions like it, what might my life look like in, say, six months, 12 months, three years? Any further out, it starts to seem intangible. And really get detailed — again, emotionally, financially, physically, whatever.

Here is a handy PDF template for fear setting.

Bonus: The One Second Happiness Hack

This one is not so much a technique but more of a perspective, and comes courtesy of a blog post by James Altucher:

When my wife left me, I couldn’t change the reality. I couldn’t make her stay.

I was sad, scared, miserable, depressed.

But I could change expectations. I could say, “perhaps this is for the best” and figure out the reasons why and have hope for the future.

I’m not saying it’s easy to do that in a second. But it’s possible. And that changes immediately how happy you can be.

We are all dealt a new hand of cards every few seconds. You play the hand you are dealt instead of whining about it. That’s how to win.

My therapist once told me this. She’s the best.

And using the 2000-year-old words of Epictetus to summarise the above, “Do not seek for things to happen the way you want them to; rather, wish that what happens happen the way it happens: then you will be happy.”

As much as I’d like them to, these techniques won’t make you worryless, but I hope they make you worry less. If not, I hope that cheesy wordplay at least raised a smile.

A Reminder For You And Me