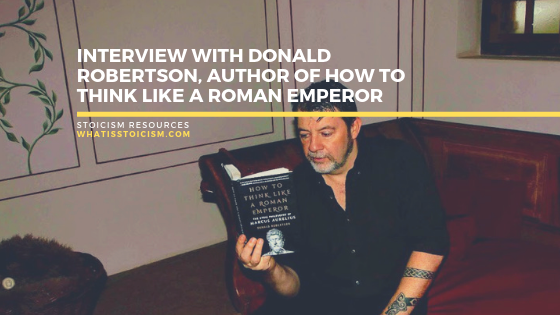 If you have an interest in Stoicism, you’ll know the names of the most famous ancient Stoics – Marcus Aurelius, Seneca The Younger, and Epictetus. If you enjoy the modern take on the works of these great philosophers, then you’ll perhaps also know the likes of Ryan Holiday, Tim Ferriss and Donald Robertson, who have all written and spoke at great length about the benefits of Stoic philosophy in recent years.

That’s why it was great for me, as a student of Stoicism, to be able to interview Donald Robertson recently and get his insight on some interesting topics related to the philosophy. Donald is a writer and trainer, who specialises in teaching evidence-based psychological skills, and is known as an expert on the relationship between modern cognitive-behavioural therapy (CBT) and classical Greek and Roman philosophy.

He is also the author of a number of books, including The Philosophy of Cognitive-Behavioural Therapy, Stoicism and the Art of Happiness, and, most recently, the excellent How To Think Like a Roman Emperor.

With all that said, here’s my interview with Donald Robertson!

Although Stoicism seems to be growing in popularity, how would you recommend introducing it to those who may benefit from its ideas but who have little interest in philosophy?

What I’ve found is that a much wider audience of people are attracted to Stoic philosophy when it’s presented as a form of psychological self-help and also when it’s presented through the use of stories.  In the past, most of the books on Stoicism were written by university professors, academics specializing in classical philosophy. However, increasingly it’s books in the self-improvement genre that are being published and they’re reaching many more people.  In the ancient world, philosophy was taught through lectures, dialogues, and letters or essays. However, it was also taught through the use of anecdotes about famous philosophers. Everyone knows the story, for instance, about Diogenes the Cynic being asked by Alexander the Great whether he could do anything for him and replying that all he wanted was for Alexander to step aside as he was blocking the sun.  We all find these stories more memorable than philosophical arguments and they also reach a different audience, including children and young adults.

Does CBT ever directly reference Stoicism? Or do the modern techniques tend to be more effective without providing background on their origins?

Albert Ellis was the founder of Rational Emotive Behaviour Therapy (REBT), one of the main precursors (or earliest incarnations) of cognitive-behavioural therapy (CBT).  Ellis had read the Stoics and repeatedly said that they were among the main philosophical influences upon his approach. He drew upon many Stoic concepts and practices in his clinical work with therapy clients, and often refers to Stoicism in his books.  At the outset of their course of REBT sessions, during their initial orientation to the treatment, Ellis taught the majority of his therapy clients the famous quote from Epictetus: “It’s not things that upset us but our judgements about things” (Encheiridion, 5).  I don’t think Ellis would have often mentioned Stoicism to his clients by name except perhaps when introducing them to that quote but he certainly taught them many Stoic-influenced ideas during their REBT sessions together.  Many (perhaps most) subsequent CBT practitioners also mention that Epictetus quote to their clients because it happens to neatly encapsulate the central theory of CBT, known as the “cognitive model of emotion”, a premise shared by Stoicism and CBT that says that our emotions are largely (if not exclusively) determined by certain underlying beliefs.  However, rather surprisingly, most CBT practitioners don’t explicitly discuss Stoicism with their clients and indeed very few of them would know much more about Stoicism or its influence upon the development of their own approach than that quotation.

I think that there are pros and cons to mentioning Stoicism in therapy sessions.  It may be inappropriate for the therapist to encourage clients to adopt specific moral values and Stoicism is a moral philosophy with its own set of underlying values and worldview.  However, where a client expresses interest in Stoicism, it may be appropriate for the therapist to discuss it with them and provide them with more information on the philosophy. Moreover, I believe that when people embrace Stoicism it gives them a framework for psychological self-improvement that goes way beyond the scope of ordinary CBT.  Psychotherapy is inherently remedial, by definition. It’s a treatment for an existing problem. Stoicism sometimes served that purpose as well, such as in the consolation letters of Seneca, which address melancholy following bereavement, and so on. However, for the most part Stoicism is actually preventative rather than remedial and as everyone knows: prevention is better than cure.  So I believe that it has great potential as a preventative, or resilience-building, psychological approach, consistent with CBT, but much more fundamental and ambitious in scope.

By the time a lot of people find Stoicism, it provides an awakening of sorts – that they need to “re-program”. Adopting Stoic practices is an ongoing process and certainly not a “hack”, but do you have any advice for people who struggle to find peace of mind from concepts like the dichotomy of control?

Yes, Stoicism is so much more than a lifehack.  My advice to people is that they should read the Stoics first and then review what they felt about everything they read in order to pinpoint the aspects most appealing to them.  Begin working on the ideas to which you can relate and build on that foundation. If the dichotomy of control doesn’t appeal to you at first don’t worry. Focus on the parts of Stoicism that do resonate with you and come back to the other bits later.  In my first book on Stoicism, The Philosophy of Cognitive-Behavioural Therapy (2010), I listed all the psychological strategies I could identify in Stoicism following a rigorous survey of the available texts.  There were about eighteen distinct psychological strategies in total discussed in that book.  And each of those strategies can take a number of different forms when it comes down to the level of specific techniques.  So there are plenty of Stoic tools from which to choose, such as the View from Above, contemplation of death, impermanence, contemplation of the Sage, objective representation, and so on.  (These are all described in my books on the subject and you’ll find them in some of the modern books on Stoicism, although surprisingly very often most of them are ignored by modern authors.)

The biggest misconception I see about Stoicism is that its practitioners want to be completely emotionless and passive (perhaps confused with lower case stoicism). Do you encounter any other common misconceptions that turn people off the philosophy?

The tendency for people to confuse Stoicism, the Greek philosophy, with stoicism, the “stiff upper lip” coping style, is the source of most of the misinformation that you’ll find on the Internet, unfortunately.  The most common misconceptions, as you say, are that Stoics are unemotional, like a robot, or that they’re passive, like doormats. These are completely false impressions concerning the philosophy, of course, which need to be corrected.  Another misconception, although perhaps less common, is that Stoicism was somehow an elitist philosophy for powerful Romans. That’s nonsense, historically, as Stoicism was embraced by people from many different walks of life throughout its five century long history.  Zeno, the founder of Stoicism, was a wealthy merchant at first but he reputedly lost his fortune at sea in a shipwreck and ended up living as a foreign immigrant in Athens, reduced to the state of a penniless beggar sleeping rough on the streets. Cleanthes, his successor as the head of the Stoa, was a former boxer who performed what was considered a very menial job, watering gardens for a living for a pittance of a wage.  Later, during the Roman imperial era, the most famous of all Stoic teachers, of course, was Epictetus, a crippled slave who earned his freedom later in life but still lived in relative poverty. Seneca and Marcus Aurelius were certainly powerful Romans from a privileged class, but many other Stoics came from more humble backgrounds. Another misconception is that Stoicism is a sort of individualistic philosophy, which focuses on self-discipline but ignores our relationships with other people.  That’s completely absurd, though. Stoicism was actually the main forerunner of early Christian ethics, with its emphasis on loving one’s neighbor and the brotherhood of man, etc. Throughout The Meditations of Marcus Aurelius, the main overarching theme is the importance of overcoming our sense of alienation from the rest of mankind by exercising wisdom, justice, and other social virtues, in our relations with others both individually and collectively. Love, or “natural affection” (philostorgia), is actually the foundation of Stoic ethics and as Marcus puts it using this Greek word,  the Stoic wise man may be free from unhealthy passions but he is nevertheless full of love.

Your book How To Think Like A Roman Emperor is a great insight into the life of Marcus Aurelius and his relationship with Stoicism. Aside from your own, which book on Stoicism would you recommend in each of these categories of readers – beginner, intermediate, and advanced?

Beginner.  How to be a Stoic by Massimo Pigliucci.

For me, one of the most powerful ideas from Stoic philosophy is that of value judgements – how an event is only good or bad if we think it to be so. In How To Think Like A Roman Emperor, you talk about some practical cognitive distancing exercises that can help people see a value judgement for what it is. Are there any of these exercises you find yourself turning to more than others when faced with a problem?

Are you planning on writing more books on the Stoics? (How To Think Like A Former Slave, perhaps? 🙂 )

I’ve just started work on a graphic novel about the life and Stoic philosophy of Marcus Aurelius for a major publisher, although it might be a year or two before that hits the shelves.

Thanks for taking the time to answer these questions, Donald. A slightly open-ended question to finish off – in terms of what the philosophy means to you, what is Stoicism?

Stoicism is a philosophy, which literally means “love of wisdom” — it’s a methodology, that is, for seeking practical wisdom in life.  That requires working through some basic philosophical insights but also training ourselves in corresponding psychological practices.  It’s a world view and set of moral values, which are designed to be consistent with reason and also happen to be beneficial for our emotional wellbeing.