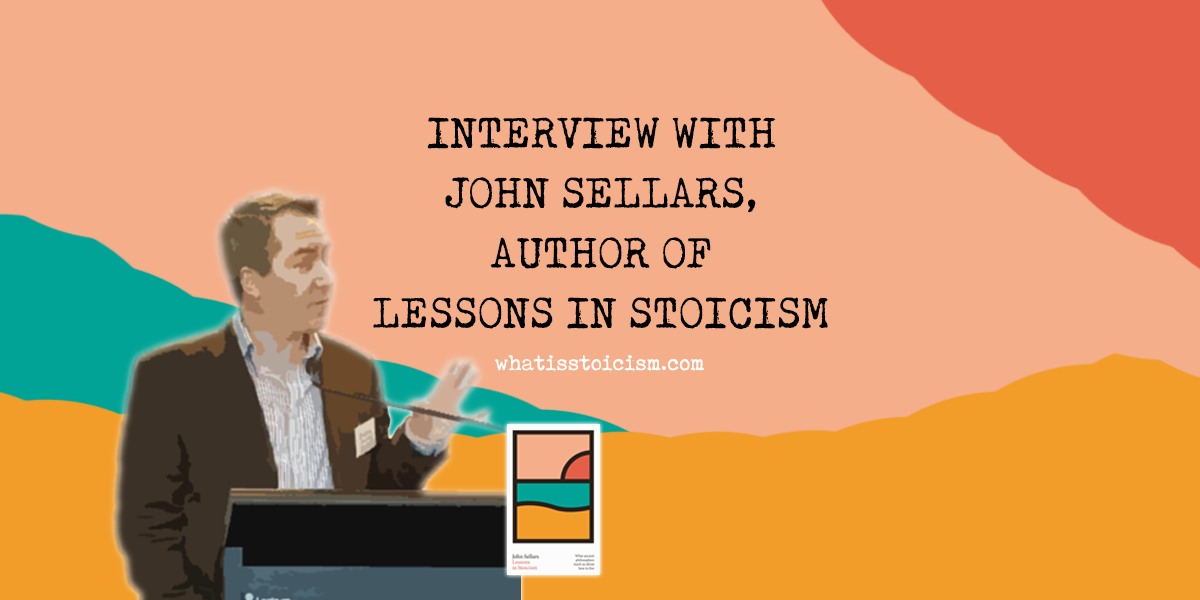 John Sellars first developed an interest in Stoicism while studying philosophy at university. A journey of discovery through Greek philosophy led him to the likes of Plato and Socrates, and eventually the Stoic philosophers Epictetus and Marcus Aurelius. Now he is an academic lecturing in philosophy, the author of books like Stoicism and The Art of Living, and one of the founder members of the Stoicism Today project.

It was great to be able to interview John recently and get his insights on Stoicism, as well as discuss his latest book, the widely praised Lessons in Stoicism. Enjoy!

It feels like Stoicism is gaining in popularity but perhaps that’s a biased view from someone actively seeking out content on the subject! Have you noticed an increased interest in the philosophy in your position as an academic?

Yes, there’s been a huge increase in popular interest over the past decade or so. There were a few people interested back in the 1990s and early 2000s, such as Erik Wiegardt and other folk involved in The College of Stoic Philosophers, but there were only really a small handful of books approaching Stoicism as a guide to life. I suppose the big breakthrough book was William Irvine’s A Guide to the Good Life in 2009, and then we started doing Stoic Week, on a small scale in 2012, and then bigger each year since 2013. Quite a few new books have appeared in the last year or so, and more and more people are discovering it for the first time, so the interest seems to be still growing.

But from the perspective of being an academic, I think things look quite different. There was a real flourish of interest in Hellenistic philosophy in the last decades of the twentieth century, which seems now to has passed its peak. Younger scholars who I see coming up have for the most part reverted back to working on Plato and Aristotle, and this is reflected in the recent issues of ancient philosophy journals. All the interest in Stoicism at the moment is coming from the wider public, and not so much from academic circles. At least that’s my impression.

You’ve indicated in previous interviews that you don’t necessarily ‘practice Stoicism’ – is that still the case? Do you adopt principles from any other philosophy in your daily life?

This is one of those slightly awkward questions that people often ask me and that I rarely answer properly. I’m certainly more of a Stoic than anything else and my academic work on Stoicism certainly goes hand in hand with a belief that philosophy ought to inform people’s lives. I’ve usually resisted saying ‘I’m a Stoic’ for a number of reasons. First, I’m not looking for a label to adopt or a belief system to embrace wholeheartedly or uncritically. I didn’t have a religious upbringing and was always a bit suspicious of religious belief; I think that has made me a bit suspicious of committing to a label. Second, as an academic philosopher I’ve been educated in an environment where everyone questions everything; beliefs are things people challenge, not adopt. The culture is often one of finding reasons not to believe in something rather than reasons to embrace it. Third, there will of course be some bits of ancient Stoicism that I might not find convincing. I certainly don’t believe in divine providence, for instance. I know some people think that’s a fundamental Stoic doctrine, although I don’t think it’s as important as some people have claimed. So, in some respects you could say that I’m a modern secular Stoic, more or less in tune with Massimo Pigliucci’s approach. Where I might differ from Massimo a bit, though this is a minor detail, is that I don’t think we need to draw a sharp distinction between ancient and modern Stoicism. The ancient tradition was pretty fluid: Boethus of Sidon, for instance, denied pantheism, yet remained a Stoic. No one kicked him out! A fourth reason to be cautious of the label is that sometimes it’s taken to imply that the person has in some sense cracked it. To say ‘I’m a Stoic’ might be taken to be equivalent to ‘I’m a sage’, and I’m certainly not one of them!

I’ve also, to be honest, been a bit wary of the idea of ‘practising Stoicism’. I certainly don’t have any regular daily routines. Stoicism is not a series of practices that you do; it’s a way of thinking. It’s not something you practice for a few minutes and then forget about for the rest of the day. It’s about changing the way you look at and interact with the world that shapes everything you do. I know lots of people these days talk about ‘Stoic practices’ similar to the way in which people talk about, say, ‘mindfulness practice’, and I also know that via Stoic Week we probably encouraged this a lot! The sorts of things they tend to have in mind might better be called ‘training exercises’. They are techniques to help digest key Stoic ideas that can be very useful. Real Stoic practice would be consistently acting virtuously. How many of us manage that?

I recently read and enjoyed your latest book Lessons in Stoicism. To you, what makes Stoicism so interesting to write about?

Ultimately it must be because I think it has something valuable to offer, both to myself and to others. My first couple of books were typical academic books and I hardly expected them to find a large audience. I was writing, in a sense, for myself, because I enjoyed the process and gained something from learning about this material. One of the amazing things about doing Stoic Week over the past six or seven years is the number of people I’ve met who have said their lives have been transformed by encountering Stoicism. It can and does have a real impact on some people’s lives. Lessons in Stoicism (in the USA it will come out as The Pocket Stoic) was my first attempt to write a book for a wide, non-academic audience, the only goal being to try to share these ideas with as many people as possible, with the hope that they will find them beneficial.

There are other ways in which it’s so interesting to write about too. The three famous Roman Stoics are all a great pleasure to read and work on, while I also enjoy the rummaging around in the fragments of the early Stoics and the sort of scholarly detective work one has to do to try to piece all the evidence together.

Are you planning to write more books on Stoicism?

I’m just in the process of finishing off a book on Marcus Aurelius. It’s an overview of his philosophy, looking at all the key themes in logic, physics, and ethics. If it has a thesis, it’s aim is to show that Marcus was very much an orthodox Stoic, perhaps engaging more with the early Athenian Stoics than is usually supposed; he wasn’t just writing a diary after being lent a copy of Epictetus. There’s much more going on in the Meditations than that, I think, and I’ll try to show that.

I’ve got a couple of other projects not on Stoicism, including a short book on Epicureanism, and hopefully something on the Renaissance. But after those it would be good to come back to another Stoic project, so long as I can avoid repeating myself.

If you had to name a single “Lesson in Stoicism” as the most important, what would it be?

That’s a really difficult question! I’d be inclined to say that it would be to see ourselves as parts of something larger, which we cannot control, and which is indifferent to our preferences. This touches on Epictetus’s remarks about what’s up to us, and Seneca’s reflections on adversity, as well as Marcus’s cosmic perspective. The world doesn’t revolve around me and doesn’t care about my desires, and why should it. I’m just a small part of something much larger, Nature, and there’s no point fighting against Nature, because it will always win. Instead I have to accept – indeed embrace – my place within the larger system.

Which other modern books on Stoicism are your favourites?

There was no one modern book that had a big impact on me early on. I started reading Epictetus and Marcus. I should mention Pierre Hadot’s Philosophy as a Way of Life, although it covers much more than Stoicism. Of more recent books I’ve read, I do benefit from reading Donald Robertson’s work. Donald and I have collaborated on Stoic Week for a while now, although we don’t see each other physically very often, so it was great to catch up recently at Stoicon in Athens. The reason why I find his work so helpful is because he is writing from a very different perspective from my own. With his psychotherapeutic background, he sees things and makes connections that just wouldn’t occur to me, coming from an academic perspective.

Thinking more academically, there’s a short book by Johnny Christensen, An Essay on the Unity of Stoic Philosophy, first published in the 1960s but reissued recently, which I like. Sambursky’s Physics of the Stoics, also older, presents Stoic physics in naturalistic terms. More recently (although now 20 years old) Bobzien’s Determinism and Freedom in Stoic Philosophy is very impressive. These are all focused on piecing together the theoretical details of the Stoic worldview.

Thanks for taking the time to answer these questions, John. A slightly open-ended question to finish off – in terms of what the philosophy means to you, what is Stoicism?

Picking up on one of my earlier comments, I think it’s about understanding our place in Nature, and our relative insignificance compared to the vastness of Nature. It is, if you like, an antidote to the egotism that we are all prone to from time to time. It turns out that the world doesn’t revolve around us after all, and if we are to live a smooth life, we need to learn to live in harmony with it, rather than expect it to bend to our will.

How James Frey Recovered From A Public Stoning