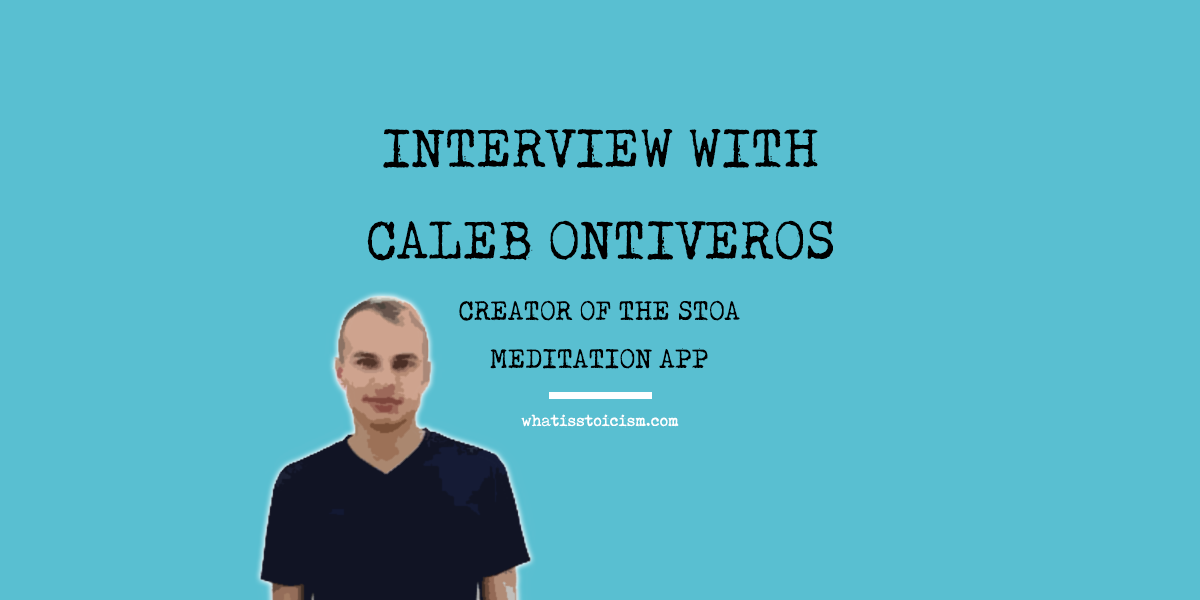 There is a wealth of content to choose from If you’re interested in learning more about Stoicism and benefiting from the philosophy’s principles. From books to courses to podcasts to videos, you can also take your pick of the medium you consume that content from. But did you know there’s also now an app for that?

Stoa is a Stoic meditation and journal app that combines the practical philosophy of Stoicism with mindfulness meditation and Cognitive Behavioural Therapy. The app’s creator is Caleb Ontiveros and it was great to be able to interview him recently and get some insight into the benefits of Stoa.

Hi Caleb, as a former philosophy student, what was it about Stoicism that caused you to focus on it over other philosophies?

Ultimately, the writings of philosophers like Marcus Aurelius. The Meditations express a serious and vigilant attempt at determining how to live well in the world. As Marcus and other Stoics emphasized, we only get one shot at this, so it’s important to get it right.

Other philosophies are valuable in their own way, but Stoicism is an especially actionable philosophy with deep insights into the human condition and psychology. This makes it a powerful life philosophy.

How would you describe the benefits of Stoa to someone unfamiliar with Stoic philosophy?

Stoa is about using the best ancient teachings and contemporary techniques for building resilience. It focuses on perfecting our beliefs, desires, and actions to in order to live better lives.

Unlike other guided meditation programs, Stoa revolves around the philosophy of Stoicism. The advantage of this is that you get to inhabit a complete life philosophy, one adopted by people from all walks of life from emperors, students, investors, philosophers, and more.

Why is it important to have a life philosophy? Because it’s one thing to be resilient, it’s another to live a purpose filled and meaningful life. You need both and Stoicism is one of the best frameworks for achieving that.

What led you to create Stoa and can you share how long the process took from inception to launch?

I created Stoa because it is something I wanted to exist. I began meditating ten years ago and learned a lot from guided programs and apps. Nearly two years ago, I realized that I would love to use a guided program to enhance my Stoic practice.

I wrote the initial courses in 2018, built the first version of the app early 2019 (with entirely new material). I left my last job over the summer, experimented with a number of different startup ideas and on a whim decided to test if people thought Stoa was providing a valuable enough service to justify spending more time on it. Turns out, quite a few people did! So I moved more of my attention to it in August and just launched Stoa outside of the Stoic community earlier this month.

Over the past few months, I’ve added a journal, added hours of new meditations, collaborated with Massimo Pigliucci, and began a series of conversations with experts.

The Theory section of Stoa contains interviews with some great experts. Which modern Stoics do you feel are producing the most insightful content?

Though not living, Pierre Hadot has had an enormous positive influence on contemporary Stoicism. Influencing authors like Donald Robertson, Massimo Pigliucci, and Ryan Holiday.

There are a number of thinkers on the Modern Stoicism team who do fantastic work — do check them out if you haven’t already.

Michael Trembley will likely continue producing interesting academic and practical work. I was glad to get a chance to talk to him for the Stoa conversations.

Perhaps a premature question, but do you have plans for more Stoic projects beyond Stoa or does it have your full focus for now?

I write on Stoicism and meditation, in addition to working on the Stoa app. I just launched a new blog, subscribe if you’d like to follow my writings there!

I cover ancient philosophy to contemporary psychology. Both the theory and practice, with an emphasis on practice.

Aside from Stoic meditation, what other Stoic ‘practices’ have you adopted?

One practice I’m always working on is applying the Stoic disciplines to each domain of my life. Take programming or running for example. You can focus on whether your judgements are true, whether you’re desiring what is under your control, and whether you’re acting with virtue. This three part focus on belief, desire, and action is better summarized by Marcus Aurelius than me:

Do you have any other mindfulness practices?

I’m continuing to focus on mindfulness meditation in addition to Stoic practices like the view from above and praemeditatio malorum. By focusing on the breath or sensations in the body, you’re able to build up focus and nonjudgemental awareness, two states that are important to bring to other areas of your life. Focusing on what matters and avoiding distractions, whether they’re internal or external, strikes me as one of the most essential skills today.

Thanks for taking the time to answer these questions, Caleb. A slightly open-ended question to finish off – in terms of what the philosophy means to you, what is Stoicism?

The idea of antifragility was what got me hooked on Stoicism. This simple idea that you can use stressors to improve, rather than just things to survive.

This is captured in Marcus Aurelius’ well known line:
The impediment to action advances action. What stands in the way becomes the way.

When someone asks, what Stoicism is, I start there. Then I move to the Stoic disciplines and the importance of virtue.