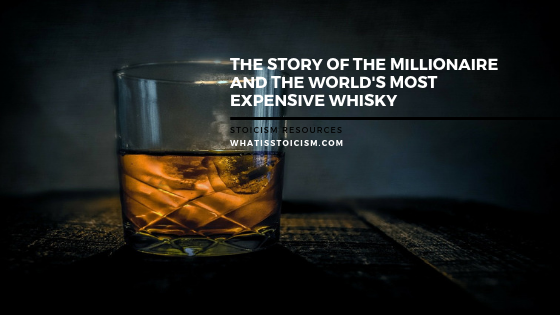 When Chinese author Zhang Wei paid £7,600 to drink the world’s most expensive dram of whisky, he said, “In a nutshell, it tasted good. I was drinking not so much the whisky but a lot of history.” 139 years of history to be exact.

Or so he thought.

It was July 2017 when Mr. Zhang ordered his record-breaking beverage, a small glass from an unopened bottle of 1878 Macallan single malt, at the Waldhaus Am See hotel in Switzerland.

As one of China’s highest-earning online writers and someone who, by his own admission, loves to drink, his purchase didn’t require much thought. “I was in Switzerland and saw a 100-year-old whisky. I didn’t spend long weighing up whether to get it,” he wrote on his Weibo account afterwards.

The price may seem pretty crazy but the whisky market is a pretty crazy place. Based on a few factors, like the age (how long the whisky spent in the cask), bottling date, and distillation year, some bottles are worth huge amounts of money. According to experts Rare Whisky 101, who maintain various indices on market performance, the values are only increasing. The Icon 100 index for example has gone up over 500% in ten years.

And it was Rare Whisky 101 who were called in when doubts were raised shortly after Zhang Wei’s drink of 1878 Macallan. The Waldhaus hotel decided to send a sample of the vintage whisky to the Scottish specialists for testing after its authenticity was questioned by experts.

What came back was surprising.

RW101 concluded that the single malt, believed to be over a century old, had likely not been distilled before 1970. The world’s most expensive dram was a fake.

In his book Sapiens, Yuval Noah Harari describes an “imagined reality” as “something that everyone believes in, and as long as this communal belief persists, the imagined reality exerts force in the world.”Money, for example, couldn’t exist as a means of currency if no humans believed in it. The same goes for the value of whisky and other collectables — a story of value is created that is accepted by enough people and a market is born.

Such a story was alluring enough for Zhang Wei to believe he was buying history. Although £7,600 isn’t much to the man who has held the title as the richest internet author on China’s Rich Internet Author List for over 10 years, he was later given a full refund by the Waldhaus. So nothing lost in the end, other than perhaps the perception that history can be bought and drank.

Seeing A Thing For What It Is

Without a story, without an imagined reality, things can be seen for what they are. Whisky is an alcoholic liquid made from fermented grain mash. Detaching from the story is one Stoic way to curb the desire to indulge in luxury and avoid expensive impulse purchases.

And in sexual intercourse that it is no more than the friction of a membrane and a spurt of mucus ejected.

How good these perceptions are at getting to the heart of the real thing and penetrating through it, so you can see it for what it is!

This should be your practice throughout all your life: when things have such a plausible appearance, show them naked, see their shoddiness, strip away their own boastful account of themselves.

How to Keep a Stoic Journal – 7 Days of Example Entries