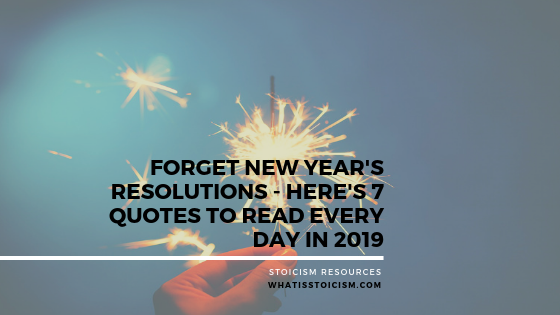 I’ve never been one for New Year’s resolutions. The first day, the first month, the year incrementing by one – none of these things have ever held any weight for me. I’ve always thought Epictetus’s forcefully direct question to be apt – “How long are you going to wait before you demand the best for yourself?” Why wait until 1st January if you want to make changes?

According to a YouGov poll, the most common New Year’s resolutions for 2019 are –

They’re all good goals, so why waste any time before starting?

Nonetheless, you might be approaching the end of the December and feel like you need a challenge to commit to in the new year but aren’t sure what it should be. Why not start with something simple – reading the same useful quotes, some passed down through the ages, every day in order to provoke a positive shift in mindset.

Usually I would favour.something with much more tangible results. As Peter Drucker said, “what gets measured gets managed”, but a shift in thinking, an improvement in attitude, is hard to measure. And shifts in thinking take practice – daily practice.

Of course if you need something to mark down, you can just cross the day off on the calendar after you’ve read the quotes. Keep crossing them off each day and keep the run going. Don’t like the quotes? Change them for your own ones that promote a mindset change you’re eager to make.

So if you don’t have your own, here are the quotes I want to read going in 2019 along with their Stoic equivalents. Print them out and stick them somewhere, add to them, change them – do whatever suits you and good luck for 2019!

“The longer we dwell on our misfortunes, the greater is their power to harm us.” – Voltaire

Equivalent Stoic quote: “If you are distressed by anything external, the pain is not due to the thing itself, but to your estimate of it; and this you have the power to revoke at any moment.” – Marcus Aurelius

In other words: Be fatalistic towards the past. That failure you had last week? You can’t do anything about it now. Focus your energy on moving forward in a positive way.

“He owed his foresight of the horror that was to come to the visits of the black dog.” – Winston Churchill

Equivalent Stoic quote: “He robs present ills of their power who has perceived their coming beforehand.” – Seneca The Younger

In other words: Practice negative visualisation. Give some thought to the bad things that could happen in order to prevent them or reduce their impact. But don’t obsess over them.

“If you aren’t in the moment, you are either looking forward to uncertainty, or back to pain and regret.” – Jim Carrey

Equivalent Stoic quote: “True happiness is to enjoy the present, without anxious dependence upon the future, not to amuse ourselves with either hopes or fears but to rest satisfied with what we have, which is sufficient, for he that is so wants nothing.” – Seneca The Younger

“Only a fool learns from his own mistakes. The wise man learns from the mistakes of others.” – Otto von Bismarck

Equivalent Stoic quote: “The uneducated person blames others for their failures; those who have just begun to be instructed blame themselves; those whose learning is complete blame neither others nor themselves.” – Epictetus

In other words: Observe. Don’t just look – see. In every mistake, in every failure, there is a lesson. Observer others to learn the lesson without feeling the impact of the mistake.

Equivalent Stoic quote: “If it is not right, do not do it, if it is not true, do not say it.” – Marcus Aurelius

In other words: If it feels like you shouldn’t do something then you probably shouldn’t, and you’ll regret it later. Always choose lasting fulfillment over instant gratification.

“If the painter wishes to see beauties that charm him, it lies within his power to create them; and if he wishes to see monstrosities that are frightful, buffoonish, or ridiculous, or pitiable, he can be lord thereof.” – Leonardo da Vinci

Equivalent Stoic quote: “Our life is what our thoughts make it.” – Marcus Aurelius

In other words: The majority of the time we have the ability to choose how we see things. With that being the case, why would we ever choose negativity?

“Don’t outsource self-esteem. Too often we give it to others.” – James Altucher

Equivalent Stoic quote: “’It never ceases to amaze me: we all love ourselves more than other people, but care more about their opinion than our own.” – Marcus Aurelius

In other words: Don’t depend on someone else for validation, don’t give that power to others. Please yourself by living by your own code, by sticking to your own principles.

How To Reconnect: Strategies For Dealing With Depression

Interview With Scott Perry, Difference Maker At Creative On Purpose