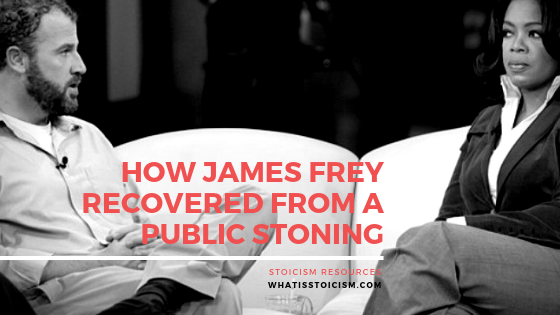 When the book A Million Little Pieces was published in 2003, it was a huge milestone of vindication for author James Frey. He had spent the previous twelve years in France trying to become a writer. He could now finally say he was one. But it wasn’t getting published that made him feel like he had succeeded — it was, after many failed attempts, writing a book that he knew was good enough.

“I typed the last word… and I looked at it and I burst into tears. I just sat alone in the middle of the night by myself and cried for half an hour just because I felt like I’d wrote a book that I didn’t have to throw away.”

It may have been this Stoic attitude of judging success on your own terms (as Epictetus said, “No man is free who is not master of himself”) that helped Frey survive the unexpected firestorm that his book would later create.

Originally marketed as a memoir, A Million Little Pieces tells the story of James Frey’s battles with alcohol and drug addiction, and his time in a rehabilitation centre. Despite being written with little punctuation, no chapter titles, no paragraph indentations and generally breaking most accepted grammar rules, the visceral accounts of Frey’s experiences kept readers turning the pages.

Some were critical of the writing style, but by September 2005 the book had caught the eye of Oprah Winfrey who picked A Million Little Pieces as an Oprah’s Book Club selection and interviewed Frey on her show. The national attention allowed it to reach a whole new audience. It went on to become Amazon’s number one paperback non-fiction book as well as topping the New York Times Best Seller list. The increased attention, however, also meant increased scrutiny.

Early doubts on the veracity of parts of the memoir grew louder, and accusations of fabrication came to a head in January 2006 when The Smoking Gun published an exposé article, the tone of which is effectively summed up in this excerpt:

The 36-year-old author, these documents and interviews show, wholly fabricated or wildly embellished details of his purported criminal career, jail terms, and status as an outlaw “wanted in three states.”

from The Smoking Gun article A Million Little Lies

Many were outraged at the revelations, and chief among them was Oprah Winfrey. Immediately inviting Frey back onto her show she took him to task and accused him of betraying millions of readers. Her public calling-out of Frey served to vilify him in some quarters and he was suddenly seeing his defining work, as well as his reputation, being dismantled.

It wasn’t until five years later that Frey’s thoughts about his Oprah experience became clear. Speaking again to Oprah herself in 2011, he revealed he had never watched the 2006 interview, preferring to leave it in the past. An ancient Stoic would endorse this approach, adopting a fatalistic attitude to the past and favouring a greater focus on the present in order to get through difficult times.

And focusing on the present is exactly what James Frey was doing after his 2006 Oprah appearance, as he revealed in the 2011 interview:

Although he left 2006 in the past, Frey didn’t want to forget what he learned about his own resilience. He commissioned artist Ed Ruscha to produce a painting featuring the words “public stoning” which he hung in his home as a constant reminder that he made it out the other side of such adversity.

While Frey’s adversity was self-admittedly self-inflicted, his resilience through the fallout is still to be admired. And while many would have wilted under the intense scrutiny, after getting past the initial furore, Frey was able to Stoically accept his fate.

If the author’s reputation had been damaged by his public shaming, it wasn’t reflected in the sales of the book which continued unabated. The controversy may even have increased its appeal. Despite the arguments over how the book should be classified — fiction or nonfiction, novel or memoir — its quality as a reading experience couldn’t be denied.

And a reading experience it is. The reader experiences everything from the pain of horrific dental procedures to the satiation of hot meals. Physical sensations felt through words. Whether picking up a novel or a memoir, a reader wants to feel something, and there’s plenty to feel in A Million Little Pieces.

Wherever you stand on the dishonesty committed in the original marketing of the book as a fully truthful memoir, its positive impact for addicts can’t be ignored. In their later conversation, Oprah would tell Frey:

“The book did do what you wanted it to do. It did make people who had been in addictive situations, drugs or alcohol, feel like there was hope for them.”

The Stoic themes that develop when looking at Frey’s handling of the unwanted attention he received are no coincidence. He is fully aware of the philosophy and told Elizabeth Day as much on the How to Fail podcast –

“I believe in a couple of different philosophies that are sort of tied together. One of them is Taoism, based on the Tao Te Ching, the ancient Chinese book of philosophy by Lao Tzu . And I believe very much in Stoicism. They both say sort of say the same thing, which is if you can remove your ego from a process, there really isn’t any difference between success and failure.”

from How to Fail With Elizabeth Day

But does life mirror art in this respect (if not others) in A Million Little Pieces? Do the “sort of tied together” Taoism and Stoicism help the James Frey from the book, now marketed as a semi-fictional novel?

The story begins with James at his lowest point as he is admitted to a rehabilitation center to deal with his alcoholism and crack addiction. He is missing teeth, has a broken nose and is in horrifically bad health. In rehab he is forced to deal with his addictions directly. Instead of running from sobriety, he must now go towards it. As Marcus Aurelius wrote, “What stands in the way, becomes the way.”

To fix his wrecked mouth he must undergo excruciating root-canal surgery, but being a patient at a drug treatment center he must endure it without anesthesia. When the dentist asks James if he can deal with the pain, he replies “I’ve been through worse.” And that’s hard to argue with. Coming from the absolute bottom, from unimaginable suffering and darkness, any fear-setting or negative visualisation done by Frey thereafter would surely always answer the question “what’s the worst that could happen here?” with an honest “nothing worse than I’ve already lived through.”

As his journey progresses, as he fights hard and gets healthier, James starts to appreciate the simple pleasures in life. One of his roommates in the clinic plays the clarinet, which he comes to enjoy and in one instance the music speaks to him, reminding him to embrace his fate:

The Stoic influences may be subtle for the Million Little Pieces James Frey, but the Taoist influences are more direct. After his brother gifts him the Tao Te Ching, a fundamental text for Taoism, James is surprised at how much it resonates with him.

James battles on. He gets sober, he gets healthy, he makes friends, he gains new perspectives through Stoic attitudes and Taoist learning. His progress from all these positive outcomes combined is summarised in his thoughts on fear:

“What do I do? Fear is only fear. I already know that nothing can hurt me more than I have already hurt myself. I know there is no pain that I cannot endure. I know that by holding on each moment each hour each day the days add up each week each month if I hold on I will be fine. I know I am strong. I know I am strong enough to confront what I fear and I know I am strong enough to hold on until the fear goes away. I believe this in my heart. I laugh. I laugh out loud. The answers to my questions are simple if I allow them to be simple. They are all in my lap I just need to look. down. I am scared of everything. I am scared because I allow myself to be scared. There is nothing that should scare me. I laugh out loud because it is so simple. I shouldn’t be scared of anything. I am not scared of anything. Simple as that. Not one fucking thing.”

A Million Little Pieces may not have been a 100% true-to-life memoir, but it helped addicts who could relate. Redemptive stories are inspiring. It may not have been a 100% fictional novel, but it told a compelling story. The author benefited from Stoicism and Taoism during his troubles, the character did too. It is a memoir and it’s not at all, it is a novel but not at all. It is all the same, take it and let it be.