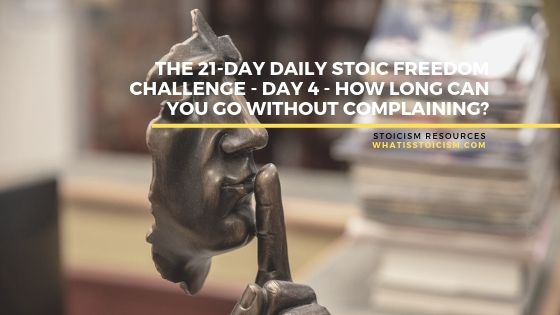 This is an account of day 4 of the 21-Day Daily Stoic Freedom Challenge, for accounts of other days please click here.

The task for day 4 of the 21-Day Daily Stoic Freedom Challenge is to see how long you can go without complaining. The point is that it’s usually more productive to look inward, not outward. As Epictetus advised, there are things we can control and things we cannot – complaining about what is outside our control is wasted time. And time is our most valuable commodity as it’s constantly slipping away.

Reading Meditations, would you suspect Marcus Aurelius was living amid such misfortune and terror?

While there is a somber tone to Meditations, it’s pretty remarkable that this private diary does not include a single specific gripe. He names no names. He whines about nothing. He points no fingers and indulges in no self-pity. He had plenty to complain about—and had he, we could probably understand it—but clearly he made a major commitment to hold his tongue. “Don’t be overheard complaining,” Marcus wrote. “Not even to yourself.”

Today, we make that same commitment. No complaining, no criticizing, no whining, no excuses!

The email goes on to suggest ways to remind yourself not to complain:

It can be a bracelet. It could be a rubberband. It could be a tally with a sharpie on the inside of your wrist. It could be that you drop down and do 5 pushups whenever you catch yourself complaining. But decide on something so that you can stay mindful of this sneakily destructive behavior and not just free yourself from this life-shortening habit, but hopefully replace it with a more positive outlook that will help you broaden and build an even more robust life for yourself.

Today’s task references an old post by Tim Ferriss I read quite a while ago but had since forgotten. The gist of the post is to go 21 days without complaining and to wear a bracelet or rubber band on your wrist for accountability. Every time you catch yourself complaining, you switch the bracelet to the opposite wrist and start again from day 0.

The most useful part of that post for me is how Tim defines “complaining” in order to make the challenge more specific and understandable:

“I defined “complaining” for myself as follows: describing an event or person negatively without indicating next steps to fix the problem. I later added the usual 4-letter words and other common profanity as complaint qualifiers, which forced me to reword, thus forcing awareness and more precise thinking.”

So, this is a complaint:

“Man, I went into the post office and had to stand behind this rude jerk for 30 minutes. What a waste of time.”

Whereas this is not:

“Man, I went into the post office and had to stand behind this rude guy for 30 minutes. It was a waste of time. From now on, I’ll go in the mornings before 10am to avoid the crowd.”

This definition really helped me with today’s task as the impulse to complain often gets acted upon too quickly to prevent it. This way, when I made a complaint I was forced to add a productive or positive spin on the end to “neutralise” it. I’ve adopted the rubber band for accountability and will try to keep it going for the rest of the challenge. I may need other reminders like the one I made below to keep myself on track though:

In the challenge’s group Slack channel, another participant, Christy, summarised the practice of reshaping complaints and problems into empathy and solutions perfectly:

Love this one! And thank you for sharing. I am an avid listener of Tim Ferris’s also. I supervise a large number people at work and hear constant complaints, but no solutions. I will be part of the solution and not engage in complaining, but yet empathy and solutions. In my organisation today there is a lot of uncertainty so people are nervous – instead of being upset its more about empathising with what they are feeling and turning that into a good conversation about what can be done rather feeling defeated and pessimistic. Those with a good work ethic and sense of solution will rise to the top.

Throwing a complaint out with no suggestions on how to fix the problem is lazy and, I think, if done enough, guides the mind to think negatively more often. It’s a dangerous loop – negative thinking leads to complaints leads to negative thinking. Trying to offer solutions to complaints trains the mind in a positive way, and I hope the added reminder of the rubber band helps with this.