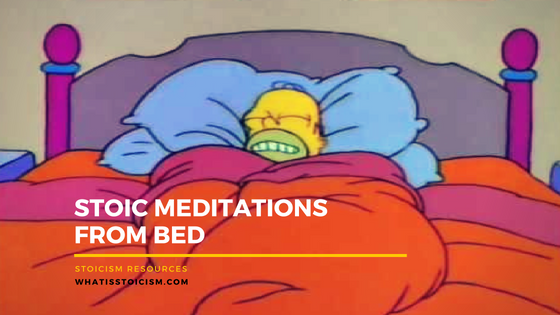 Ah there it is, my alarm clock alerting me to the beginning of another day. The same shrill tone and urgent rhythm normally precedes fire damage which I find symbolic some days.

Not this day that has just begun at 6:00 AM. I’m ready to explode out of bed, strap my Stoic helmet round my brain and let life’s thought bullets deflect off me. I’m ready to Amor my Fati and Memento my Mori.

One thing though. It’s cold outside. And warm in bed. I’ve encountered the day’s first obstacle and this is will require some thought. But it’s all good, I remember reading Marcus Aurelius’s Stoic meditation about this exact conundrum from 2000 years ago.

At dawn, when you have trouble getting out of bed, tell yourself: “I have to go to work — as a human being. What do I have to complain of, if I’m going to do what I was born for — the things I was brought into the world to do? Or is this what I was created for? To huddle under the blankets and stay warm?

That doesn’t seem conclusive enough, does he want me to answer? Maybe this is what I was created for. Manufacturing advances over the last two millennia have changed the game for blanket huddlers, after all.

Marcus might’ve had a different opinion on the work of a human being if he’d known the joy of being a human wrapped warmly in a duvet on a memory foam mattress like a big, toasty cinnamon bun. I’m just here doing no-one any harm, and by proxy that definitely means I’m making the world a better place. Yes, this requires some thought.

After some thought I realise I can work through the five Stoic techniques from here anyway, is that not a triumph of efficiency?

What if I get out of bed, attempt to make a harmless cup of coffee, and get scalded by sipping too early, incapacitated by dropping the ceramic cup on my bare foot, or worse, get mentally demoralised if there’s no coffee left? I can prevent all that by staying in bed. Good, next.

I’m denying myself basically everything in life by lying here, what could be more Stoic than that? This is easy.

I’m ready to forget about that alarm that went off fifteen minutes ago, it’s in the past now, it can’t hurt me anymore. Yeah, that’s fatalism.

I can’t immediately control how cold it is on the other side of this duvet but I can control my reaction, which is to remain safely cocooned in this soft bag of feathers.

Well, the sun hasn’t even come up and I have Stoic’d the life out of this day already, I’m taking that as good progress!

But I’ve forgotten one other Stoic principle which now threatens my horizontality. One of the most prevalent ones. D’oh. Seneca even described it as the motto of the Stoic school — “living according to Nature.”

After eight hours asleep, Nature is now calling; screaming actually. I get up and make my way to the bathroom. Now I’m ready to start the day. Ah, it’s 6:30 AM, that’s a little better than yesterday at least.

Homer (Simpson, not the Greek Poet, author of The Odyssey)