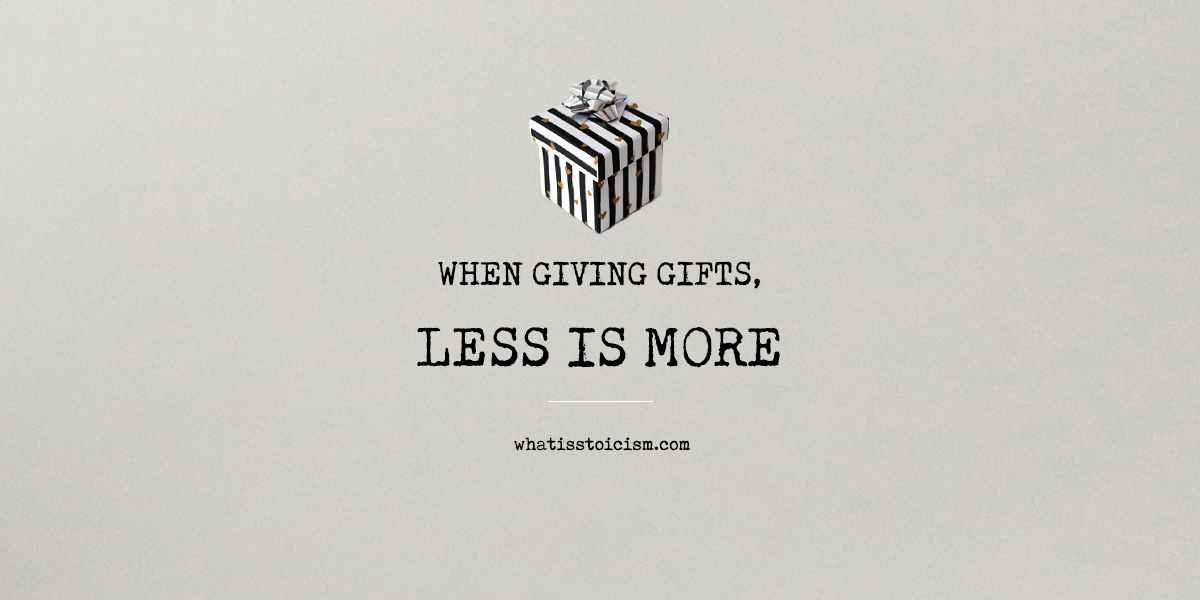 The older I get, the less I seem to enjoy receiving material gifts.

It isn’t that I’m not grateful, but more that I prefer smaller, more meaningful gifts to costly clutter. It’s a difficult thing to express to givers, however, without seeming ungrateful. It’s difficult not to offend when the overall message is “You should’ve saved your money.”

The other difficulty is that this attitude colours my judgement when giving gifts to others.

I might give a well-thought out gift that has some personal meaning, or at least some functional use, but it’s hard to know if the recipient would have preferred something more expensive, flashy, on trend. Maybe they’re silently cursing me for not spending on them what they did on me.

When it comes to younger relatives, I’d rather provide learning in the form of books, educational toys, and outdoor activities, than empty consumption in the form of sugary treats and computer games. (Not to completely disregard the problem-solving value of some games!).

Of course, I love seeing the joy in eyes that have just looked at that shiny new thing they’ve been desiring for a while. But in short order it becomes obvious that it’s an empty joy. It’s a joy that lives only until the next desire is formed.

The clothing, the gadgets, the junk food, they all occupy a conveyor belt that doesn’t stop. When the old one drops off the belt, a newer version appears at the other end. The life span of each version is short.

I don’t want to give gifts that fizzle away to nothing, worthless in a week.

Why would I when things exist that retain their satisfaction indefinitely? And, what’s even better, is that they are ironically the things that cost little or nothing.

Does more money spent on a gift mean more love? Or is it more revealing how much time was spent on it? Time, that most precious resource, the one that once it’s gone can’t be got back.

In giving gifts like this your character is revealed and remembered. People might not “get it”, but if this is who you want to be then it doesn’t matter. If this is the philosophy you want to embody, then own it.

Whether people follow your lead and approach gift giving the same way is out of your control. All you can do is set the example.

If they don’t follow, at least you tried your best. At least you were trying to do something sincere for the common good. If they don’t understand your motivations at first, be patient.

Eventually they’ll see why you gave those gifts, that less was in fact more.