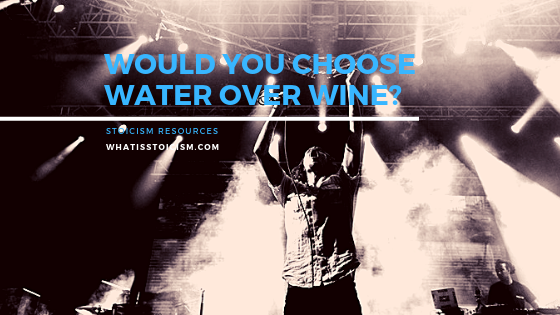 Recently I heard a song that I hadn’t listened to in years.

I make the distinction between heard and listened because this time the song moved me in a way it never did before. It’s easy to listen to something without really processing it, it’s more difficult to hear it and thereby digest it.

The song was Drive by Incubus, and it was first released in 1999, when I was probably too young to appreciate its depth.

What I hear in singer Brandon Boyd’s lyrics now I instantly recognise as Stoicism.

In the first verse and the pre-chorus, Boyd longs to take control of his life instead of letting fear dictate his actions. As Seneca said (Letters 13.4), “We are more often frightened than hurt; and we suffer more from imagination than from reality.” A certain amount of fear can be important for sensing impending danger, but often the things feared don’t come to pass.

If fear isn’t in control then we are, and Boyd begins to realise this –

Sometimes I feel the fear of uncertainty stinging clear

And I, I can’t help but ask myself

How much I let the fear take the wheel and steer

And it seems to have a vague, haunting mass appeal

The chorus of Drive is classic Amor Fati – the love of fate. It defiantly says bring tomorrow on, regardless of what is has to offer. Whatever happens, I will accept it, even love it.

The weightlifter and modern-day Stoic Jerzy Gregorek has a mantra that goes, “Hard choices, easy life. Easy choices, hard life.” Another modern-day Stoic, Tim Ferriss, has a line that makes a similar point – “What we fear doing most is usually what we most need to do.”

In other words, always taking the easy path will rarely lead us to the rewards we seek. We won’t be living the life we want to be living. In Verse 2 of Drive, Boyd articulates the dilemma of these decisions in a beautifully simple way – as a choice between water and wine –

So if I decide to waiver my chance

To be one of the hive

Will I choose water over wine

And hold my own and drive?

By the second pre-chorus, Boyd has just about convinced himself that he needs to take the wheel and be the driver of his own life. “No man is free who is not master of himself,” said Epictetus. Here, Boyd is ready for freedom –

And it seems to be the way, that everyone else gets around

Beginning to find that when I drive myself, my light is found

The final bridge turns the focus on the listener (or hopefully the hearer?) and is the perfect place for me to stop my commentary and turn it over to you, the reader –

Would you choose water over wine?

Hold the wheel and drive.

Four Stoic Questions To Ask When You’ve Been Criticised