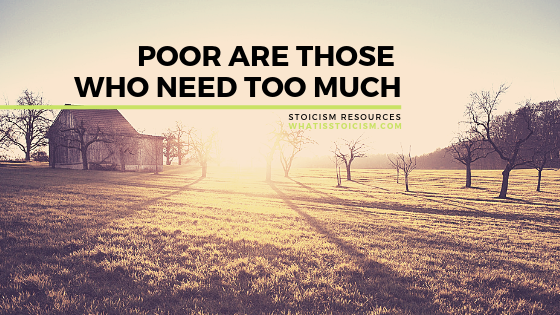 In his Consolation to Helvia, Seneca The Younger posits the following: “Is it not madness and the wildest lunacy to desire so much when you can hold so little?”

He goes on to say how unwise it is “to think that it is the amount of money and not the state of mind that matters!”

This is just one example of the Stoic attitude to wealth and the accumulation of possessions.

In A Guide to the Good Life, William B. Irvine describes this attitude – the forgoing of luxurious living – by saying:

Irvine goes on to say that even though he doesn’t pursue wealth, a Stoic might nevertheless acquire it. A Stoic will, after all, do what he can to make himself useful to his fellow humans and as a result may be well rewarded.

Someone who found themself in this position quite recently was Jose Mujica. After becoming president of Uruguay in 2010, he shunned his newfound wealth and donated 90 percent of his $12,000 monthly salary to charities benefiting poor people and small entrepreneurs.

He doesn’t explicitly identify as a Stoic, but Mujica, in the words of Irvine, made himself useful to his fellows humans.

His salary bump wasn’t the only thing he shunned. Mujica also declined to live in the Uruguayan presidential palace or to use its staff, preferring to continue living with his wife on their farm, guarded only by two police officers and their three-legged dog, Manuela.

Mujica’s austere lifestyle was admired by many and the media have often referred to him as either the “world’s humblest head of state” or “the world’s poorest president.”

Even if Mujica’s political ideals don’t align with your own, it’s difficult not to admire his way of life and his principles, which could certainly be deemed Stoic.

It may surprise those unfamiliar with Uruguayan politics (like myself), that the placid-seeming old farmer had an eventful time as a member of an armed guerrilla group in his younger days.

Without wishing to get into the weeds of the political climate at that time, suffice it to say that in the early 1970s, Mujica was captured by the government and imprisoned. Held under military custody in squalid conditions, he spent a total of 13 years in captivity.

Speaking in a 2014 interview on how that experience shaped his overall philosophy of living, Mujica said:

“I slept for many years on a prison floor, and the nights I got a mattress, I was happy. I survived with barely nothing. So I started giving great importance to the small things in life and to the limits of things. If I dedicate myself to having a lot of things, I will have to spend a great part of my life taking care of them. And I won’t have time left to spend it on the things I like – in my case, politics.

So living light is no sacrifice for me – it’s an affirmation of freedom, of having the greatest amount of time available for what motivates me. It’s the price of my individual freedom. I’m richer this way.”

When his time as president came to an end in 2015 (despite his popularity, Uruguayan presidents can only serve one term), Mujica became a senator. He held that post until August 2018, before resigning and rejecting the state pension. At the age of 83, he then returned (or continued) to work on his farm.

I can’t help but enjoy drawing a parallel between Jose Mujica and Lucius Quinctius Cincinnatus. Cincinnatus’s career has been much embellished by legend, but it still shows how much admiration people have for civic virtue, humility, and modesty.

Encyclopedia Britannica gives the following summary of the legend of Cincinnatus:

“The core of the tradition holds that in 458 Cincinnatus was appointed dictator of Rome in order to rescue a consular army that was surrounded by the Aequi on Mount Algidus. At the time of his appointment he was working a small farm. He is said to have defeated the enemy in a single day and celebrated a triumph in Rome. Cincinnatus maintained his authority only long enough to bring Rome through the emergency. He then resigned and returned to his farm.”

No desire for reward or fame. Just a desire to help the people, and a humble farm to happily return to. Jose Mujica and Cincinnatus.

To finish, a quote from the world’s poorest president that could have come straight from the mouth of Seneca himself:

When Giving Gifts, Less Is More