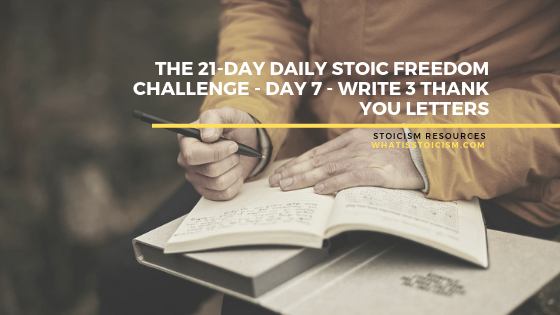 This is an account of day 7 of the 21-Day Daily Stoic Freedom Challenge, for accounts of other days please click here.

The task for day 7 of the 21-Day Daily Stoic Freedom Challenge is to write three thank you letters. The intention is that the act of gratitude will have a positive effect on both the sender and the recipient of the thank you letter. Although Marcus Aurelius practised gratitude in the Meditations by acknowledging the people who had most influenced him, the writings were only for himself. Today’s task is to go a step further than Marcus by letting those responsible feel the gratitude we’re expressing.

Today we’re taking a step back and getting a complete view. How often do we take meaningful time to stop and see? To think deeply about how we get to where we are—both literally and metaphorically—and appreciate those who helped us get there?

Your assignment today is to sit down and write 3 Thank You letters. And then send them!

And if there was any doubt about how deep to go with it, the email goes on to clarify:

Use this, the first Sunday of the challenge, to sit down with a pen and paper, and as the great English Romantic poet William Wordsworth said, “Fill your paper with the breathings of your heart.”

I’ve often thought about writing thank you letters in the past. The thought of being grateful to someone and them never truly knowing seems sad to me, but one of the things that has always stopped me is my worry of how it awkward it would be. Maybe the recipient will think there was no need for it, that it was an over-the-top reaction to whatever they’re being thanked for.

Interestingly, that seems to be a common concern. it’s even addressed in today’s Daily Stoic email:

Expressing gratitude improves well-being for both expressers and recipients and we chronically underestimate the power of expressing gratitude and overestimate how awkward it will be. In a series of experiments conducted by researchers from the University of Chicago, people were asked to send a letter to someone in their life, expressing gratitude. While writing the gratitude letters consistently put them in more positive spirits — a finding in keeping with plenty of existing research on the mood-enhancing effects of gratitude — writers consistently misjudged how their letters would land, overestimating awkwardness and underestimating the recipients’ reported mood and surprise at receiving the note. “Writing gratitude letters seems to come at little or no real cost. People were composing these really thoughtful messages in just a matter of minutes,” says study co-author Amit Kumar. “The broader message is that people should express gratitude more often, and precisely how you go about doing that might not matter that much.”

So effectively the first challenge today was to write the letters, the second was to actually have the courage to send them. The first wasn’t a problem but, despite knowing it’s a common concern, I’ll have to really try hard to get past the perceived awkwardness of the second.

So, I have the letters ready to go, which I’m telling myself is enough for today. I just hope it doesn’t take me long to send them, because I don’t feel like doing it right now. As motivation, I need to remember that I’m denying the recipient a positive experience the longer I withhold them.

Checking the challenge’s group Slack channel, it was also motivating to see that some fellow participants, like Julie, weren’t struggling as much as me with today’s task:

Easiest day of the challenge for this handwritten letter enthusiast. Here’s my TEDx talk about it from a couple years ago.

And here’s Julie’s excellent talk, which conveys the impact that a handwritten letter can have:

While I was writing my thank you letters it occurred to me that the people I was addressing already know how I feel about them and how grateful I am to them. I try to show them those feelings through my actions in everyday life. I completed the letters anyway and may still send them, but I also considered that I should pay closer attention in future to people who have a positive impact on my life but aren’t as close to me. If I can remember to thank those people with a letter when they do something for me then I think that’s a worthwhile takeaway from today’s task.

How To Reconnect: Strategies For Dealing With Depression