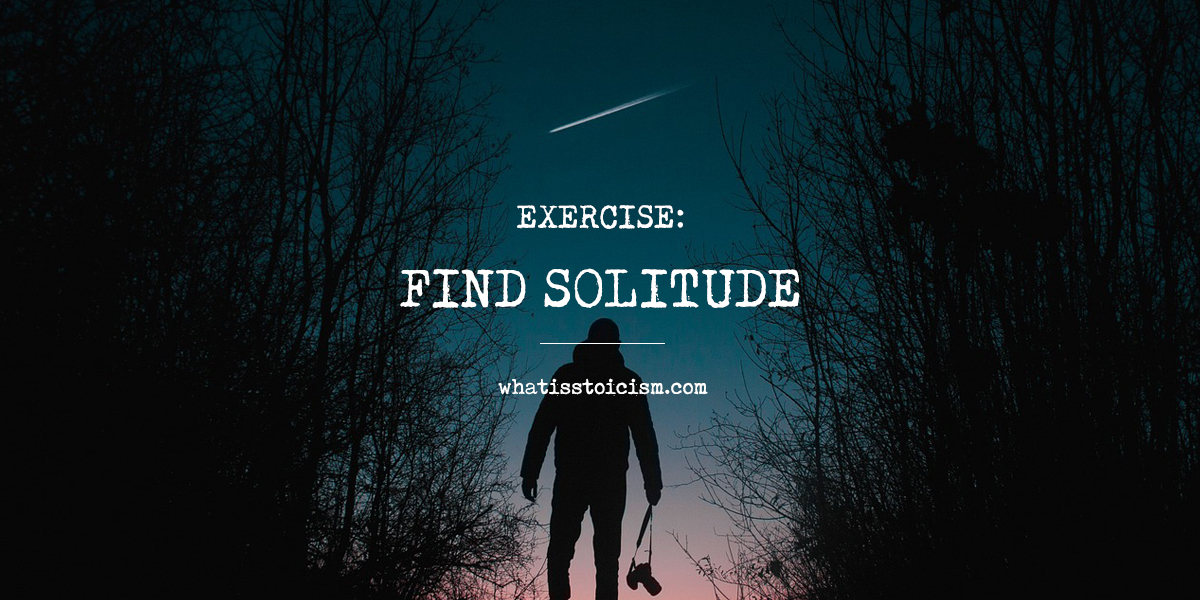 Within you there is a stillness and sanctuary to which you can retreat at any time and be yourself, just as I can. Few people have that capacity and yet everyone could have it.

When he was still involved in the day-to-day operations of Microsoft, Bill Gates had the habit of scheduling an unusual “vacation” twice a year. The breaks were unusual because he would get dropped by helicopter to a secret cabin in the woods and stay there alone for one week. He called this his “Think Week.”

For the solitary seven days, Gates would be unplugged from all technology and cut off from family, friends, and staff. The only human contact he had was with a caretaker who would provide his meals twice a day.

This deliberate isolation allowed the multi-billionaire to read books, industry news, and company reports. The complete lack of distraction meant he could focus only on processing what he was reading and formulating carefully-considered responses where necessary. In particular, Gates could give full attention to new innovations that were being pitched to him and the work done during one Think Week even led to the creation of Internet Explorer in 1995.

In his bestselling book Stillness is the Key, Ryan Holiday writes that we too need to put ourselves in the position to do that kind of deep work. As difficult as it may be, we need to make the time and find somewhere we can think and have quiet and solitude. The responsibilities that we temporarily set aside will be better for our temporary disappearance, Holiday says – we will carry back with us “the stillness from our solitude in the form of patience, understanding, gratitude, and insight.”

Scheduling specific time to increase focus, boost creative thinking, and avoid needless stimuli is a great way to reset. It opens your eyes to your capability to concentrate on a task while blocking out all the other things vying for your attention. Doing this is practice – it improves your ability to do the same thing in your normal day-to-day life. You become better at reflecting on which tasks are important and better at focusing on them to the exclusion of all else.

It may not be practical for you to rent a secret cabin in the woods and disappear for a week, but there are smaller ways you can draw inspiration from Bill Gates’s Think Week and reap the benefits of solitude. Indeed, as Marcus Aurelius wrote in his Meditations (4.3), you don’t need to go very far at all:

People look for retreats for themselves in the country, by the coast, or in the hills. There is nowhere that a person can find a more peaceful and trouble-free retreat than in his own mind…So constantly give yourself this retreat, and renew yourself.

Keep in mind that carving out solitude doesn’t have to mean thinking about work. It can simply be a means to think through personal matters that you’ve been avoiding, to reset, to renew yourself. Getting away from the bustle of daily life even for a few deliberate minutes can be enough to regain a calm perspective on the obstacles you are faced with.

The idea of finding solitude and working or thinking couldn’t be simpler, but here are some tips that can help make it work if you’re not sure how to take the first step:

It might seem like solitude is an extreme measure but it has the great benefit of allowing us to think and act without the added pressure of what other people will think:

Solitude, in itself, does not teach integrity, nor does the countryside give lessons in moderation; but those vices whose object is show and display will subside where no witness or onlooker remains. Who puts on the purple robe when he has no one to show it to? Who serves a single dinner on a golden plate? . . . No one is elegant just for their own benefit, or even for a few close friends; we set out the implements of our vices in proportion to the crowd there to see them. So it is: the stimulus of all our extravagance is the complicit admirer. You will cause us not to desire things if you keep us from showing them off. Ambition and luxury and lack of restraint all need a stage: you will heal them if you are kept from view.

It’s important to remember that, as with most things in life, solitude should be practiced in moderation. Doing it regularly but briefly will mean it retains its value. Too much time alone, too much time in your own head, can be counter-productive, as Seneca warned in his Epistles (10.1):

They say that Crates – a disciple of that Stilpo I mentioned in an earlier letter – when he saw a young man walking by himself, asked him what he was doing there alone. “I am conversing with myself,” he said. To which Crates replied, “Watch out, I beg of you, and listen carefully: you are conversing with a bad man.”. . . No ignorant person should be left alone. That is when they make bad plans and create future troubles, either for others or for themselves; it’s when they organize their ignominious desires. Whatever the mind once concealed, whether from fear or from shame, it now reveals: it sharpens boldness, stimulates lust, goads anger.