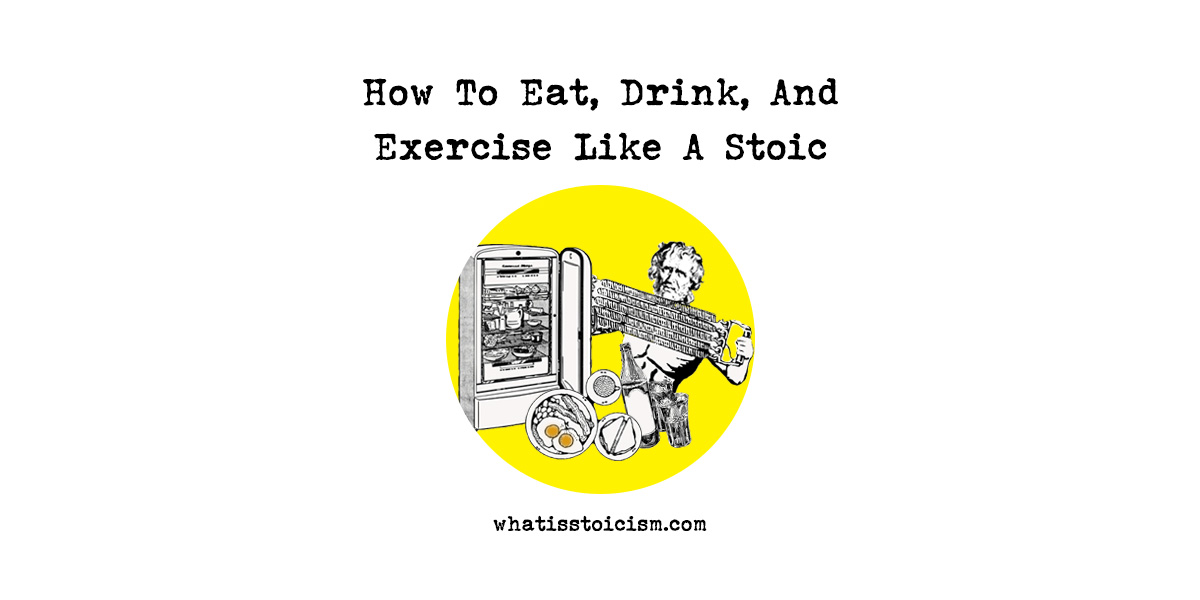 For ancient practitioners of philosophies like Stoicism, the principles they adopted weren’t a set of rough guidelines or a list of quick life hacks.

Their philosophy wasn’t something they dipped in and out of or referenced only in emergencies.

No, for beginner students and philosopher-kings alike, Stoicism was their way of life.

Through the cardinal virtues of Wisdom, Justice, Courage, and Moderation, it informed their decisions every day.

There was no area of life, therefore, to which philosophy could not be applied.

One such area that perhaps gets forgotten in light of modern modalities is the Stoic approach to a healthy lifestyle.

But just as their ancient principles remain popular today due to their continued relevance, there is still a lot we can learn from Stoic advice on eating and exercising.

Here are five Stoic notes on healthy living you can put into practice today.

To sum up the question of food, I maintain that its purpose should be to produce health and strength, that one should for that purpose eat only that which requires no great outlay, and finally that at table one should have regard for a fitting decorum and moderation, and most of all should be superior to the common vices of filth and greedy haste.

The Roman Stoic Musonius Rufus believed that the foundation of the virtue of Moderation lay in self-control in eating and drinking.

He spoke often on the topic, stressing that one should prefer inexpensive food to expensive and what is abundant to what is scarce.

Musonius recommended culinary simplicity through the “natural” nourishment of plants and grains rather than animals. He also explicitly mentioned fruits and vegetables that do not require much cooking, as well as cheese, milk, and honey.

Although the Stoics weren’t strictly vegetarian, they wouldn’t have eaten much meat in general — Musonius viewed it as a “heavy food” that was an obstacle to thinking and reasoning.

The Golden Sayings of Epictetus XXXIV

For the sake of our health, the Stoics argued, we should avoid overeating.

“By overloading the body with food,” wrote Seneca (Letters 15). “You strangle the soul and render it less active.”

To avoid making these mistakes, his advice was to accustom oneself through constant practice to choosing food not for enjoyment but for nourishment, “not to tickle one’s palate but to strengthen one’s body”.

Remember, you must behave as you do at a banquet. Something is passed around and comes to you: reach out your hand politely and take some. It goes by; do not hold it back. It has not arrived yet: do not stretch out your desire out toward it, but wait until it comes to you.

In other words, eating, drinking, and exercising are not necessarily activities that are treated in a specific manner.

There are short and simple exercises which tire the body rapidly, and so save our time; and time is something of which we ought to keep strict account. These exercises are running, brandishing weights, and jumping… Select for practice any one of these, and you will find it plain and easy. But whatever you do, come back soon from body to mind.

It’s common to think of ancient philosophers as merely thinkers; stationary souls who spent most of their time sitting and pondering.

But the fact is the Stoics worked out.

Appropriately fueled by their diet, they exercised enough to improve their fitness and keep the body functioning well.

Just like their approach to eating, however, they applied moderation to exercise and were careful not to overindulge lest they neglect their philosophical pursuits.

The importance the Stoics gave to exercise can also be seen in the various instances where they draw parallels between the art of living and athletics. Epictetus, for example, did this often:

First of all, condemn your own actions, and then, after having condemned them, don’t give up on yourself … You should learn instead from what the wrestling masters do. The boy has taken a fall: ‘Get up,’ he says, ‘and resume the fight until you grow strong.’

We ought to take outdoor walks, to refresh and raise our spirits by deep breathing in the open air.

The second head of the Stoic school, Cleanthes, was a boxer, while Chrysippus, who succeeded him, trained as a long-distance runner.

Despite their inclination to such vigorous activities and the many parallels they drew between philosophy and competitive sports like wrestling, the Stoics still saw the value in gentler movement.

As a means of refreshing and resetting the mind, it’s hard to argue that a simple stroll is any less valuable today than it was to the Stoics two thousand years ago.

You have to submit to discipline, maintain a strict diet, abstain from rich foods, exercise under compulsion at set times in weather hot and cold, refrain from drinking water or wine whenever you want — in short, you have to hand yourself over to your trainer as if he were your doctor.

For the Stoics, the overarching attitude to eating, drinking, and exercising was one of moderation.

But it wasn’t just a means of strengthening the body.

It was ultimately a means of strengthening mental self-mastery by regulating unhealthy desires and reducing dependence on luxuries they might not always have access to.

Not to mention the fact that optimum physical health provides the best platform on which to build optimum mental health.

In today’s world of excess, we need to practice these principles perhaps more than ever.

Indulge the body just so far as suffices for good health. It needs to be treated somewhat strictly to prevent it from being disobedient to the spirit.