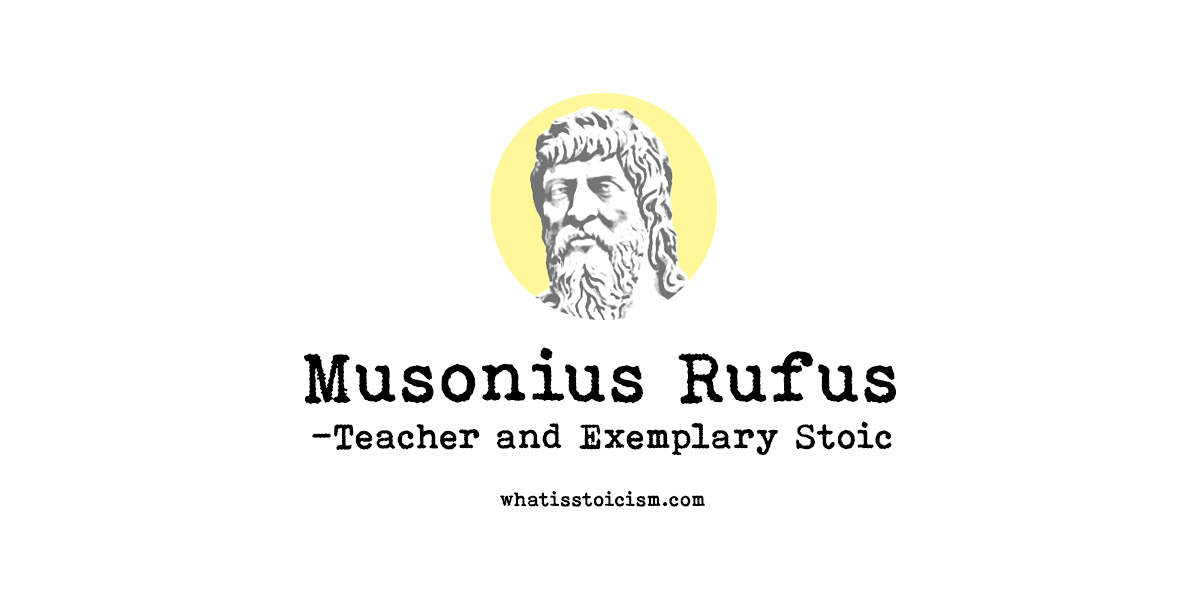 As a teacher in ancient Rome, he instructed well-known philosophers like Epictetus and Dio of Prusa.

Musonius’s reputation as an educator led to him being admired by people from many different philosophies and faiths. Indeed, in his Contra Celsum, the Christian Origen mentions Musonius alongside exemplary figures Heracles, Odysseus, and Socrates when referring to representatives of the best life.

Like his student Epictetus, Musonius left no writing of his own that we know of. We do, however, have a small collection of preserved lectures and fragments that give us an insight into his philosophy.

As Gretchen Reydams-Schils writes in the introduction to Cora Lutz’s That One Should Disdain Hardships, Musonius’s philosophical emphasis was on “ethics in action”:

The strongest version of a Stoic focus on an ethics in action can be found in the views attributed to Musonius Rufus. For him “philosophy is nothing else than to search out by reason what is right and proper and by deeds to put it into practice”

Another characteristic of Musonius’s approach was his tendency to challenge traditional expectations. At a time when such views would not have been conventional, he argued that women deserved an education as much as men and that marriage is not a handicap for the pursuit of philosophy.

Also embedded in the Stoic teacher’s philosophy was the value he placed on the endurance of hard work and hardship. This hardship, he believed, should not be meaningless but should be directed toward virtue:

How much more fitting, then, it is that we stand firm and endure, when we know that we are suffering for some good purpose, either to help our friends or to benefit our city, or to defend our wives and children, or, best and most imperative, to become good and just and self-controlled, a state which no man achieves without hardships. And so it remains for me to say that the man who is unwilling to exert himself almost always convicts himself as unworthy of good, since we gain every good by toil.

Musonius was closely associated with the Stoic Opposition against the tyranny of Emperor Nero. In 60 AD, when Nero banished Rubellius Plautus, Musonius followed him into exile. He returned to Rome following Plautus’ death in 62 AD but was subsequently banished himself in 65 AD amid the fallout from the Pisonian conspiracy.

The location of Musonius’s exile was the desolate island of Gyara. Despite the harsh conditions on the island, he rose to the challenge of his banishment and is believed to have formed a small group of philosophers whom he taught.

In one of his surviving lectures, he affirms his belief that exile is not an evil:

It is not true, moreover, that exiles lack the very necessities of life. To be sure, men who are idle and unresourceful and unable to play the part of a man are generally in want and without resources even when they are in their own country, but energetic and hardworking and intelligent men, no matter where they go, fare well and live without want. We do not feel the lack of many things unless we wish to live luxuriously:

For what do mortals need besides two things only,

The bread of Demeter and a drink of the Water-carrier,

Which are at hand and have been made to nourish us?

Musonius Rufus returned to teach in Rome in 68 AD following Nero’s succession by Galba. In a period of turmoil, Galba was followed by three further emperors in the space of several months. In 69 AD, with Vitellius’s reign coming to an end, Vespasian’s armies marched on Rome. Musonius made brave pleas for peace at this time but was unsuccessful and Vespasian was able to seize power.

Musonius was initially spared exile by Vespasian in 71 AD but was later banished again in 75 AD before returning to Rome once more in 79 AD following Vespasian’s death. It is unclear exactly when Musonius himself died, but due to Pliny’s mention of him in his letters, it is known that he was dead by 101 AD.

A final point to make about Musonius Rufus in this short account of his life is that he appears to have garnered such respect due to his inclination towards action: he practiced what he preached.

Not only did he display virtues like courage and justice by striving for peace at a time of war and challenging conventional attitudes, he also exhibited the self-discipline to shun praise, fame, wealth, luxury, and power when all would have been easily within his grasp.

There is no better summary of his commitment to simple living, and indeed his overall philosophy, than this excerpt from his lecture On Clothing and Shelter:

Since we make houses too for a shelter, I argue that they ought to be made to satisfy bare necessity, to keep out the cold and extreme heat, and to be a protection from the sun and the winds for those who need it. In general, whatever a natural cave would offer, furnishing a moderate shelter for man, this our houses ought to furnish for us, with just enough to spare to make a convenient place for storing away man’s food.

What good are courtyards surrounded by colonnades? What good are all kinds of colored paints? What good are gold-decked rooms? What good are expensive stones, some fitted together on the floor, others inlaid in the walls, some brought from a great distance, and at the greatest expense? Are not all these things superfluous and unnecessary, without which it is possible not only to live but also to be healthy? Are they not the source of constant trouble, and do they not cost great sums of money from which many people might have benefited by public and private charity?

How much more commendable than living a life of luxury it is to help many people. How much nobler than spending money for sticks and stones to spend it on men. How much more profitable than surrounding oneself with a great house to make many friends, the natural result of cheerfully doing good. What would one gain from a large and beautiful house comparable to what he would gain by conferring the benefits of his wealth upon the city and his fellow citizens?

What Is Living In Accordance With Nature?

What Is Amor Fati?