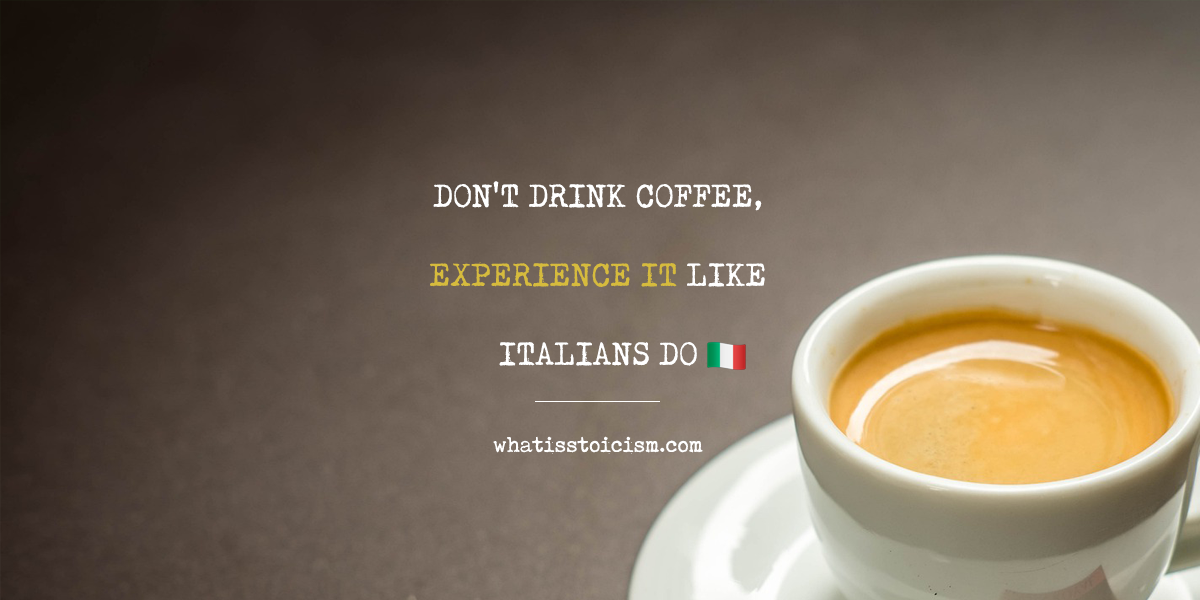 Never drink a cappuccino after 11am. Ask for a latte in a cafe and you’ll get a glass of milk. Just want an espresso? Don’t order an espresso – order a caffè.

Italy’s coffee culture can seem strange to the uninitiated (or just un-Italian). There are rules and traditions that have been developed in the country over many years that make coffee much more than just a beverage. From preparation to consumption it’s a ritual, an experience.

Even after the plants have been carefully grown, the fruits picked, processed, milled, graded and roasted, the beans packaged, purchased, traded and transported, there are many layers of complexity that contribute to a good espresso.

Italians refer to the four M’s:

The output of each M is the input to the next. A lack of discipline to do the right thing at just one of the steps – if the beans aren’t roasted long enough, if the grind is too fine, if the machine hasn’t been cleaned, if the barista gets the dose wrong – can ruin the final product.

The clink of a small ceramic cup on a saucer will end your wait at the bar and signal the delivery of a piping-hot dose of dark indulgence. If Fate is smiling on you, if the 4 M’s have aligned, then the aroma is sweet, the crema is smooth and the coffee is strong.

You lightly move the provided spoon from top to bottom to distribute the flavor. You cleanse your palate with a little water. Now, you lift the tiny handle of the cup with your index finger and thumb, you sip and you savor.

And savor it you must – an espresso in Italy is only 25ml in volume, so you better let the world slow down for a minute. (Maybe that’s why so many Italians visit the espresso bar several times a day.)

But it’s not just the coffee itself that Italians enjoy. Again, it’s about the experience. Standing at the bar for 10 minutes, as is the customary location to consume, it’s the chance for a quick chat with friends. Or it’s the chance to revel in a peaceful moment alone. It’s social or solo, whatever you want.

Another coffee concept Italy has given us is caffè sospeso – suspended coffee. It sounds like a concoction to rival the caffè macchiato or the caffè corretto, but it’s not a type of drink at all. Originating in Naples, it’s the act of paying for two coffees in a cafe and leaving the second one “suspended” so that someone can come along later and get one for free. It’s an anonymous act of kindness, a symbol of social solidarity. It provides someone with a sense of connection they wouldn’t otherwise have expected.

For some, it’s now just part of the process of getting a coffee. This explanation comes from a proponent of the practice featured in the Netflix documentary Coffee for All:

Caffè sospeso has quickly caught on elsewhere – you can even check for participating cafes near you.

So, through vehicle of coffee, there are straightforward ways you might not have thought of to establish social connections, to carve out quiet alone time or to anonymously make someone’s day. Through all the layers of complexity in cultivation, preparation and consumption, there emerges simple, easy pleasure.

If you seek tranquility, do less. Or (more accurately) do what’s essential – what the reason of a social being requires, and in the requisite way. Which brings a double satisfaction: to do less, better.

A lot of time and effort goes into the extraction of a little liquid. On the other hand, a lot of joy and serenity is extracted from the short moment of consumption. As Seneca said, it’s quality rather than quantity that matters in life. We have plenty of time to live as long as we aren’t wasting that time. Life is like a play: it’s not the length, but the excellence of the acting that matters.

So it is with coffee. We can learn from the Italians by savoring the short, simple moments. Whether you’re meeting mates, sipping solo or sharing suspended, it’s not the volume, but the experience and what you make of it that matters.

If you don’t drink coffee, think about your other interests that give you the options of being social, enjoying time to yourself or contributing to others anonymously. It could be as simple as replacing coffee with a different drink or leaving a suspended meal for the car behind you at the drive-thru.

Exercise: Learn To Want What You Have

How To Reclaim Your Innocence