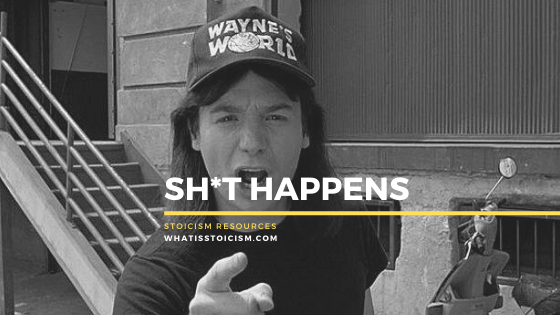 As the phrase goes, sh*t happens. Sometimes it happens to us. Sometimes we have periods when it feels like a lot of sh*t is happening to us at the same time.

In the classic comedy, Wayne’s World, Wayne Campbell experiences one of these periods and laments: “What the hell’s going on? I lost my show, I lost my best friend, I lost my girl. I’m being sh*t on, that’s all, sh*t on, and you know what really pisses me off…” At this point the camera operator appears to lose interest in Wayne’s ranting and pans away from him.

We tend to judge what goes on in our daily lives as either good or bad. We get a promotion or someone gives us a compliment – good. We make a mistake or do something to embarrass ourselves – bad.

If we judge something to be bad enough it can amplify all the other bad things that happen. It can be the first thing we think about after waking, and the last thing before falling asleep. It feels like we’re being sh*t on.

It’s natural, the Stoics said, to instinctively react negatively to a bad event. It’s what we do next that matters. We have the power to choose how we apply value judgements – after our initial reaction, we don’t always need to classify something as good or bad. It isn’t sh*t happening that upsets us, but our judgement that sh*t is happening.

So, lets cut the phrase “sh*t happens” out of our lexicon. It’s only sh*t if we judge it to be sh*t. If we don’t, it’ll be easier to forget it and keep moving forward.

As the camera pans away from Wayne Campbell, he calls it back: “Where are you goin’? OK, come on back. Things aren’t as bad as they seem. I’m sorry, I didn’t mean to dump on you. I’ll figure something out. OK?”

Understanding This Misconception Could Change How You Think About Stoicism