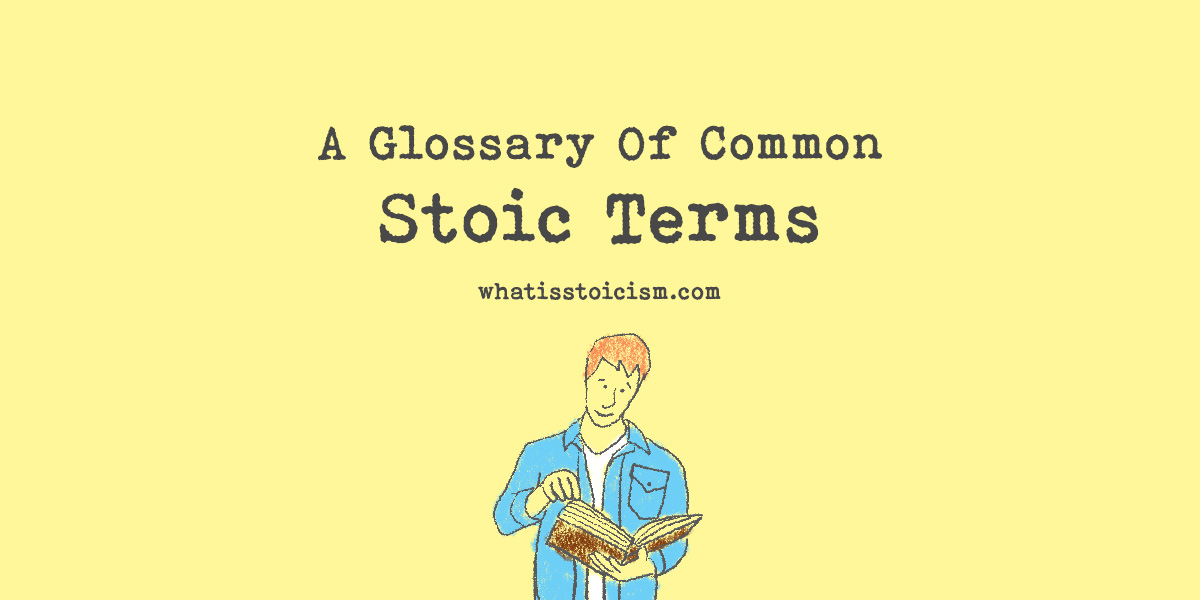 As you read books on Stoicism, you will inevitably encounter some concepts that are referred to by their ancient Greek and Latin terms.

While these authentic Stoicism terms are usually well explained when referenced, it can be easy to forget them or even confuse one with another.

So, with the help of Wikipedia and this useful resource by Enda Harte (otherwise known as The Irish Stoic), here is a glossary of Stoicism terms you can bookmark as a handy reference to ensure you aren’t mixing your apatheias with your eudaimonias!

andreia ανδρεία: the cardinal virtue of courage; the state of the soul which is unmoved by fear; self-restraint in the soul about what is fearful and terrible; boldness in obedience to wisdom.

anthrôpos ἄνθρωπος: human being, used by Epictetus to express an ethical ideal.

apatheia ἀπάθεια: serenity, peace of mind, such as that achieved by the Stoic sage. A state of mind in which one is not disturbed by the passions. It is best translated by the word equanimity rather than indifference.

apoproêgmena ἀποπροηγμένα: dispreferred things. Morally indifferent but naturally undesirable things, such as illness. Opposite of proêgmena.

ataraxia ἀταραξία: tranquillity, untroubled by external things. According to the Stoics, living virtuously in accordance with nature would lead to ataraxia as a byproduct.

autarkeia αὐτάρκεια: the characteristic of self-sufficiency, usually applied to societies, communities, states and their economic systems.

daimôn δαίμων: divine spirit within humans that connects us to universal nature.

diairesis διαίρεσις: analysis, division into parts. Used when distinguishing what is subject to our power of choice from what is not.

dikaiosyne δικαιοσύνε: the cardinal virtue of justice; “consonant with the law and instrumental to a sense of duty” (Diogenes Laertius 7.98).

ekklisis ἔκκλισις: aversion, inclination away from a thing. Opposite of orexis.

ekpyrôsis ἐκπύρωσις: cyclical conflagration of the Universe. (For the most part, a short lived cosmological theory.)

eph’ hêmin ἐφ’ ἡμῖν: what is up to us, what is in our power, e.g. the correct use of impressions.

epistêmê ἐπιστήμη: refers to a principled system of understanding; scientific or certain and true knowledge, over and above that of katalêpsis.

eudaimonia εὐδαιμονία: the state or condition of ‘good spirit’, and which is commonly translated as ‘happiness’ or ‘welfare’.

eupatheia εὐπάθεια: good feeling (as contrasted with pathos), occurring in the Stoic sage who performs correct (virtuous) judgements and actions.

hormê ὁρμή: positive impulse or appetite towards an object (as a result of orexis). Opposite of aphormê.

katalêpsis κατάληψις: clear comprehension and conviction. To the Stoic philosophers, katalepsis was an important premise regarding one’s state of mind as it relates to grasping fundamental philosophical concepts.

kathêkon καθῆκον: duty, appropriate action on the path to Virtue. According to Stoic philosophy, humans (and all living beings) must act in accordance with Nature, which is the primary sense of kathēkon.

logos spermatikos λόγος σπερματικός: the generative principle of the Universe which creates and takes back all things.

oikeiôsis οἰκείωσις: self-ownership and extension. The process of self-awareness in all animals, which in humans leads to a sense of community.

orexis ὄρεξις: desire, inclination towards a thing, Opposite of ekklisis.

paideia παιδεία: training, education. referred to the rearing and education of the ideal member of the ancient Greek polis or state.

palingenesia παλιγγενεσία: periodic renewal of the world associated with ekpyrôsis.

pathos πάθος: passion or emotion, often excessive and based on false judgements.

phantasiai φαντασία: impression, appearance, the way in which something is perceived.

proêgmena προηγμένα: preferred things. Morally indifferent but naturally desirable things, such as health. Opposite of apoproêgmena.

prokoptôn προκόπτων: Stoic disciple. A person making progress. Even though one has not obtained the wisdom of a sage; when appropriate actions are increasingly chosen, fewer and fewer mistakes will be made, and one will be prokoptôn, making progress.

prosochē προσοχή: attitude and practice of attention, mindfulness. State of continuous, vigilant, and unrelenting attentiveness to oneself (prohairesis)

sophrosyne σωφροσύνη: the cardinal virtue of temperance; moderation of the soul concerning the desires and pleasures that normally occur in it; harmony and good discipline in the soul in respect of normal pleasures and pains.

theos θεός: god; associated with the order in the Universe.

tonos τόνος: tension, a principle in Stoic physics causing attraction and repulsion, and also the cause of virtue and vice in the soul.

What Is Amor Fati?