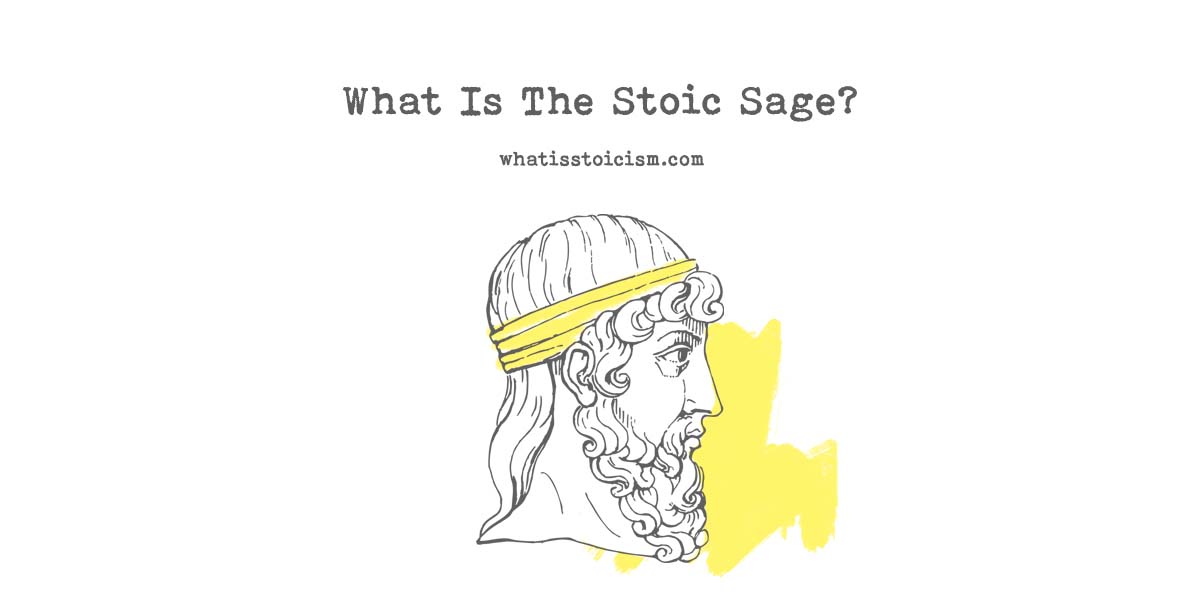 This short explainer will provide you with a straightforward understanding of what the Stoic sage is and how you can use the concept to guide your Stoic practice.

Definition Of The Stoic Sage

The Stoic sage refers to the person who is perfect in their practice of Stoicism. The sage, for example, meets the high Stoic standard of always acting according to virtue. As such, the sage achieves a state of eudaimonia and isn’t susceptible to harm from Fate.

Rather than being a concrete reality that can be reached, however, the Stoic sage was understood to be an inaccessible ideal that one could use for guidance.

The fact that becoming a sage is impossible is not a problem to Stoics. The sage is merely a target to aim at. While Stoics will do their best to adhere to it’s model, they accept that human limitation (the fact that we’ll inevitably fall short at times) makes perfection unattainable. Progress, every day, to get closer and closer to the ideal, is enough.

In his profile of Zeno, the founder of Stoicism, Diogenes Laertius outlines some traits of the sage:

“The wise man is said to be free from vanity; for he is indifferent to good or evil report… the good are genuinely earnest and vigilant for their own improvement, using a manner of life which banishes evil out of sight and makes what good there is in things appear… At the same time they are free from pretence… Nor indeed will the wise man ever feel grief; seeing that grief is irrational contraction of the soul… They are also, it is declared, godlike; for they have a something divine within them.”

In his work On the Happy Life, Seneca stresses the importance of making progress over aiming at perfection:

“I am satisfied, if every day I take away something from my vices and correct my faults. I have not arrived at perfect soundness of mind, indeed, I never shall arrive at it: I compound palliatives rather than remedies for my gout, and am satisfied if it comes at rarer interval—and does not shoot so painfully. Compared with your feet, which are lame, I am a racer. I make this speech, not on my own behalf, for I am steeped in vices of every kind, but on behalf of one who has made some progress in virtue.”

Seneca, On the Happy Life XVII

And in his fifth Moral Letter to Lucilius, Seneca advises finding a balance between the life of a sage and that of an ordinary person:

“Philosophy calls for plain living, but not for penance; and we may perfectly well be plain and neat at the same time. This is the mean of which I approve; our life should observe a happy medium between the ways of a sage and the ways of the world at large; all men should admire it, but they should understand it also.”

How Can I Use The Stoic Sage Right Now?

The very practice of Stoicism is itself the practical application of the theoretical concept of the sage. We are, after all, implicitly trying to get closer to the principles embodied by the Stoic ideal.

However, there is also a useful technique we can use to make this a little less abstract. It comes to us courtesy of Seneca:

“Happy is the man who can make others better, not merely when he is in their company, but even when he is in their thoughts! And happy also is he who can so revere a man as to calm and regulate himself by calling him to mind! One who can so revere another, will soon be himself worthy of reverence. Choose therefore a Cato; or, if Cato seems too severe a model, choose some Laelius, a gentler spirit. Choose a master whose life, conversation, and soul-expressing face have satisfied you; picture him always to yourself as your protector or your pattern. For we must indeed have someone according to whom we may regulate our characters; you can never straighten that which is crooked unless you use a ruler.”

The premise is simple: we are free to select specific role models against whose standards we can judge our own behaviour.

Seneca’s first suggestion was Cato, the philosopher who stubbornly defended the Roman republic, eventually preferring death over being ruled by Julius Caesar. His constant embodiment of Stoic principles could be used, in Seneca’s words, as a ruler to make crooked straight.

Cato, Seneca concedes, may be too severe a model to follow. We’re free of course to choose models from among all the other Stoics. Here are some simple steps we can take to adopt a suitable role model.