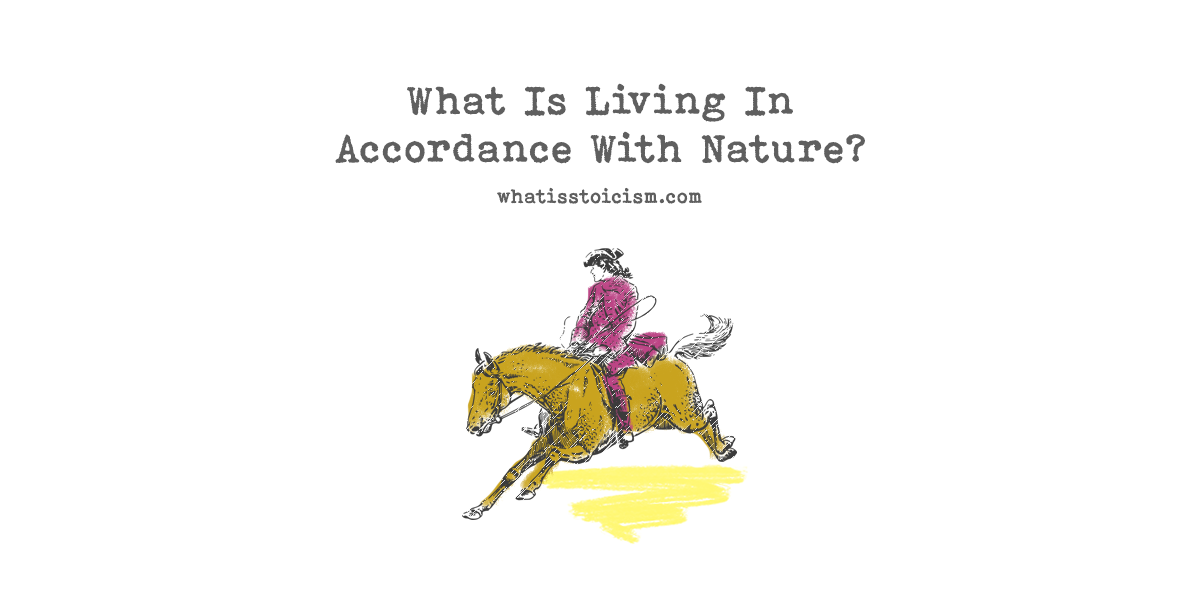 This short explainer will provide you with a straightforward understanding of what the Stoic concept of living in accordance with Nature is and how you can use the concept to guide your Stoic practice.

Definition Of Living In Accordance With Nature

Living in accordance with Nature is one of those Stoic concepts that isn’t initially easy to grasp.

This is understandable; it doesn’t have the immediate practical applications of techniques like the dichotomy of control, negative visualisation, or the reserve clause, nor is it a snappy one-liner from Epictetus or Marcus Aurelius that will change the way you think about life in an instant.

The main reason it is confusing, however, is that the “Nature” being referred to can take on a few different meanings. Stepping through these meanings separately should help clarify things.

The first meaning comes from Stoic physics, which held that Nature (the universe) is a rational and completely ordered system.

Nature works to arrange things in the most rational way and since the world operates through reason, all things are determined and all events fit within its well-structured system. This view of Nature (or the universe) can be thought of in the same terms as Fate.

Living in accordance with Nature in this context means accepting that all events that have occurred were forever fated to occur.

In chapter 8 of his Enchiridion, Epictetus summarises this attitude:  “Demand not that events should happen as you wish; but wish them to happen as they do happen, and you will go on well.”

The second meaning of Nature refers to the natural process by which living things are created, change, and die.

This encompasses vital functions such as nutrition, metabolism, growth, movement, and the many other processes that healthy specimens are naturally subject to.

Living in accordance with Nature in this context simply means a living being is successfully performing these vital functions.

The final meaning of Nature we’ll cover is probably the most commonly used one in modern times. It is also the most useful to us as it refers specifically to the Nature of human beings.

The Stoics believed that we have one unique human capacity that separates us from other animals – the ability to reason.

Our ability to reason enables us to know the logic of what is good, what is bad, and what is indifferent. In other words, we can distinguish virtue and, by acting accordingly, live virtuously.

Living in accordance with Nature in this context therefore means striving to improve our ability to reason through lifelong learning, and thus improving our ability to live virtuously (which is the ultimate goal of Stoicism).

Seneca makes a number of references to Nature in his moral letters to Lucilius.

In his fifth letter, he refers to “living according to Nature” as being the Stoic “motto”:

Our motto, as you know, is “Live according to Nature”; but it is quite contrary to nature to torture the body, to hate unlaboured elegance, to be dirty on purpose, to eat food that is not only plain, but disgusting and forbidding. Just as it is a sign of luxury to seek out dainties, so it is madness to avoid that which is customary and can be purchased at no great price. Philosophy calls for plain living, but not for penance; and we may perfectly well be plain and neat at the same time. This is the mean of which I approve; our life should observe a happy medium between the ways of a sage and the ways of the world at large; all men should admire it, but they should understand it also.

In letter 50, he makes a clear statement on the intrinsic link between Nature and living virtuously:

Virtue is according to nature; vice is opposed to it and hostile.

In a later letter, Seneca asserts that to go against Nature is to make life unnecessarily harder for ourselves:

Let us keep to the way which Nature has mapped out for us, and let us not swerve therefrom. If we follow Nature, all is easy and unobstructed; but if we combat Nature, our life differs not a whit from that of men who row against the current.

One of the best ancient sources we have on living in accordance with Nature is Diogenes Laertius, who offers a comprehensive explanation from a human perspective in book VII of his Lives of the Eminent Philosophers:

An animal’s first impulse, say the Stoics, is to self preservation, because nature from the outset endears it to itself, as Chrysippus affirms in the first book of his work On Ends: his words are, ‘The dearest thing to every animal is its own constitution and its consciousness thereof’; for it was not likely that nature should estrange the living thing from itself or that she should leave the creature she has made without either estrangement from or affection for its own constitution.

We are forced then to conclude that nature in constituting the animal made it near and dear to itself; for so it comes to repel all that is injurious and give free access to all that is serviceable or akin to it.’ For [animals], say the Stoics, Nature’s rule is to follow the direction of impulse. But when reason by way of a more perfect leadership has been bestowed on the beings we call rational, for them life according to reason rightly becomes the natural life. For reason supervenes to shape impulse scientifically.

This is why Zeno was the first (in his treatise On the Nature of Man) to designate as the end ‘life in agreement with nature’ (or living agreeably to nature), which is the same as a virtuous life, virtue being the goal towards which nature guides us. So too Cleanthes in his treatise On Pleasure, as also Posidonius, and Hecato in his work On Ends. Again, living virtuously is equivalent to living in accordance with experience of the actual course of nature, as Chrysippus says in the first book of his De Finibus; for our individual natures are parts of the nature of the whole universe.

And this is why the end may be defined as life in accordance with nature, or, in other words, in accordance with our own human nature as well as that of the universe, a life in which we refrain from every action forbidden by the law common to all things, that is to say, the right reason which pervades all things … Diogenes [of Babylon] then expressly declares the end to be to act with good reason in the selection of what is natural. Archedemus says the end is to live in the performance of all befitting actions.

How Can I Use Living In Accordance With Nature Right Now?

We know the Stoics believed that our ability to reason is what distinguishes our human Nature from the Nature of animals.

Diogenes Laeritus tells us that an animal’s Nature is to follow the direction of impulse. As humans, we know we will inevitably feel impulses and involuntarily form instinctive impressions, but our ability to reason allows us to examine those impulses and decide whether or not to be led by them.

“So make a practice at once of saying to every strong impression: ‘You are but an impression, and not at all what you seem to be.’”

Marcus Aurelius complements this practice with instructions that only a human would be capable of executing (Meditations 8.13):

“Every moment and whenever an impression arises, do your best to be a scientist, a psychologist, and a logician.”

Here is an exercise you can use to ensure you are exercising your uniquely human capacity to reason and thereby living in accordance with Nature.

While animals follow their impulses and instinctive impressions, you’re going to use your reasoning to create a little distance from your impressions and examine them.

By doing this, you will be able to make more considered decisions and avoid the mistakes that inevitably occur as a result of rushed reactions to strong impulses.

The exercise is one of awareness, and begins by recognising the next time you form a harsh initial impression in your mind. This can be an event that immediately seems either very positive or very negative to you.

You may not catch every impression like this initially but with practice you will catch more and more as you become more aware of what you’re doing.

Here is a set of steps to apply reason to your impressions:

What Is The Dichotomy Of Control?