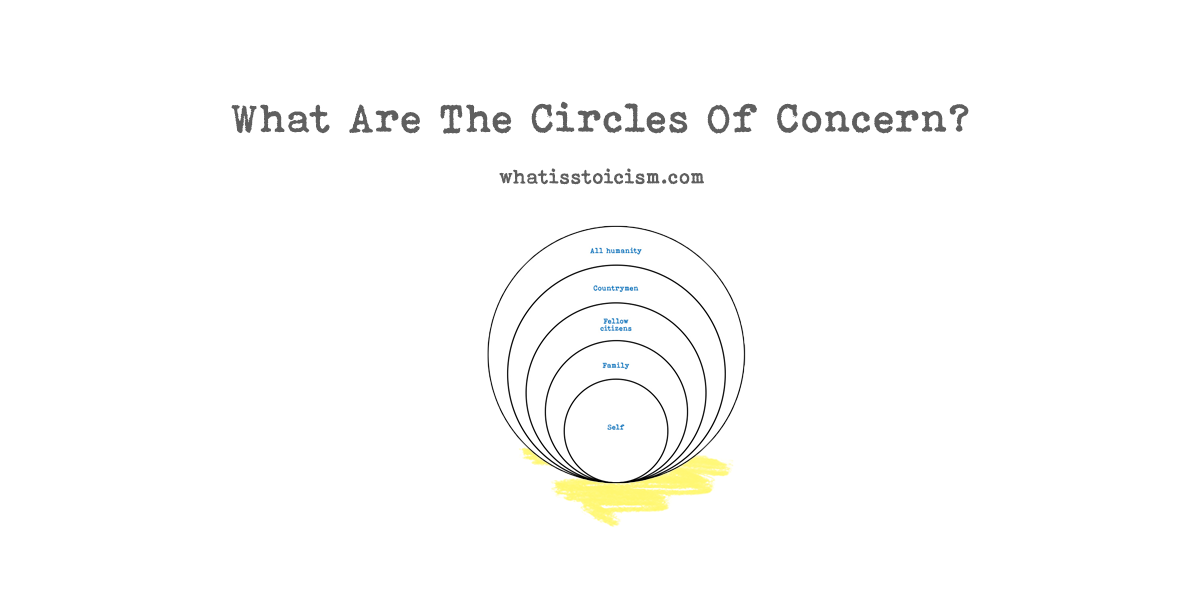 This short explainer will provide you with a straightforward understanding of what the circles of concern are and how you can use them to guide your Stoic practice.

Definition Of The Circles of Concern

The Stoic philosopher Hierocles developed the circles of concern to describe Stoic cosmopolitanism in regard to oikeiôsis.

Cosmopolitanism refers to the idea that all human beings are members of a single community.

Oikeiôsis, at the most basic level, refers to an animal’s natural impulse or inclination toward something which it regards as belonging to it. Hierocles also saw it as the basis for human ethical action.

The diagram below shows Hierocles’ explanation of how humans can extend their oikeiôsis towards other human beings in widening circles and ultimately seek to draw the further circles closer toward ourselves so that we may have greater concern for more and more people.

Hierocles’ surviving work exists only in small fragments so unfortunately we don’t have access to much of his original material.

Thanks to Stobaeus, however, who preserved some of these fragments, we can read exactly what Hierocles said regarding the circles of concern:

“Each of us is, as it were, circumscribed by many circles; some of which are less, but others larger, and some comprehend, but others are comprehended, according to the different and unequal habitudes with respect to each other.

For the first, indeed, and most proximate circle is that which everyone describes about his own mind as a centre, in which circle the body, and whatever is assumed for the sake of the body, are comprehended …

The second from this, and which is at a greater distance from the centre, but comprehends the first circle, is that in which parents, brothers, wife, and children are arranged. The third circle from the centre is that which contains uncles and aunts, grandfathers and grandmothers, and the children of brothers and sisters …

But the outermost and greatest circle, and which comprehends all the other circles, is that of the whole human race … it is the province of him who strives to conduct himself properly in each of these connections to collect, in a certain respect, the circles, as it were, to one centre, and always to endeavour earnestly to transfer himself from the comprehending circles to the several particulars which they comprehend.

It is requisite, likewise, to add a proper measure conformably to the general use of appellations, calling indeed cousins, uncles and aunts, by the name of brothers, fathers and mothers; but of other kindred, to denominate some uncles, others the children of brothers or sisters, and others cousins, according to the difference of age, for the sake of the abundant extension which there is in names. For this mode of appellation will be no obscure indication of our sedulous attention to each of these relatives; and at the same time will incite, and extend us in a greater degree, to the contraction as it were of the above mentioned circles.”

A Modern Update To The Circles Of Concern

“By integrating this circle into your daily practice, you acknowledge your connection to the living Earth, as the environment that necessarily sustains and supports all preceding circles. You provide yourself with the conceptual basis to tackle the environmental crisis and in doing so you align your thoughts with the ancient Stoic understanding that happiness is attained by living according to Nature.”

This adaptation looks as follows:

How Can I Use The Circles Of Concern Right Now?

The circles of concern can be used to inform your attitudes toward the people and the world around you. By showing the extent of concern that Hierocles intended, they can help you practice the Stoic virtue of Justice.

The Stoics stressed that we should endeavor to pull each circle closer toward ourselves and thereby expand both the quality and quantity of our concern. Taking this as an ongoing guide, you might periodically review your efforts relative to each circle. And given we want to focus first on the closer circles, it might make sense to vary the intervals at which we review each circle.

So, for example, starting at the innermost circle and working outward a program of reviews might look something like this:

The reviews themselves don’t have to be lengthy and overwhelming.

From there it should be possible to commit to some small action that pulls the relevant circle closer to you.