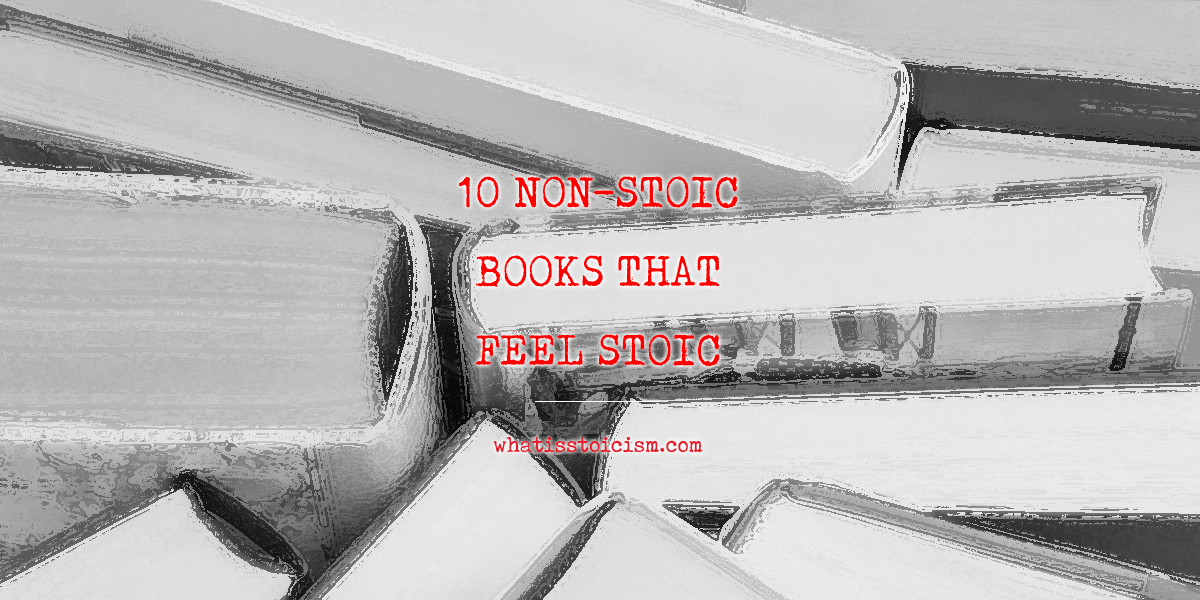 The more you learn about Stoicism, the more you realise the philosophy’s principles are at work in places other than just books by the Stoics or about them.

It becomes easier to spot ideas that are complementary to the Stoic way of life. It even feels appropriate to make the effort to do so given Stoicism itself evolved as a combination of ideas from other philosophies.

Below is a list of ten books I have found impactful and thought-provoking, along with a description of how each aligns with Stoic principles. They are all books I wouldn’t hesitate to recommend to anyone.

The Courage to be Disliked

This is a book that will make you pause for thought at many different points. It takes the form of a dialogue between a philosopher and a youth seeking his advice. The philosopher uses the theories of psychotherapist Alfred Adler in an attempt to change the youth’s perspective on life and help him with his problems.

The youth isn’t always open to the “strong medicine” the philosopher is imparting, and some of his advice can be uncomfortable for the reader too. I think it’s important to remember that the book intends to help people free themselves from past experiences so they can be happy, rather than deny the occurrence of those past experiences.

It’s that freedom, that focus on the present, that makes the book align well with Stoicism. Indeed, the overall theme of having the courage to be yourself even if it means being disliked by some is well summarised by Marcus Aurelius in his Meditations:

The Courage to be Happy

If you read The Courage to be Disliked, then you have to read its sequel. The Courage to be Happy picks up the conversation between the philosopher and the youth and continues to delve into the difficulties of twentieth-century living.

Stoic-approved themes of self-reliance, helping others, and love come to the fore in this book and, as impressed as I was by its predecessor, I found the sequel to be even better.

“Nature bore us related to one another,” said Seneca the Younger. “She instilled in us a mutual love and made us compatible … Let us hold everything in common; we stem from a common source.”

It’s a sentiment the philosopher in The Courage to be Happy seems to agree with:

Similar to the previous two books, Awareness is one that will challenge the way you see the world. The medicine perhaps isn’t as strong, but it’s no less effective.

The prevailing theme is that external events don’t have the power to harm us, it is we who give power to these events through our judgements and thoughts about them. The solution is to be more aware of our conditioning, to challenge it, and to realise that we can change it.

The theme of Awareness couldn’t be more Stoic. It falls almost directly in line with Epictetus’s famous line:

“What really frightens and dismays us is not external events themselves, but the way in which we think about them. It is not things that disturb us, but our interpretation of their significance.”

The Way to Love

If you enjoy the ease with which Anthony de Mello’s writing reads in Awareness, you’ll quickly seek more of it. The Way to Love is the perfect next step.

This time de Mello focuses on the negative impact of our attachment to externals. He even goes so far as to say that almost every negative emotion we experience is the direct outcome of an attachment.

Yet again the Stoic-aligned theme is obvious, as Seneca conveys in his advice to Lucilius on attachment to possessions and luxury:

“You will only learn from such things to crave still greater.”

Jocko Willink is a retired naval officer who has emerged as a popular public figure since becoming a podcaster and author. Together with fellow ex-SEAL Leif Babin, he wrote Extreme Ownership, which teaches lessons in strong leadership.

Willink and Babin use examples from the battlefield and show readers how the same principles they followed in those high-stress environments can be applied to leadership roles in everyday life.

The concept of Extreme Ownership encourages leaders to consistently take ultimate responsibility for their work, even reviewing what they did wrong themselves if a subordinate makes a mistake.

The book contains many nods to Stoic traits that leaders should adopt such as humility, discipline, and accepting fate.

A good leader must be:

Hell Yeah or No

In his review of William B Irvine’s A Guide to the Good Life, Derek Sivers admits that after discovering Stoicism, he realised his own life philosophy matched up with it exactly.

It’s no surprise then that his excellent book Hell Yeah or No contains its fair share of Stoic-inspired musings. A collection of 67 short meditations, the book is presented as “thoughts around what’s worth doing, fixing faulty thinking, and making things happen.”

One of my favourite lines from the book, and one of the most Stoic, talks about how our character is shown through what we do rather than what we say, and how that is always under our control:

“Character isn’t fate or destiny. Character isn’t DNA, decided before birth. Character is the result of your little choices and little actions. How you do anything is how you do everything. It all matters. Your actions are completely under your control, and seem to be the best indicator of future success.”

Choose Yourself draws on James Altucher’s own personal failures to show what can be achieved if we shift our mindset away from fear of rejection and towards a willingness to keep trying to improve ourselves.

With interesting stories and actionable advice to try (in particular Altucher’s daily practice), the book is all about gaining the freedom that comes with being the master of yourself. As Epictetus said two thousand years ago, “No man is free who is not master of himself.”

And drawing from Epictetus again, Altucher says our lives will be better if we focus only on what we can control:

“And obsessing on the things we can’t control is useless. It takes us out of the game. We have to choose to be in the game.“

In similar fashion to Choose Yourself, Reasons to Stay Alive presents the painful experiences of the author followed by the clear steps he took to recover from them.

The book is a moving account of Matt Haig’s battles with depression and anxiety and what he has done to “live better, love better and feel more alive”. The short chapters make it easily readable and despite the dark times described, there is an overall sense of optimism that life can get better.

I found Stoic parallels in how Haig talks, as Seneca did, about the shortness of life and how small a part we play in the world. It’s thoughts like these that help us maintain a healthy perspective on life and encourage us to make the most of the time we have.

There is a line on this theme that almost sounds like it came from Seneca himself:

“Imagine all the time we had was bottled up, like wine, and handed over to us. How would we make that bottle last? By sipping slowly, appreciating the taste, or by gulping?”

When a person suffers from depression or anxiety, it is because they have been cut off, disconnected, from something they innately need but have lost at some point. That’s the conclusion Johann Hari draws in his book Lost Connections – that every social and psychological cause of depression and anxiety scientists have discovered is a form of disconnection.

The book offers seven separate means of reconnecting depending on what a person has lost. I wrote a full blog post on how Stoicism can be found in each reconnection which you can check out here.

Hari’s take on our desire to accumulate possessions is one the Stoics would have approved of:

“Materialism leaves you constantly vulnerable to a world beyond your control.”

According to Hof’s website, the method can be defined by its simple, easy-to-apply approach and its strong scientific foundation:

“It’s a practical way to become happier, healthier and stronger.”

The book of the same name describes the method in detail and tells Hof’s backstory, including how he came to be known as The Iceman.

Much of Hof’s teaching encourages students to use the power of their minds to realise the potential they have within them. This is done in part through cold exposure – in other words, expanding one’s comfort zone by coping with discomfort.

The Stoics were known to practice discomfort in a similar way so that future discomfort wouldn’t be so disruptive to them. Indeed, Cato the Younger would often go barefoot in advserse weather conditions.

“The soul resides within us,” says Hof. “It is within our reach if we know where to look for it.”

It’s the same power that comes from self-examination Marcus Aurelius was talking about in his Meditations:

“Look well into thyself; there is a source of strength which will always spring up if thou wilt always look.”

Have you read any of these books? Let me know on Twitter if you saw the Stoicism in them too!

Interview With Daniel Vargas, Creator Of The Stoic Sage