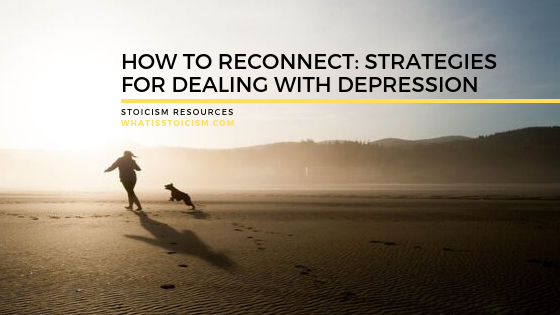 When a person suffers from depression or anxiety, it is because they have been cut off, disconnected, from something they innately need but have lost at some point. That’s the conclusion Johann Hari draws in his book Lost Connections – that every social and psychological cause of depression and anxiety scientists have discovered is a form of disconnection.

We can become disconnected from things like meaningful work (do you dread going to your job every day?), other people (do you feel isolated?), or a secure future (do you have financial worries?). Just like our devices being disconnected from WiFi leaves us feeling lost, trying to remember what we did before we could connect to everyone and everything, offline disconnections lead to the same feelings of emptiness.

When we are disconnected from meaningful things in real life we become bored and may eventually begin to question our existence, which can be tantamount to depression. As Viktor Frankl wrote in Man’s Search For Meaning, “The existential vacuum manifests itself mainly in a state of boredom.”

The solution, to both online and offline disconnection, is the same – we need to reconnect.

Reconnecting gives us meaning outside ourselves, the opportunity to experience more of what life has to offer.

Lost Connections offers seven separate means of reconnecting depending on what a person has lost. I’m adding my own commentary to each of them here, but I do recommend that you read the book if this topic interests you.

Reconnection One: To Other People

“The more one forgets himself—by giving himself to a cause to serve or another person to love—the more human he is and the more he actualizes himself.”

According to findings by neuroscience researcher John Cacioppo, feeling lonely causes as much stress as being punched by a stranger. Further tests run by Cacioppo, full details of which can be found in Lost Connections, found lonely people to be anxious, pessimistic, and have low self-esteem. Contrary to what seems obvious, loneliness doesn’t necessarily mean being alone. Loneliness, Cacioppo says, isn’t the physical absence of other people, it’s the sense that you’re not sharing anything that matters with anyone else.

We simply cannot live fulfilling lives without sharing experiences with other humans, supporting them, and allowing them to support us. Focusing on someone other than yourself and unconditionally wishing the best for them a great way to lift your own mood. Contact an old friend, make new friends, join a club or group, or just open up more to a trusted family member – whatever it is, share something meaningful with someone else.

Research by the University of Essex, in which more than five thousand households were tracked for three years, found that people who moved from cities to green, rural areas saw a big decrease in depression, while people who moved away from green areas saw a big increase in depression. Another study showed that even the inhabitants of deprived inner-city areas with some green space suffer less stress and despair than similar inner-city areas without green space.

Social prescribing is when health professionals refer patients to support in the community, in order to improve their health and wellbeing. This often involves a constructive pursuit in nature, for example a GP referring a person to a local gardening group to help with isolation and confidence. Faced with a natural landscape, you have a sense that you and your concerns are very small, and the world is very big – and that sensation can shrink the ego down to a manageable size.

“We must go for walks out of doors, so that the mind can be strengthened and invigorated by a clear sky and plenty of fresh air. “

Seneca The Younger, On Peace of Mind 17.8

“What man actually needs is not a tensionless state but rather the striving and struggling for some goal worthy of him.”

In Lost Connections, Hari provides the statistic that only 13 percent of people have jobs they find meaningful. Based on his research, work can make us sick (mentally and/or physically) in three ways – the feeling of being controlled, the feeling that no matter how hard you work, nobody will notice, and the feeling of being low on the hierarchy. Notice that it’s not necessarily the task someone performs at work that makes them unhappy, but the structure and meaning behind that task.

Hari presents the idea of a cooperative – a democratic workplace where the workers own and manage the business – and gives an example of people who found greater meaning by working in such an environment. He writes that a cooperative provides several forms of reconnection – reconnection to work that you have chosen, reconnection to a sense of status, and reconnection to the future. Not everyone can leave their job to form a cooperative of course, but perhaps seeking more autonomy is a good way to find increased meaning in any job.

In line with Stoic principles, studies indicate that a strong desire for materialistic pursuits can cause a person to experience less joy and more despair. We are constantly being pressured to want more and buy more so that we can flaunt our superiority. This creates a permanent sense of dissatisfaction as we feel that our happiness will improve with each materialistic purchase of the latest “thing”.

Reconnection Five: Sympathetic Joy, and Overcoming Addiction to the Self

“Meditate often on the interconnectedness and mutual interdependence of all things in the universe. For in a sense, all things are mutually woven together and therefore have an affinity for each other—for one thing follows after another according to their tension of movement, their sympathetic stirrings, and the unity of all substance.”

Too often, we see other people’s achievements and compare them with our own, voluntarily stoking up feelings of inadequacy and jealousy in ourselves. We see the things wealthy people buy, the size of their houses and the holidays they take. We see people publicly congratulating themselves for their achievements on social media. We think we’d love to be in their position. What we don’t know, what we can’t know for sure, is how they really feel inside.

As Jordan B. Peterson writes in 12 Rules for Life, we should compare ourselves to who we were yesterday, not to who someone else is today. In other words, we should seek to improve ourselves day by day than to measure our progress by anyone else’s standards. To combat jealous emotions, we can try practising sympathetic joy, which is a form of meditation used to cultivate appreciative joy at the success and good fortune of others (even those we do not care for).

“It’s not what happens to you, but how you react to it that matters.”

Drawing on personal experience, in Lost Connections, Hari discusses childhood trauma – one psychological cause of depression and anxiety. He writes that when a child experiences something traumatic, they almost always think it’s their fault. A person who thinks they deserved to be injured as a child isn’t going to think they deserve much as an adult, either, he concludes.

Studies suggest that it’s not just childhood trauma itself that causes depression and anxiety – it’s hiding away the childhood trauma. A sense of shame grows when the memories are locked away and the narrative developed in the mind is never questioned. One person telling someone who’s important to them something they regard as shameful about themselves, and realising that the person still accepts them, can be a transformative first step to overcoming childhood trauma (and thus getting to the root cause of depression and anxiety).

“Never let the future disturb you. You will meet it, if you have to, with the same weapons of reason which today arm you against the present.”

The feeling of life not having turned out as we had anticipated is a stifling one. Bad days can seem endless when we feel trapped in a routine not of our choosing. Anxiety prevails when we’re working paycheck to paycheck just to maintain an acceptable standard of living, and have no spare time or money to pursue things we find meaning in. When hopes and dreams cultivated since childhood seem to have drifted away it becomes difficult to foresee a bright future, or any future at all.

In Lost Connections, Hari describes universal basic income, the concept of a country’s government unconditionally providing every citizen with enough money to survive on. A 1970s experiment in the small Canadian town of Dauphin saw each of its population of  17,000 given the equivalent of $19,000 (in today’s money) as a no-strings-attached income. According to the medical records of the participants, depression and anxiety in the community fell significantly as people worried less about their financial security and the stability of their future.

This solution is obviously not one that is currently within our own control, and one that we may never experience. The best way we can deal with the future is to give the present our full attention. Even with the best preparation, even with enough money, we can and will still have unexpected circumstances to deal with in the future. As Seneca The Younger wrote, “The whole future lies in uncertainty: live immediately.”

In Lost Connections, Johann Hari argues throughout that the narrative we have been fed (in no small part thanks to the efforts of pharmaceutical companies) in recent years – that depression and anxiety are solely caused by inherited genes – is inaccurate. To accept that the cause is always biological is to accept that the “fix” is always medication. To debunk this, Hari examines psychological and social causes of depression like loneliness, lack of fulfilment, trauma, and disconnection from nature, before offering ways to confront these issues (and evidence of where that has succeeded).

And it is the confronting of issues that is key to coping with the social and psychological factors of depression and anxiety. While medication may help with the symptoms, a person must go deeper to acknowledge and deal with the root cause.

As Marcus Aurelius wrote (Meditations 5.20), “The impediment to action advances action. What stands in the way becomes the way.” We need to take action if we are to reconnect.