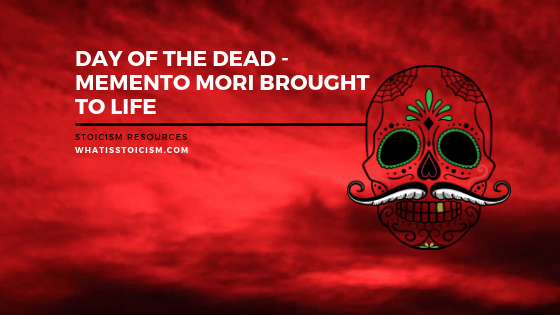 You could leave life right now. Let that determine what you do and say and think.

This Stoic reflection on the impermanence of life is known as Memento Mori, which is Latin for “remember you will die.”

It’s a constant reminder not to take your time on earth for granted and not to worry about things beyond your control. It’s not, however, just a thought to keep in mind for the introspective person sitting pondering alone.

Day of the Dead

From 16th and 17th century European paintings to Tibetan masks to multi-day Mexican festivals, the practice manifests itself in many different ways across the world.

One of the most popular is the Day of the Dead festival, which is skilfully referenced by Don Winslow in his gripping novel The Power of the Dog:

It’s the Day of the Dead. Big day in Mexico. The tradition goes back to Aztec times and honors the goddess Mictecacihuatl, “Lady of the Dead,” but the Spanish priests cleaned it up and moved it from midsummer to autumn to make it coincide with All Hallow’s Eve and All Souls’ Day.

Winslow goes on to explain the Mexican relationship with mortality:

The Mexicans, they don’t mind talking about death… They don’t try to keep it at arm’s length. They’re tight with death, intimate with it. They keep their dead close to them. On El Día de los Muertos, the living go to visit the dead. They cook elaborate dishes and take them to the cemeteries and sit down and share a nice meal with their dearly departed.

The setting of the scene comes as Winslow’s main character Art Keller, a DEA agent investigating the drug trade from Mexico to USA, struggles with his divorce and seeing less of his children. In thinking about the Day of the Dead, he is forced to assess how he is living his life, such is the nature of Memento Mori:

Shit, Art thinks, I’d like to share a nice meal with my living family. They live in the same city, occupy the same physical space and time, and yet somehow we’re all on separate planes of existence.

The Day of the Dead is celebrated throughout Mexico, however some regional variations exist. In the Mexican state of Aguascalientes for example, the Festival de Calaveras has been running since 1994. This “Festival of Skulls” draws from the Day of the Dead traditions as well as paying homage to José Guadalupe Posada.

Posada was a Mexican printmaker and engraver whose use of skulls was a constant reminder of death. The following quote attributed to him is in-keeping with his art:

Todos somos calaveras — We are all skeletons.

A quote from the Stoic philosopher Epictetus, which Marcus Aurelius references in his Meditations (4.41), serves the same purpose:

You are a little soul carrying around a corpse.

In both cases we are made acutely aware that no matter how different our lives are to one another, we all end up the same.

Some of Posada’s works were used to accompany “literary calaveras” — short, humorous poems, which were often sarcastic tombstone epitaphs that poked fun at the living. These compositions further demonstrate the close, even jovial, association to death of those celebrating the Day of the Dead.

After reading some examples, you might even have some fun trying it yourself:

Mezcal Worm
No more will he burrow
No more will he squirm.
He’s not underground,
Which is bad for a worm.
But don’t be too sad,
Let no frown cloud your face.
Believe me, he’s gone to a happier place.

One of the most prominent icons of the Día de los Muertos and the Festival de Calaveras is La Calavera Catrina. The symbol began as a zinc etching by Jose Guadalupe Posada depicting a female skeleton in an elaborate hat, which he called Calavera Garbancera. As Posada’s art often did, it satirised Mexican society’s emulation of European sophistication.

In 1947, artist Diego Rivera featured Posada’s skeleton in his mural “Dream of a Sunday Afternoon in Alameda Park”. Rivera called his creation Catrina, meaning “the rich”. Today the Calavera Catrina, or elegant skull, is synonymous with the Day of the Dead.

Skulls and poems, skeletons and festivals, food and murals. A lot of people go to a lot of effort to remind themselves of death while honouring the dead. As grim as that sounds, the reality is not as morbid as you might expect. The poems are humorous, the festivals are fun and the murals are colourful.

The same goes for the practice of Memento Mori. The intention is not to feel sad that life is short, that we all die. It is to remind us that although we’re all headed to the same destination, we should enjoy the journey while it lasts. And don’t wait until someone’s gone to have a meal with them.

How To Deal With Harsh Truths