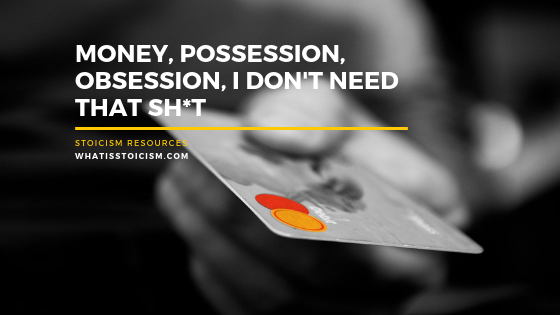 Most of us are guilty of regularly buying things we don’t need.

Maybe it’s an unmissable sale that tempts us to add to our growing number of possessions, maybe we think that new purchase will make us feel good, or maybe we’re just trying to impress people.

Later we realise that the price of the item was intentionally increased prior to the sale, that once the novelty wears off it’s just another possession that has no bearing on our happiness, or that we don’t even like the person we were trying to impress.

As a defence against these types of regrets, the Stoics advocated restraint in the pursuit of wealth and possessions. Musonius Rufus, in particular, emphasised that although wealth can give us access to physical luxuries, it can’t bring contentment or banish grief.

People who achieve luxurious lifestyles are rarely satisfied: Experiencing luxury only whets their appetite for even more luxury.

In defense of this claim, Seneca asks his friend Lucilius to imagine that he has become magnificently wealthy, that his house has marble floors and is decked with gold, and that his clothing is royal purple.

Having all this, he observes, will not make Lucilius happy: “You will only learn from such things to crave still greater.”

Or to paraphrase Papa Roach, the things you own end up owning you.

So why do we still buy so many things? Sometimes I blame it on the Joneses. Everyone knows the Joneses, and everyone has tried to keep up with them at some point. Sometimes I blame necessity – I really need that thing to make my life easier. But every time I take cash or a credit card out of my wallet for something that doesn’t fulfil a basic human need (such as food or shelter), I can only blame myself.

Given the huge amount of products, gadgets and general consumption available to us, it would be easy to believe that the more we acquire, the closer we’re getting to perfection. It’s easy to think if I can just get that next thing then I won’t need anything else.

What’s harder is to have fewer things and think I’m content with what I have.

It’s harder to adopt that Stoic mindset of wanting what you already have, but how much simpler does it make life? With that mindset we don’t need to pay £1500 for the latest phone which doesn’t do much our current one can’t; we don’t need to make costly subscriptions to streaming services when we’re only using them to fill otherwise idle time; we don’t need to impress people with what we own.

If you’re aware of The Minimalists, you’ll have seen some of this mindset in action. Despite achieving the cliched trappings of success early in their careers – six-figure salaries, luxury cars, and oversized houses – they weren’t satisfied. Worse, they say that working to buy more things resulted in “debt, stress, anxiety, fear, loneliness, guilt, overwhelm, depression.”

Papa Roach, Between Angels and Insects

According to The Minimalists, consumption isn’t the problem – compulsory consumption is the problem. We all need some material things. But if everything we own serves a specific purpose or brings joy then everything else is out of the way, allowing greater focus on what’s important – health, relationships, passions, growth, and contribution.

We can also maintain that greater focus by asking ourselves some simple questions when taking stock of our possessions:

Based on the answers you’ll know if you really need that thing.

Another question that serves to refocus is “What is my end goal here?” Put another way, what am I working for, what is this money going towards? I can’t think of a better way to illustrate the point of this question than the Fisherman and the Businessman story.

And there are few better or more elegant ways of summarising all the preceding words than Michaelangelo’s description of beauty as “the purgation of superfluities.”

How to Keep a Stoic Journal – 7 Days of Example Entries

Interview With Kai Whiting – Author Of Being Better