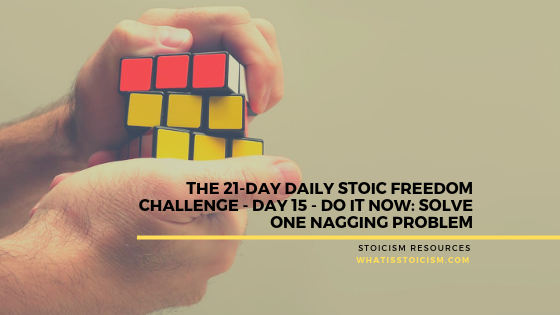 This is an account of day 15 of the 21-Day Daily Stoic Freedom Challenge, for accounts of other days please click here.

The task for day 15 of the 21-Day Daily Stoic Freedom Challenge is to solve one nagging problem. The more we delay tending to problems, completing outstanding tasks, the more anxiety they cause us. What starts as something small becomes something big by taking up more and more of our time in thinking about it – until it’s done we keep telling ourselves, “I really need to make time for that.” The goal of today’s task is to gain freedom from such problems – to get them closed off so they don’t occupy space in our minds any longer.

The instructional email from the Daily Stoic tells us how to go about it:

Today, make a list of all the problems you’ve been trying to ignore, all the work you’ve been pushing off that you know could solve those problems. Now, pick one. Then set yourself to solving it so at the end of the day, when you’re reflecting on the day’s events in your journal, you can cross it off the list.

“You cannot escape the responsibility of tomorrow by evading it today,” Abraham Lincoln said. We cannot spend the day planning—we must spend it doing. That thing you’ve been meaning to pick up for the house, go get it today. Don’t wait until “the next time I’m near the store.” The check engine light is on in your car, get it taken care of today. Tooth’s been aching? Call and make the appointment.

The productivity guru David Allen has a good rule: “Don’t touch paper twice.” That is, if you’re looking at an email or you get a memo in your inbox, punting it to later is actually making more work for yourself—because you’ve already spent some time on it, however small, and in so doing you’ve allowed it to carve out a place in your conscious mind that it will not leave until you take care of it. What was minor now builds and builds until, before we even realize it, it’s a major problem that has the capacity to bury us. Conversely, you’ll see that by crossing off minor nagging problems, you can create real momentum. Answer those emails you’ve “starred” for later, then see if you can stick to the don’t-touch-paper-twice rule.

In my office there’s a communal kitchen where everyone can prepare their lunch and wash their dishes afterwards. For washing dishes there’s a handy brush that can be filled with washing up liquid which then gets slowly dispensed through the brush pad as the dish is being scrubbed. The layer of the pad which makes contact with the dish has a slight roughness to it for the removal of stubborn stains.

For about a month now that layer has been non-existent, worn away from the daily use of dozens of people. The pad is now just a grubby sponge, likely saturated with germs, and capable of removing only the most soluble of food stains. For a while, I’ve been telling myself every day that I’d replace the filthy pad so that I, and others, won’t be forced to wash dirty dishes with it. Today’s task prompted me to finally sort it out – I bought a new pad and replaced the old one. It felt good to do something that will benefit both myself and my work colleagues, and now that daily hygiene worry is gone.

A small fix, but a worthwhile one.

In the challenge’s group Slack channel, fellow participant Jamison echoed the sentiment that often what we’re putting off doesn’t take that long at all:

Day 15: Since I had some spare time yesterday, I took care of several lingering house tasks, some have been lingering for over a year. All 4 tasks together took an hour. Amazing what we put off for so long when it really doesn’t take that much time.

Small problems can often be the most nagging. We put them off for exactly that reason – they’re small. We think we should be directing our time towards bigger things. But putting off dealing with small problems means they continue to nag. Solving problems like this relieves us from the nagging. Just don’t get caught up in a proverbial game of “whack-a-mole”, don’t jump on every small problem you see – only focus on the important ones, those that have negative consequences if they aren’t dealt with.

Six Ways Stoicism Is Helping Me Train A Puppy